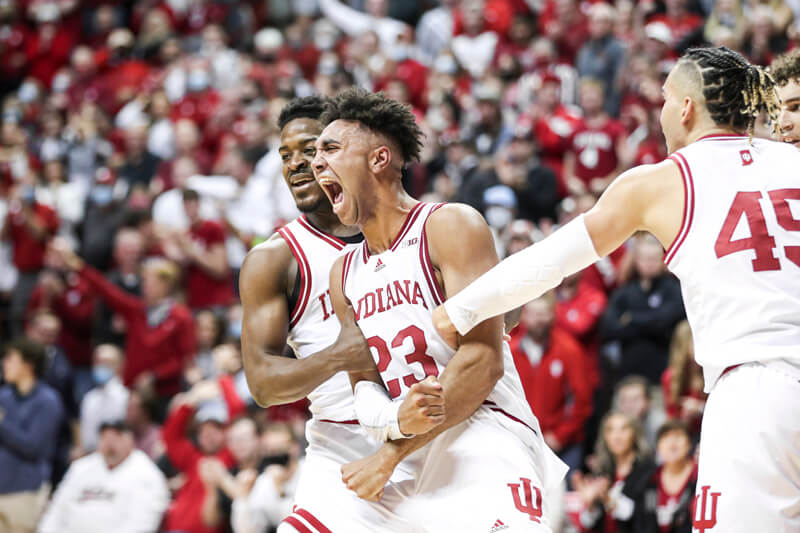 Tip times and TV designations were announced on Thursday by the Big Ten for most games on the 2022-23 schedule.

Our 2022-23 Indiana basketball schedule page is now updated with all of the known tip times and TV designations.

ROSEMONT, Ill. — The Big Ten announced the start times and television designations for the 2022-23 men’s basketball conference schedule on Thursday, which includes all 140 contests set to be broadcast nationally. The conference also revealed tip times and network assignments for select non-conference games.

The Big Ten schedule gets underway Dec. 2-11 before resuming on Dec. 29. Conference play will build up to the 2023 Big Ten Men’s Basketball Tournament, set for March 8-12 at the United Center in Chicago, marking the 11th time the city will host the event. All 14 teams will advance to the tournament, with two first-round games slated for Wednesday, March 8. The top four teams will receive first- and second-round byes and advance to the quarterfinals on Friday, March 10.

BTN will open its conference schedule on Friday, Dec. 2, as Illinois visits Maryland for a 7 p.m. or 9 p.m. ET tip.

FOX Sports will debut conference action this season with Maryland traveling to Michigan on Jan. 1 at 4:30 p.m. ET on FS1.

CBS Sports’ first conference match-up of the season will see Indiana host Wisconsin on Jan. 14 at 1 p.m. ET on CBS.

BTN will televise the first 10 games of the 2023 Big Ten Men’s Basketball Tournament, with CBS Sports broadcasting the semifinals and championship game on CBS for the 26th consecutive year.

Start times and television designations for the 2022 Big Ten/ACC Challenge will be announced at a later date and will be carried on ESPN networks.

All BTN, FOX and FS1 on-air games will also be streamed nationwide via the web, smartphones, tablets and connected devices on the FOX Sports App. Games airing on an ESPN network will also be available on the ESPN App to authenticated pay TV subscribers. CBS Sports’ broadcast coverage will be available to stream live on Paramount+, with additional coverage on CBSSports.com and CBS Sports HQ.

And the release from IU:

The Big Ten Conference today has announced times and television designations for it’s men’s basketball programs and the exposure for the Indiana Hoosiers will be extensive with league TV partners BTN, CBS, ESPN/ESPN2, FS1 and FOX all showing some of the best matchups for the Cream and Crimson this season.

CBS will televise three games from Simon Skjodt Assembly Hall this season. Matchups on back to back weekends with IU hosting Wisconsin on January 14 and Michigan State on January 22 will be shown. The Hoosiers also will host Michigan on March 5 in the regular season finale for both teams.

IU will appear on the ESPN family of Networks seven times this season beginning with the Big Ten/ACC Challenge game against North Carolina on November 30. No start time has been announced yet. On the road, games against Maryland on January 31, Michigan on February 11 and Michigan State on February 21 will air on ESPN or ESPN2. At home, matchups against Purdue on February 4, Illinois on February 18 and Iowa on February 28 can be seen.

The Hoosiers will play three prime time games on Fox as they showcase IU against Arizona on December 10, a home game against Ohio State on January 28 and the road version of the IU/Purdue rivalry February 25.

FS1 will be the TV home for the Hoosiers four times beginning with November 18 matchup with Xavier in the Gavitt Games in Cincinnati. Three Big Ten games also will air on FS1 including Iowa on the road January 5, Northwestern on January 8 in Bloomington and Illinois on January 19 in Champaign.

Three games to start the season will be streamed on BTN+ including exhibition games against Marian on October 29, St. Francis on November 3 and the season opener against Morehead State on November 7. Several options are available at Bigtenplus.com for team or full conference passes which include all IU sports which appear on BTN+.

The December 17 game against Kansas will announce its time and TV designation at a later date.