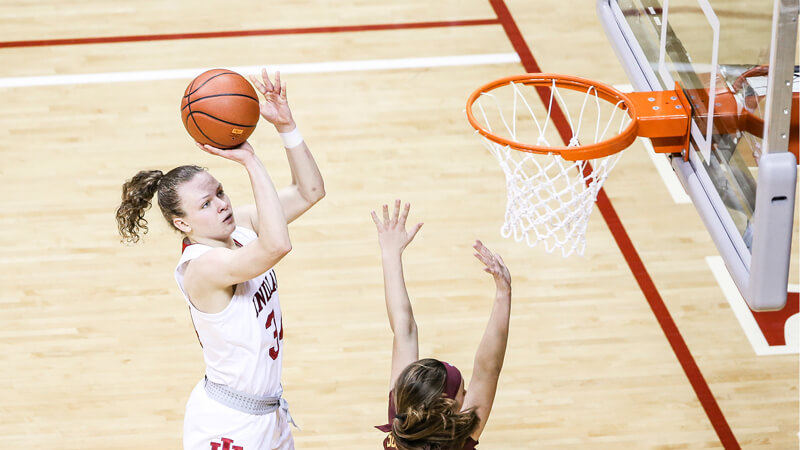 Two consecutive trips to the Sweet Sixteen, two seasons with over 20 wins and two teams who left a lasting mark on the legacy of Indiana women’s basketball. There’s a chance to make it three.

The Hoosiers have a lot of eyes and expectations on them this season, and with their schedule, they are primed for the opportunity to live up to the excitement surrounding them. Indiana’s non-conference schedule is not overly challenging, and conference play will be tough — but for one of the top teams in the Big Ten, it will be a hill, not a mountain, to climb.

The Hoosiers begin their season on Nov. 8 against the University of Vermont at Simon Skjodt Assembly Hall. The Catamounts, part of the America East conference, are coming off a 20-11 2021-22 season. However, despite their success, it’s likely they won’t pose too much of a challenge to the Hoosiers.

At first glance, the two biggest games to watch on Indiana’s non-conference slate are against the University of Tennessee (Nov. 14) and the University of North Carolina (Dec. 1). Some other teams on the schedule could bring good competition, but no other games will be as highly anticipated as those two.

The Hoosiers and Volunteers will face each other in Knoxville for the third meeting in program history, with the Hoosiers looking for their first-ever win over the Vols. In the two teams’ last matchup in 2020, Tennessee won in a 66-58 upset in Bloomington.

Last season, the Volunteers posted a 25-9 record with only two losses at home. They also reached the Sweet Sixteen, like Indiana, before losing to Louisville. The Vols return a sizable chunk of their 2021-22 roster, including top scorer Jordan Hurston and top rebounder and post defender Tamari Key.

The game against Tennessee will only be the third of the season for Indiana, therefore acting as the first true litmus test for the Hoosiers, and the first big chance for them to make a splash in a national way.

The other opportunity to make waves nationally comes in the Big Ten-ACC Challenge when Indiana welcomes UNC to Bloomington on Dec. 1. It will be the first time the two teams have met since 1988, and the Hoosiers will once again be looking for their first win over the Tar Heels.

The Tar Heels are coming off a 25-7 season where they reached the NCAA regional semifinals before falling to South Carolina. They return top talent as well, including top rebounder Alyssa Ustby and leading scorer Deja Kelly.

As the last game before Big Ten play begins, UNC should be one last chance for Indiana to fine-tune its play against a tough opponent.

Indiana will see all 13 Big Ten opponents at least once this season. Home-and-home competitions feature Iowa, Purdue, Michigan, Illinois and Ohio State. The Hoosiers will host one game against Nebraska, Maryland, Rutgers and Wisconsin respectively, while traveling to Northwestern, Michigan State, Penn State and Minnesota.

It’s no secret who the “top dogs” of the Big Ten are going into the season: Indiana, Iowa, Ohio State and Maryland. Nebraska is on the edge of that conversation, with a good chance to be solidly in the mix once the season gets underway.

Arguably the biggest competitor for Indiana is Iowa — the Hoosiers lost all three games they played against the Hawkeyes last year, including the Big Ten championship. The mindset of “revenge games” wouldn’t be unlikely, and with the addition of Sara Scalia to match up against Caitlin Clark, competition will be fierce on all ends of the floor.

Both games take place in February, with Iowa traveling to Bloomington on Feb. 9 and Indiana heading up to Iowa City to close out the regular season on Feb. 26.

Purdue is a notable opponent if only for the fact that it’s the rivalry of Indiana vs. Purdue. However, with recent games full of tension and high-level basketball, the in-state rivalry has resurfaced as one of the more important areas of the schedule. The Boilermakers are set to host the first game on Feb. 6, and the Hoosiers will host on Feb. 19.

With four games against Iowa and Purdue in February alone, the final month of the regular season is shaping up to be the toughest for Indiana. The Hoosiers will also play Ohio State (Feb. 13) and Michigan (Feb. 16), both of which will be formidable opponents.

Many of the teams Indiana will face have strong veteran presences and deep talent. Indiana has slightly less of a veteran team with its transfers and freshmen, but the team could just as easily click into place. The bottom line is this: the Big Ten has always been one of the most competitive conferences for women’s basketball, and this season is bound to fully support that.