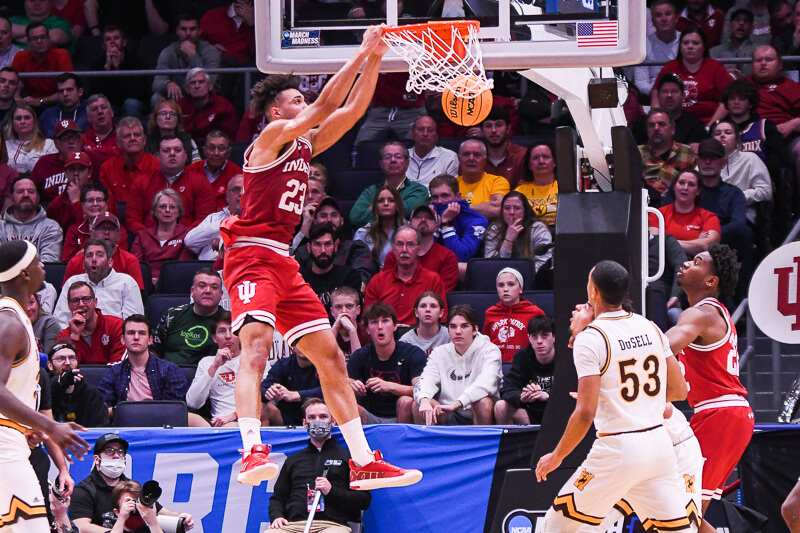 Tip time and ticket information for Indiana’s game against Arizona in Las Vegas that is set for Saturday, December 10 is now available.

Tickets go on public sale on Saturday, Aug. 27 at 1 p.m. ET at http://axs.com Tickets start at $49 (prices are inclusive of tax and facility fee) and are good for both games (UNLV/Washington State is the other game).

The full release, issued by bdG Sports, is available below:

“Playing a high-level opponent like Indiana in Las Vegas will be a great opportunity for us and our fans,” said Arizona coach Tommy Lloyd. “It will be a strong test against one of the preseason favorites from the Big Ten in an outstanding atmosphere. It’s one of those games that will have a special feeling around it and we are looking forward to it.”

Pac-12 powerhouse Arizona is no stranger to Las Vegas as the Wildcats won last year’s Roman Main Event at T-Mobile Arena which helped propel the program to a top-5 ranking and a No. 1-seed in the NCAA Tournament. Coach Lloyd has reloaded quickly after having three players selected in the first 33 picks of the NBA Draft. Arizona will be led by returning First Team All Pac-12 honoree Azuolas Tubelis and fan favorite Kerr Kriisa in addition to Pac-12 Sixth Man of the Year Pelle Larsson with Oumar Ballo anchoring the post. Arizona’s new faces will include high-impact transfers Courtney Ramey and Cedric Richardson along with newcomers like five-star prospect Kylan Boswell, Dylan Anderson, Filip Borovicanin and Henri Veesaar.

Excitement is just as high in Bloomington where coach Mike Woodson has reinvigorated the Hoosiers program. IU All-American Trayce Jackson-Davis tested the NBA waters before announcing his return to the Hoosiers. The third-team All-American will be the third-leading returning scorer in college basketball next season after averaging 16.9 points per game last season. The Hoosiers finished 21-14 in 2022 and advanced to the NCAA Tournament for the first time since 2016. The Hoosiers also advanced to the Big Ten Tournament semifinals for the first time since 2013 after knocking off Michigan and top-seeded Illinois.

“Our program is thrilled to have the opportunity to play Arizona in Las Vegas,” said Woodson. “We have fans throughout the country who are looking forward to making this trip between Thanksgiving and Christmas and I love the fact that two programs that have won a national championship will meet for the very first time. It should be one of the top non-conference matchups prior to conference play starting.”

bdG has worked for many years with UNLV to create attractive doubleheaders on the famed Las Vegas Strip when the Rebels are displaced from its own arena each December due to the rodeo.

“This is another step in helping Coach Kruger rebuild the great brand of UNLV basketball by creating a national event to showcase Runnin’ Rebels basketball,” said Brooks Downing, founder and CEO of bdG Sports. “All eyes will be on Grand Garden Arena for this doubleheader; it will be a tremendous crowd, national television and the talk of the sport that weekend.”

“We are excited to be a part of the Las Vegas Clash doubleheader and to have the opportunity to face a strong Pac-12 team in Washington State on the Las Vegas Strip,” said Kruger. “The MGM Grand Garden Arena is a great venue for college basketball and we are looking forward to our fans joining us while the Thomas & Mack Center hosts the rodeo.”

Washington State continues to rise under coach Kyle Smith. The Cougars won 22 games last season in Smith’s third year at the helm and earned the school’s first postseason berth in more than a decade finishing the season in the NIT semifinals at Madison Square Garden in New York. WSU will be led by returning starters TJ Bamba and Mouhammed Gueye and a top-40 recruiting class.

“We are excited to participate in the Las Vegas Clash,” said Smith. “This is an opportunity for us to go on the road and compete against a quality opponent in Las Vegas. It will give our kids a good prep for our conference tournament. With our strong finish last year and our growth as a program, we have made a commitment to playing in nonconference events that will get us ready for the Pac-12 and NCAA. The Las Vegas Clash is a perfect fit for our philosophy. To be associated with storied programs like UNLV, Arizona, and Indiana in a high profile event is a tribute to the hard work that our players have put into the program.”

Tickets for the doubleheader go on public sale on Saturday, Aug. 27 at 10 a.m. PT at www.axs.com. Tickets start at $49 (prices are inclusive of tax and facility fee) and are good for both games. Complete event information can be found at www.lasvegasclash.com and on social media at @VegasMainEvent.