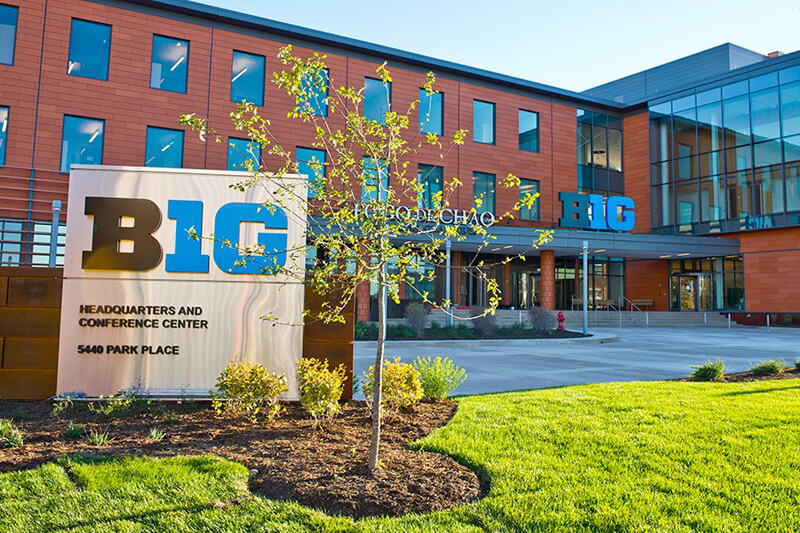 Just months after UCLA and USC pledged to join the league, the Big Ten announced its new media rights deal on Thursday morning.

The 7-year deal is believed to be worth more than $7 billion.

Here’s the full release from the Big Ten on its historic media rights deal, which is believed to be the largest in college athletics:

The Big Ten Conference announced today that it has reached distribution agreements with CBS, FOX, NBC and NBCUniversal’s Peacock. The breadth of new partners, in addition to Big Ten Network (BTN) and FS1, will place conference football, women’s and men’s basketball and Olympic sports student-athletes on the biggest stage and provide fans with the most exciting matchups across traditional over-the-air linear television and direct-to-consumer streaming. These landmark media rights agreements are the most comprehensive in all of college sports and further strengthen the tradition of the Big Ten Conference.

Big Ten Conference football will dominate Saturdays, beginning in the fall of 2023 on the largest broadcast platforms from morning to night, with FOX at Noon ET, CBS at 3:30 p.m. ET and NBC in Prime Time. With the addition of the University of California, Los Angeles (UCLA) and the University of Southern California (USC) in August 2024, the conference, its student-athletes and member institutions will reach the broadest audience in the country, coast-to-coast, including the top three media markets in the country in New York, Los Angeles and Chicago. The media rights agreements will begin July 1, 2023, and run through the 2029-30 season.

“The Big Ten Conference media rights agreements are more than just dollars and deals. They are a mechanism to provide stability and maximum exposure for our student-athletes, member institutions and partners during these uncertain times in collegiate athletics,” Big Ten Conference Commissioner Kevin Warren said. “We are very grateful to our world-class media partners for recognizing the strength of the Big Ten Conference brand and providing the incredible resources we need for our student-athletes to compete at the very highest levels, and to achieve their academic and athletics goals.”

“The Big Ten has been a valued partner for more than three decades and we are thrilled to expand that relationship by adding Big Ten football to our portfolio of marquee properties,” said Sean McManus, Chairman, CBS Sports. “The combination of CBS Sports’ proven record in elevating college conferences to new heights, our standard of excellence and the strength and reach of Paramount Global’s linear and digital platforms, will create a powerful showcase for the Big Ten and its student-athletes. Together with Kevin Warren and the team at the Big Ten, we look forward to growing the conference to the highest of levels, reaching the widest audience.”

“We are proud to expand upon our long-standing partnership with the Big Ten Conference and further bolster our position as the premier rights holder of the conference,” said FOX Sports Chief Executive Officer and Executive Producer, Eric Shanks. “Commissioner Warren’s leadership and vision have resulted in the growth and recent market expansion of the Big Ten Conference. In an ever-evolving landscape, the Big Ten remains the most storied collegiate athletic conference in the country.”

“We are incredibly excited to be partnering with Kevin Warren and the Big Ten Conference on this robust package of sports,” said Pete Bevacqua, Chairman, NBC Sports. “With Big Ten Saturday Night and Sunday Night Football headlining each fall weekend in primetime on NBC and Peacock, along with our historic Notre Dame Football partnership, NBC Sports will be the home of premier games in college football and the NFL. In addition, with the rights to a wide range of Big Ten events, Peacock and NBC Sports will be a year-round destination for the best in college sports.”

“The new rights agreements are an incredible achievement for our entire conference and a true testament of what can be accomplished with teamwork,” stated Commissioner Warren. “I am incredibly grateful for collaborative efforts and hard work of our conference staff, specifically Laura Anderson, Anil Gollahalli, Kerry Kenny and Adam Neuman, our presidents and chancellors, athletics directors, coaches, student-athletes, and our partners at CBS, NBC and FOX Sports for solidifying unprecedented Big Ten access across transformative media companies for our fans to tune-in and follow the Big Ten content they love.”

BTN will maintain its strong position as the home for Big Ten fans, as the network will continue to televise a full slate of football, basketball and Olympic sport competition throughout the entire year.

CBS’s initial season in 2023 will include seven football games and both regular season and postseason men’s basketball action, along with the Big Ten Women’s Basketball Tournament final appearing on CBS for the first time. The Big Ten Men’s Basketball Tournament semifinals and final will continue the tradition of airing on CBS, which they have done for 25 years. Every CBS Big Ten football and basketball broadcast will also be streamed on Paramount+, Paramount Global’s direct-to-consumer streaming service.

Starting in 2024, CBS will televise up to 15 regular-season football games per season, including an annual Black Friday game in the afternoon. CBS is America’s most-watched network for the past 14 years and the highest-rated college football network.

FOX has renewed its agreement to televise football and men’s basketball games each season, with the opportunity to carry additional sports throughout the year. The Big Ten Conference’s partnership with FOX reached its high point during the 2021-22 year, as FOX captured the #1 time slot in college football for the first time with its Big Noon Saturday platform that featured 10-14 games involving a Big Ten team, and a men’s basketball season that ended with the top three most watched games in the history of FS1 all featuring Big Ten programs.

NBC will produce 14-to-16 games on broadcast television each season as it introduces college football fans to Big Ten Saturday Night. Each Big Ten game on NBC broadcast will also be simul-streamed on Peacock, NBCUniversal’s direct-to-consumer streaming service. NBC Sports has established the most dominant primetime franchise in television history, as its Sunday Night Football has been primetime’s No. 1 show for an unprecedented 11 consecutive years – a streak that is currently active.

CBS, FOX and NBC will combine efforts to televise the seven Big Ten Football Championship Games during the term.