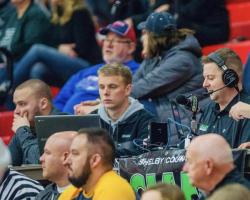 Competing against older players has become the norm for Trent Sisley. It started at home with his brother, Blake, who is playing at Wright State. Then he went from eighth grade hoops to varsity basketball. Now, the class of 2025 forward is playing up on Indy Heat’s Gym Rats 16U EYBL team.

And, as expected, Sisley is holding his own.

Coming off a freshman season in which he averaged 19.9 points, 9.2 rebounds, 1.6 assists and 1.3 blocks at Heritage Hills High School (near Santa Claus, Ind.), Sisley’s stock is currently rising after showing his mature skillset during the first two sessions of the Nike EYBL circuit in April. He received offers from Indiana and Purdue before ever playing a varsity game and has received recent interest from Cincinnati, Northwestern, Virginia and Wisconsin, he said.

“When they asked me to play up, I was like ‘heck yeah’. You want to push yourself and get better,” said Sisley, who is the No. 2 player in his class according to Prep Hoops Indiana. “I have been adjusting, but it has been fun. The physicality is just different. When you get in the lane, you learn to play off two feet. Now I am starting to settle in and play well. I think my stock is definitely rising.”

The 6-foot-7, 200-pound Sisley is playing on a talented Indy Heat team that features another Indiana in-state recruit for the 2025 class — Fishers High School point guard Jalen Haralson, who is the top player in the class according to Prep Hoops Indiana.

What makes Sisley unique, however, is his ability to handle and shoot the ball at his size. He shot 40 percent (21-for-52) from distance as a freshman, looks smooth with the ball in his hands and appears to play with a chip on his shoulder. Sisley, a high-motor player, can also grab an offensive rebound, take one dribble and throw it down with ease.

With a season of varsity basketball under his belt, Sisley was able to quickly adjust to playing up with Indy Heat.

“Varsity basketball was faster and more physical than eighth grade,” Sisley said. “Then I started getting doubled teamed and tripled teamed. I just had to learn to get used to it. Overall, my freshman season went pretty well. A goal for me now is to win the sectional and see how far we can go.”

Purdue was the first program to offer Sisley, which came on Sept. 29 of last year. IU extended an offer four days before his first high school game on Nov. 23.

“It was super cool; you grow up and see both of those teams (Indiana and Purdue) playing in the Big Ten and their big rivalry,” Sisley said. “You wish you could play on that stage one day. It was pretty crazy to receive offers from them before playing a high school game. Growing up, I was definitely an IU fan. But now I think both are great programs.”

“They also like that I have continued to get better,” Sisley said. “I can play inside against a smaller defender and can spread the floor and can play outside when I have a tall big on me. They want me to be a knock-down shooter and to be able to play on the wing. Getting stronger too is another thing.”

Indiana assistant coach Brian Walsh watched Sisley play at the end of April. He said the IU coaching staff has been as active as any program during his recruitment.

“Coach Walsh has been a super good recruiter so far,” Sisley said. “They (coaching staff) talk to my coaches a lot. They are pretty interested right now. I like how they turned things around last year. They are going in the right direction.”

Sisley will get back to work prior to Session 3 of the Nike EYBL circuit, which is set for May 27-30 in Louisville. He said he is primarily focusing on ball handling and shooting during various offseason workouts.

“During the offseason, sometimes we go in before school or we go at night,” Sisley said. “Sometimes we take a Monday off after an AAU tournament, but it is pretty much every day for me. Right now I am working on coming off cuts and shooting off the dribble and shooting off of ball screens. If I keep developing, I definitely see myself on the wing in college.”