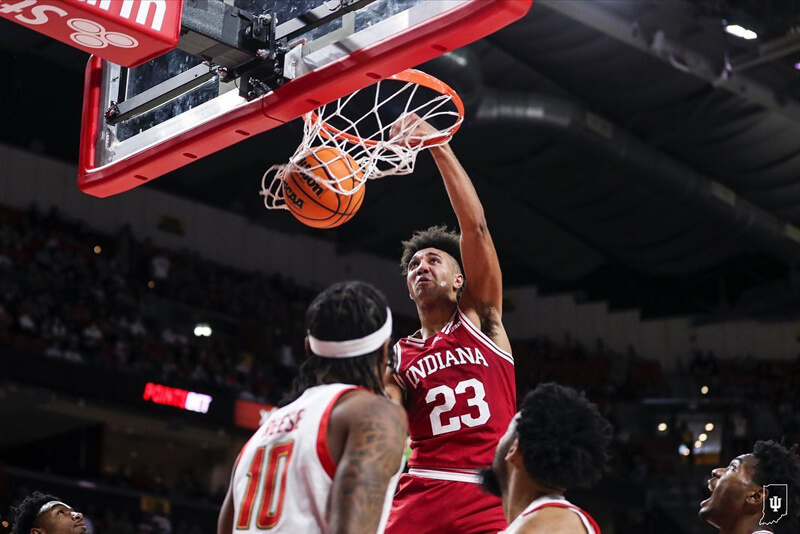 Indiana improved to 16-5 overall and 7-4 in Big Ten play with a 68-55 win against Maryland on Saturday at the Xfinity Center.

It was the second road win of the season for the Hoosiers and their first in College Park since 1934. Here are five takeaways from the win over the Terrapins.

Maryland entered Saturday’s game against Indiana coming off of a pair of wins that were fueled by strong offensive play.

But Indiana dictated Saturday’s game with one of its best defensive efforts thus far in league play. Maryland scored just 55 points, which matched its lowest point total of the season. The Terps managed just .80 points per possession, their lowest output to date in Big Ten play.

“Our defense was solid from the beginning until the end,” Mike Woodson said. “I think when you go out on the road, you’ve got to defend.”

As of late Saturday afternoon, Indiana had regained its spot as the Big Ten’s best defense. League foes are scoring only .966 points per trip against Indiana this season and conference play is over halfway complete.

Indiana’s defense has been particularly strong inside the paint. The Hoosiers rank second in the league in 2-point field goal percentage defense (44.7) and also second in block percentage (14.7).

Xavier Johnson didn’t have a great shooting game in IU’s second road win of the season, but he was effective in all other facets of the game.

Johnson dished out nine assists, which matched his season-high. Over IU’s last three games, Johnson is now averaging seven assists per game and has the fifth-best assist rate in the conference.

He was also a big reason Maryland point guard Fatts Russell never got comfortable. Russell, a 5-foot-11 transfer from Rhode Island, had averaged 19 points over the previous two games for the Terps. On Saturday, he was blanketed for much of the game by Johnson and shot only 3-of-12 from the field to finish with 12 points.

Johnson, who grew up in Woodbridge, Virginia, had close to 100 family and friends in attendance for Saturday’s game according to the television broadcast. Those family and friends watched Johnson captain Indiana to its first-ever win at the Xfinity Center and its first win in College Park since 1934.

With Rob Phinisee sidelined with plantar fasciitis, Woodson was in need of backup minutes for Johnson. Lander logged 10 minutes in the win, scoring five points and recording an assist.

“He gave us some positive minutes,” Woodson said. “I’ve got faith in everybody that wears this uniform. My whole theme has been whoever goes down, it’s next man up. And whatever minutes you give us, you better make it the most positive minutes to help us win. That’s what it’s all about.”

Lander, who said postgame that he’s been dealing with tendinitis in his knee,  made both of his field goals in the second half. His first bucket came on a drive on the left side and he also knocked in a 3-pointer from the right wing.

“My teammates keep putting confidence in me every day,” Lander said. “When it’s my time to go, I’m ready.”

Indiana dominates Maryland in the paint

The Hoosiers entered Saturday’s game with a decided advantage in the frontcourt and Maryland’s bigs had no answer for the duo of Trayce Jackson-Davis and Race Thompson.

Indiana won the points in the paint battle 36-20 and shot 50 percent on 2s compared to just 34.5 percent on 2s for the Terrapins.

Jackson-Davis and Thompson combined for 35 points and shot 14-of-24 from the field.

The Hoosiers also got a spark in the frontcourt from Jordan Geronimo, who came off the bench and scored six points to go along with eight rebounds, two blocked shots and a steal in 18 minutes.

Thompson’s work defensively on Scott was of particular note given that he scored 25 points in Maryland’s last home game, a 16-point win against Illinois. Scott managed just seven points on 1-of-7 shooting and four free throws on Saturday.

Galloway provides energy off the bench

Since returning from a wrist injury that sidelined him for 10 games, sophomore Trey Galloway has emerged as Indiana’s most consistent player off the bench.

In Indiana’s eight games since Jan. 6, Galloway has scored six or more points in seven of them. He’s averaging 6.9 points and close to two assists in over 21 minutes per game over that span. Galloway is shooting 69.2 percent on 2s (18-of-26) in conference games.

On Saturday, Galloway played a season-high 25 minutes and was 4-of-5 from the field to finish with eight points. He also had two assists, two steals and a rebound.

Turnovers have been a problem at times for Galloway, but he played a mistake-free game against the Terps.