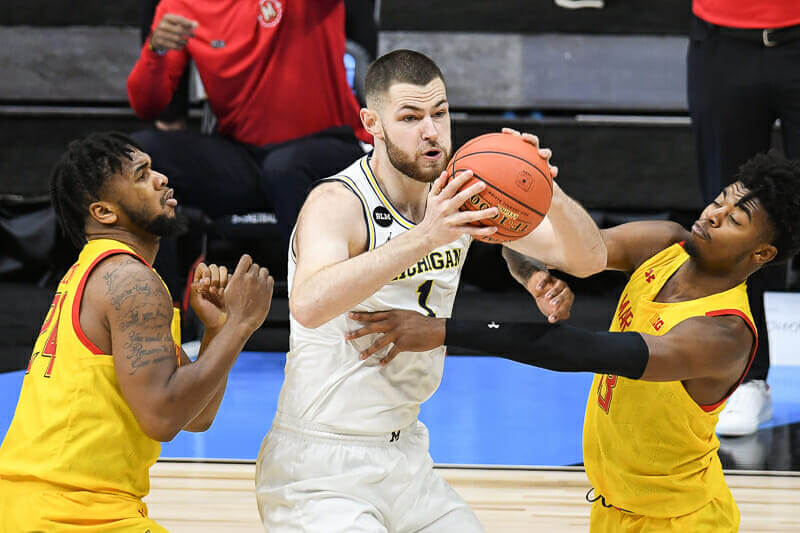 Indiana will try to avoid a letdown after an emotional 68-65 win over No. 4 Purdue when it hosts Michigan on Sunday afternoon at Assembly Hall.

The Wolverines, one of the preseason favorites in the Big Ten, are 8-7 overall and 2-3 in the Big Ten. Michigan is 1-4 in true road games.

Indiana snapped its nine-game losing streak to Purdue in a dramatic fashion on Thursday night in Bloomington.

Despite only having Trayce Jackson-Davis available for 11 minutes, the Hoosiers used stifling defense to slow down the No. 1 offense in the country in the upset win.

Now the focus shifts to Michigan, which comes into Sunday’s game desperate for a marquee win. The Wolverines have just two wins all season over teams currently ranked in the KenPom top 100 and have fallen from a preseason top 10 ranking to the bottom half of the league standings.

Michigan has dominated the series with Indiana in recent seasons. The Wolverines have won three straight over Indiana in Bloomington and eight straight overall. The average margin of victory has been 16.6 points.

Michigan’s roster underwent significant turnover in the offseason and many believed its mix of freshmen, returnees and a transfer point guard would be able to keep the program near the top of the Big Ten.

That hasn’t materialized as the losses of Franz Wagner, who has been one of the best rookies in the NBA, along with Isaiah Livers (Detroit Pistons), Chaundee Brown (G-League) and Mike Smith (G-League) have hurt Michigan on the defensive end.

The headliner on this Michigan roster is sophomore Hunter Dickinson, who struggled early in the season but has come on strong in recent weeks.

The 7-foot-1 lefty leads Michigan in scoring at 16.4 points per game and is shooting 68 percent on 2s in Big Ten play. Dickinson rates in the 86th percentile nationally as a post-up scorer, per Synergy and is shooting 80 percent at the rim, per Hoop-Math.

One interesting wrinkle with Dickinson so far this season has been his inability to get to the free throw line. In four Big Ten games, he’s attempted only seven free throws and his free throw rate (FTA/FGA) is 19.1 percent for the season compared to 42.5 percent last season. Dickinson is a capable passer out of the post (21.1 percent assist rate in Big Ten play) who can really dictate a game from the block. 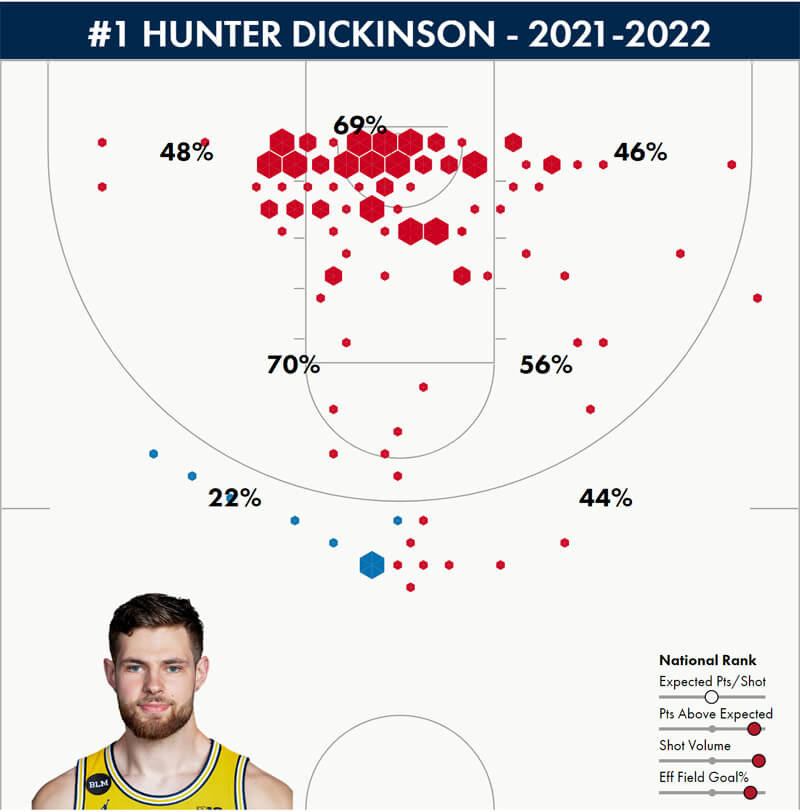 Fifth-year senior Eli Brooks is one of the most dependable guards in the league who can defend, knock down 3s and doesn’t turn it over. Brooks is making 36.8 percent of his triples this season, but hasn’t been great in Big Ten play so far at 30 percent. His 2-point field goal percentage is just 38.7 percent.

Jones went scoreless in 31 minutes in a 75-67 loss at Rutgers on Jan. 4, but has averaged 14.5 points and 2.5 assists over the team’s last two games. His 3.7 assists per game lead Michigan and he ranks in the 86th percentile nationally in ball screen possessions, per Synergy. Jones is making 45.2 percent of his 3s on the season, but just 28.6 percent in league play. 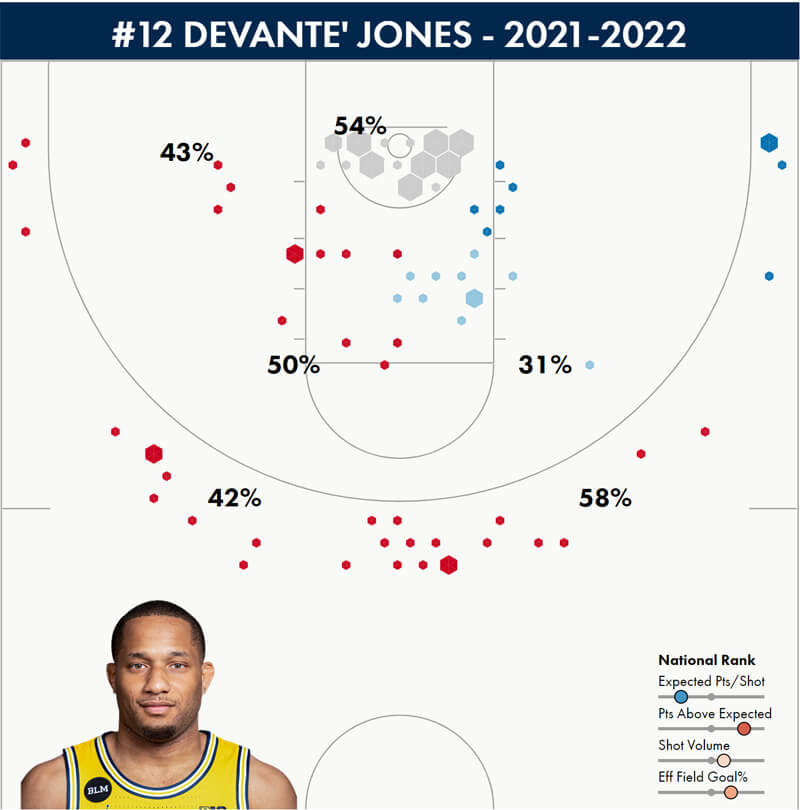 Houstan, a Canadian, was considered a lottery pick entering the season, but has struggled with the physicality of college basketball thus far. At 6-foot-8 and 205 pounds, Houston has the prototypical size for a wing in the NBA. His 3-point shot, however, has let him down through 15 games. Houstan is attempting 4.8 3-pointers per game, but is connecting at just a 31.9 percent clip.

He is coming off one of his better performances this season – 16 points on 6-of-7 shooting against Maryland – but his numbers on the road have been bad. In Michigan’s five true road games, Houstan is shooting 34 percent from the field and 20.6 percent on 3s.

Diabate is averaging 9.1 points on 58.6 percent shooting from the field and is second on the team in rebounding at 6.1 per game. Diabate has been a great finisher in Big Ten play thus far. He’s making 60.7 percent of his 2s.

Michigan’s rotation isn’t particularly deep, but the Wolverines could get a boost depth-wise if Brandon Johns Jr. is able to play on Sunday. The 6-foot-8 forward has missed the last three games as he works his way back following a bout with COVID-19. If Michigan goes small at the four, they’ll deploy 6-foot-7 sophomore Terrance Williams who averages five points in 16.6 minutes off the bench.

Michigan’s backup guards are freshmen Kobe Bufkin and Frankie Collins. Collins, a 6-foot-1 point guard, is a good athlete and defender but a poor shooter (43.6 percent). The 6-foot-4 Bufkin has scored in double figures just once this season and is just 4-of-18 on 3s (22.2 percent) this season.

(Stats are now for conference games only. Numbers are through Thursday’s games.)

Rebounding figures to loom large on Sunday afternoon as Michigan is one of the best teams in the league on the glass. The Wolverines are third in the conference in both offensive and defensive rebounding percentage. Keeping Michigan off the offensive glass and preventing second-chance points will be pivotal for Indiana.

The KenPom projection is Indiana by four with a 64 percent chance of a Hoosier victory. The Sagarin ratings like Indiana by close to four.

It bears watching how Indiana starts out following its best win of the season in front of a raucous crowd on Thursday. The Hoosiers are 12-0 at Assembly Hall, but have been prone to slow starts in the first and second half.

Indiana is going to need a much better performance from Jackson-Davis than it got on Thursday against the size and physicality of Dickinson. The Hoosiers will also need to once again do a good job of taking care of the ball after committing a season-low three turnovers against Purdue.

A win on Sunday would put Indiana at the 15-win mark, a likely spot in the Associated Press top 25 poll and halfway to a perfect home record in league play.