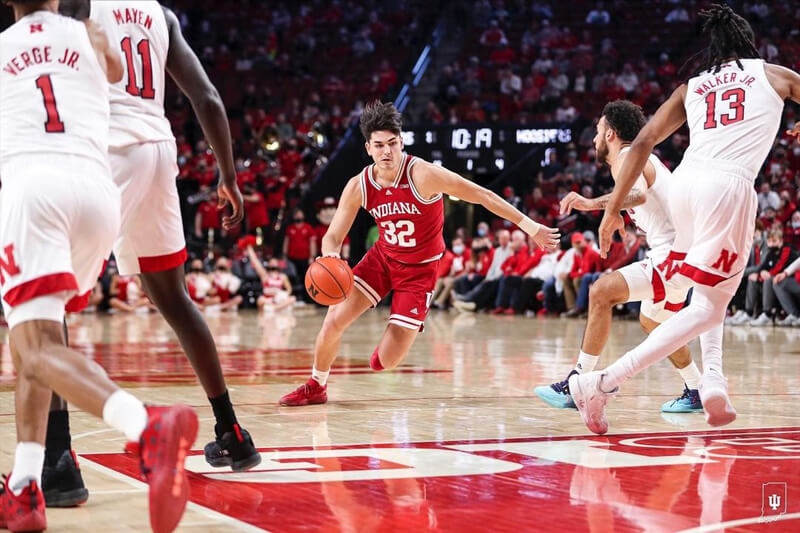 How it happened: It was a strong start offensively for Indiana on Monday night. The Hoosiers raced to an early 5-0 lead and led by as many as 10 in the opening 20 minutes. Indiana scored 1.32 points per possession on 16-of-26 shooting from the field. Jordan Geronimo came off the bench and gave the Hoosiers six points and three rebounds in eight minutes. Trayce Jackson-Davis went for 14 points and six rebounds in the first half. But Indiana’s defense wasn’t nearly as sharp as usual. Nebraska made five of its 10 3-point attempts and scored 1.14 points per possession to trail by just six at 45-39 at intermission.

Indiana stretched the lead back to 10 a couple of times in the second half and led 71-63 with 4:41 to play when Mike Woodson took a timeout. But Trey Galloway committed a turnover out of the timeout and the Cornhuskers got within six on a Bryce McGowens dunk with 4:19 to play. By the final media timeout, Indiana led 73-65 to play following a Race Thompson jump shot. Despite not having Jackson-Davis down the stretch, the Hoosiers closed out their first road win of the season and 13th victory of the season. Jackson-Davis took a fall late in the game and did not return over the game’s final 7:36.

Statistic that stands out: Indiana’s bench provided a major lift, scoring 21 points. Geronimo’s 10 points led the way, but Tamar Bates had a bucket and Trey Galloway added nine points on 3-of-3 shooting.