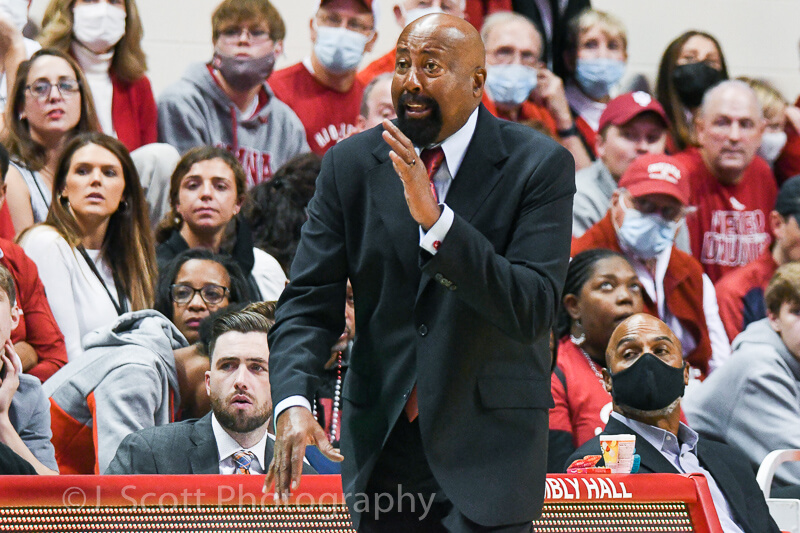 • Woodson said Indiana had some of its best preparation of the season leading into the Penn State game and said “for the most part, the defense was pretty solid.”

• Woodson on the 3-point shooting for Penn State: “You can’t hope they miss. You’ve got to make them miss.”

• Woodson said that Rob Phinisee is playing much better as of late. “He’s starting to step up and meet the challenge. Which is what we need.”

• Woodson on the struggles of Miller Kopp and Parker Stewart: “They’ve struggled. But I’ve got to help them. I just do. We were 4-of-17 on 3s last night. We’ve been shooting the 3-ball pretty well. And defending it pretty well. It kind of went the other way for us last night and we’ve just got to make sure that we don’t let that happen again.”

• On Indiana’s style of play offensively: “I like the floor to be more open. In college, you’ve got to have pick and roll play. We’ve been not very good in that area. That’s why we’ve kind of converted to posting up.”

• Woodson said that Indiana has “got to get more movement” and get guys Miller Kopp and Parker Stewart in some action off of screens.

• On Indiana’s bench play: “I’ve got to get Tamar (Bates) back up to speed. He’s had some personal issues going on. Big Mike (Durr) is still trying to find his way. Anthony (Leal) has played a little bit. (Jordan) Geronimo, I can’t be more pleased for a player. He’s been great when he’s come into the game. I’m happy in that regard. I’ve got to get a solid rotation again going.”

• Woodson said he thinks Trey Galloway will be back this week.

• On Race Thompson: “He’s been solid. He’s been like the glue to our ball club. He’s done everything we’ve asked him to do.”

• Indiana had Monday off based on “NCAA rules”, according to Woodson. He said the team will get back together on Tuesday and break down film and continue working ahead of this week’s games.

• Woodson says it’s very important to win home games because “at the end of the day, there’s no gimme’s in the Big Ten.”

• At the NBA level, Woodson said the coach he looked up to the most was Larry Brown because of the way he prepared for games. “He kind of knocked it out of the park, as far as I’m concerned.”

• On whether the transfer portal is good for college basketball: “I think the portal is going to change the game of college basketball and all sports if they’re going to allow it. You recruit someone, you’re hoping to recruit them for four years. Get an education and play in your program and you grow with those players. But the portal has changed that. I’m not looking at the portal for next year, I’ve got to deal with what is in front of me now. And hope like hell that the guys that I have on this team that are returning players are happy and willing to come back and learn and get better another year and see where we go from there. I hope they don’t have to force my hand and go in the portal because that’s not how college basketball was meant to be, I don’t think.”

• On Ohio State: “He’s built a good system. He’s got a great system in place. He’s got a veteran ball club that’s been together a few years now. They’re big inside and they’re explosive on the perimeter with guys that can really shoot the basketball. This is the first team that we’ve had that look where you’ve got to really concentrate on their low post play as well as their perimeter play. It’s going to be a challenging game for us.”