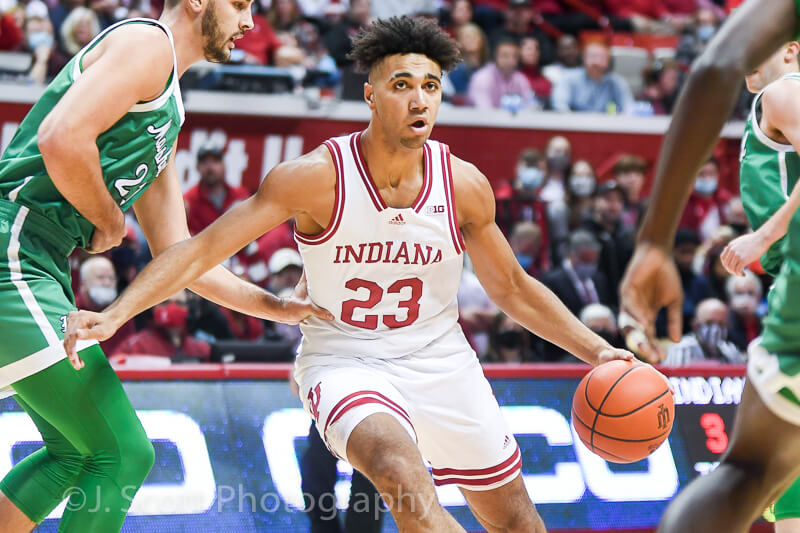 After trailing by as many as 18 points, Indiana found its way into double overtime before ultimately falling 112-110 to Syracuse on Tuesday night at the Carrier Dome. The loss, Indiana’s first of the season, dropped the Hoosiers to 6-1.

Turnovers and defensive struggles put Indiana in a hole early, but the team’s depth and improvement at the free throw line brought the game down to the wire.

Here are five takeaways from the loss to the Orange:

Turnovers are problematic once again

Mike Woodson said the first thing he told his team about playing on the road was they can’t afford to turn the ball over. In just the first minute and a half of the game, the Hoosiers turned it over three times.

From bad passes to offensive fouls, Indiana tallied 26 turnovers. And a great deal of them were unforced.

“I thought we were scared, I hate to use that word,” Woodson said. “Unforced turnovers, I mean we were just giving them the ball.”

Syracuse capitalized off of Indiana’s mistakes, scoring 33 points of its 26 turnovers.

During a two-minute span late in the second half, Syracuse turned three consecutive Indiana turnovers into eight points. It gave the Orange a nine-point lead that Indiana had to claw back from late to send it to overtime.

Not only did the Hoosiers give up 49 points in the first half, but they couldn’t find any rhythm on offense against the Orange’s zone.

On the defensive end, Indiana struggled to challenge Syracuse’s shots. The team gave up eight 3-pointers and allowed Syracuse to shoot nearly 60 percent from the field.

“They were getting good looks on offense and we didn’t have our hands up,” Trayce Jackson-Davis said.

Then on offense, the Hoosiers couldn’t figure out the zone. Indiana played stagnant on the perimeter and moved too fast through the middle of the zone.

Shooting just 3-of-12 from 3-point range in the first half didn’t help the Hoosiers spread the floor, and when they got looks inside, they made just three of their nine layup attempts.

“I thought we played so out of character in the first half,” Woodson said.

Jackson-Davis said they were doing their own thing in the first half. The difference heading into the second was that they started listening to Woodson.

The biggest adjustment was being patient in the zone, Jackson-Davis said.

With around four minutes left in the game, Jackson-Davis banged knees with Cole Swider of Syracuse. He went down in pain and had to be helped off the court by his teammates.

Then less than two minutes later, he was subbing back into the game. Postgame, Jackson-Davis said that his knee is fine and added that it just stung for two minutes. Woodson said he just needed that time to regroup.

“That’s a big sense of relief, it wasn’t anything serious,” Woodson said.

In the last two minutes of the game, Jackson-Davis added eight more points, including two dunks and a pair of clutch free throws to send the game to overtime. He added another pair of dunks and a free throw in the second overtime.

His ability to find the basket late in the game and his presence on the defensive end put Indiana back in the game.

Climbing out of an 18-point hole isn’t a one-man job. The Hoosiers were able to get back in the game and give themselves two overtimes because many players rose to the challenge.

Stepping up didn’t just entail scoring, though. The entire starting backcourt and Rob Phinisee fouled out, so it was up to Khristian Lander to run the offense late and in both overtimes. He came into the game and hit clutch free throws and found good looks to give Indiana a chance.

But Woodson is still looking for more from his bench. The starters gave them the offensive production to make it a ball game, but the bench only contributed 10 points.

“We got solid play from everybody,” Woodson said. “I’ve got to get our bench back going again because it’s going to be critical going into the Big Ten.”

Free throws appearing in five takeaways is usually indicative of a lackluster performance, but Indiana’s free throw shooting was one of its consistent highlights throughout the game.

The Hoosiers shot 74 percent from the line, knocking down 23 of its 31 attempts. But the most impressive performance from the stripe came in crunch time.

With two seconds left in regulation, Lander went to the free throw line for two shots. The Hoosiers were down by three, so he had to make the first, miss the second and then hope for an Indiana rebound.

“We haven’t practiced it,” Jackson-Davis said about missing the free throw.

But they executed perfectly. Jackson-Davis pulled down the rebound and got the foul call with less than a second left. Down two points, he sunk both of the shots to send it to overtime.

During overtime, the free throw shooting wasn’t as strong as Indiana hit just 50 percent from the stripe. But the Hoosiers repeated their poise from the line when it mattered.

Down three points with seven seconds left in double overtime, Kopp was fouled at the top of the key and had to make all three free throws to tie the game. And he did. It gave him a career-high 28 points on the night.

Ultimately, Joseph Girard III answered Kopp’s free throws to give the Orange the win, but the Hoosiers ability to knock down free throws with the game on the line showed improvement.