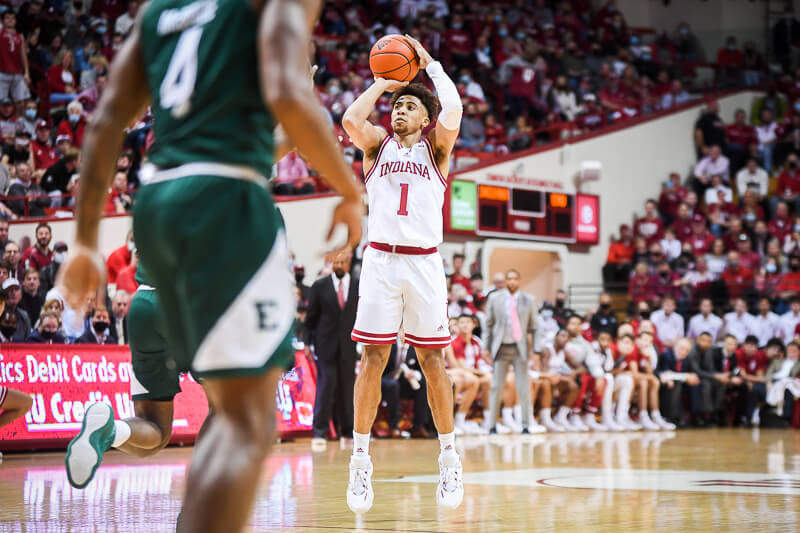 Mike Woodson opted to keep the starting lineup the same as it was in the Bahamas heading into his first game as head coach at Indiana. That meant starting Xavier Johnson as the point guard against Eastern Michigan on Tuesday.

Johnson assisted on IU’s first basket of the season — a 3-pointer from Parker Stewart in transition.

But in his efforts to facilitate at point, he racked up three turnovers in the first five minutes from bad passes and ball control. That’s when Woodson made the first substitution in his three-point guard system.

Rob Phinisee entered the game to take over at the one spot. While Johnson passed around the outside, Phinisee drove into the paint off of high ball screens and dished it back out.

He showed a similar style of play from last season. Phinisee wasn’t afraid to power through the lane and take the ball to the rim, because that’s where he was comfortable. But in his first game under Woodson, Phinisee wasn’t just looking for shots near the basket.

With nine minutes left in the first half, Phinisee dribbled up over the top of Race Thompson like he normally does. When he found open space at the elbow, he didn’t pass it away or keep driving toward the basket — he shot it. And it went in.

Not even two minutes later, Phinisee had another wide-open look. This time it was a 3-point look from the wing and he knocked down that shot, too. He went on to finish the half as the leading scorer for the Hoosiers with seven points.

But before the half came to a close, Johnson rejoined the lineup alongside Phinisee with five minutes to go. It was something Phinisee hinted at during media availability Tuesday.

He said there have been times in practice when all three point guards — Phinisee, Johnson and Khristian Lander — have been on the floor together. Woodson wants all of them to know how to play the one through three positions.

They did just that. On the first possession with the two point guards in together, Phinisee passed it to Johnson on the outside for an easy 3-pointer.

Woodson went back to the original starting lineup to begin the second half. Johnson came back into the point role with a bit more confidence orchestrating the offense, recording zero turnovers in the final 20 minutes.

There was a certain pattern to the guards and their rotations.

When Johnson was in at point by himself, Stewart was his shooting guard. Then when Phinisee subbed Johnson out, Tamar Bates came in to play the two. And finally, the two guards, Phinisee and Johnson, played together to close out.

But the second half didn’t exactly mirror the first. Why? The guards struggled to knock down shots. Indiana went from 26.7 percent from 3-point range in the first half to zero made in the second — totaling a pedestrian 4-of-24 from behind the arc.

Phinisee didn’t score in the second half after leading the Hoosiers in the first. Woodson said he wants his players to have confidence in shooting from the perimeter, but said there were a few unnecessary shots on Tuesday night

“We had good looks at it with Xavier and Rob and whoever was in that spot, and we just didn’t knock them down. But, again, we’ve got to keep shooting them because it’s a part of the game,” Woodson said.

It was clear the dual point guard lineup was effective in the first half when shots were going in, but the poor shooting and emphasis on guard play in the second half opened the door for EMU to get right back in the game.

“We’ve still got work to do. I ain’t going to lie,” Johnson said. “Our last practice on Sunday, our last scrimmage, that little set up, we shot the same percentage, 4-for-24. Coach said ‘You’ve got to get in the gym.’ And that’s what we’re going to do, keep grinding and get back in the gym tomorrow.”

Johnson and Phinisee ended up playing nearly the same amount of the time, with 25 and 26 minutes a piece, respectively. The third and final point guard in the system — Khristian Lander — didn’t see any court time.

“This is kind of a year for him where he’s in that learning mode,” Woodson said Monday of Lander. “But he’s had his moments, flashes.”