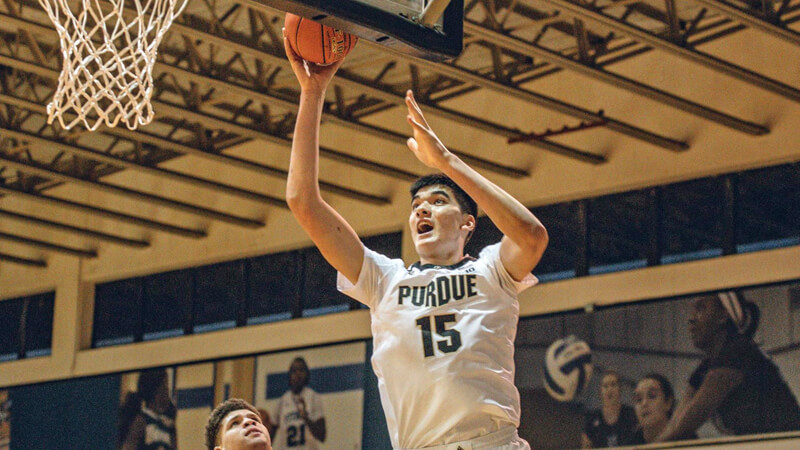 With the official start of practice just a few weeks away, UMHoops and Inside the Hall have partnered to bring you our annual preseason breakdown of the top 25 players in the Big Ten for the 2021-2022 season.

The series will be broken into five parts over the course of a week and our third installment of players 15-11 is available below:

Pete Nance’s potential has never been much of a secret. He was one of the highest-rated commitments in Northwestern history, he has NBA bloodlines, can make jump shots and is 6-foot-10 with a 7-foot wingspan.

That potential has popped at different points during Nance’s career — who could forget the three-game Big Ten winning streak over the holidays last season — but it has never come together consistently, certainly not consistently enough for Northwestern to be a winning program during his time in Evanston.

Nance enters his senior year coming off of his best season to date, where he shot 56% on twos and 34% on threes, but Chris Collins will need him to take that next step if Northwestern is going to avoid playing on Wednesday at the Big Ten Tournament once again.

Frazier arrived in Champaign back in 2017 as a John Groce recruit, but will finish his career this winter as a fifth-year senior. He’s one of several Big Ten returnees taking advantage of an extra year of eligibility due to the COVID-19 pandemic.

The 6-foot-2 guard should have plenty of opportunities for clean perimeter looks with the returns of Andre Curbelo at point guard and Kofi Cockburn at center, who will be a focal point of Big Ten defenses.

A career 36 percent 3-point shooter, Frazier is also a force defensively. He was named to the Big Ten’s All-Defensive team last season and was ninth in the conference in steal percentage. Frazier’s role offensively in his final season should expand and yield him more opportunities due to the loss of Ayo Dosunmu to the NBA.

The latest in what seems like a never-ending list of 7-footers to play for Matt Painter in West Lafayette, Edey was an under-the-radar recruit who outperformed expectations last season.

In just 14.4 minutes per game, Edey came off the Purdue bench and averaged 8.7 points, 4.4 rebounds and 1.1 blocks per game. He shot close to 60 percent from the field and was named to the Big Ten’s all-freshman season.

Edey’s size is overwhelming for Big Ten defenders in the post and in the offseason, he put himself squarely on the radar of NBA scouts on the international stage. Playing for Team Canada in the FIBA U19 World Cup in Latvia, Edey averaged 15.1 points, 14.1 rebounds and 2.3 blocks per game and led the Canadians to a bronze medal. While it’s unlikely that he’ll be a starter for the Boilermakers due to the return of Trevion Williams, Edey is the clear frontrunner for Big Ten sixth man of the year.

Baker is back for one more year at Rutgers and will look to lead the Scarlet Knights back to the NCAA Tournament.

Baker’s inefficiency, he had just a 99.8 offensive rating last season, is a product of both his style of play and Rutgers’ offensive scheme. The Scarlet Knights take a lot of tough shots and play a lot of one-on-one ball. Baker is a very capable scorer in those situations and is the most efficient off the dribble jump shooter returning in the Big Ten this season (with at least 65 attempts), per Synergy Sports. Those shots aren’t always efficient, but his ability to make more inefficient shots than the average guard made a difference for Steve Pikiell’s team.

With Jacob Young’s transfer to Oregon, Baker should also have more opportunities to prove himself as a distributor after his senior year assist rate (19.1 percent) was his lowest since his freshman season.

Five of the nine Big Ten teams that made the NCAA Tournament last year project to have a newcomer starting at point guard and Baker’s return should provide some needed continuity for the Scarlet Knights.

With limited size on the roster last season, Mark Turgeon often went the small ball route and it was Scott who often made it work.

The Philadelphia native often played the five for the Terps a season ago and was a mismatch problem because of his ability to step outside and make 3-pointers. Scott shot 44 percent on 3s for the season and 42 percent in league play, which ranked eighth in the conference. He was also 13th in the league in defensive rebounding percentage, 16th in block percentage and 17th in free throw rate.

The arrival of Georgetown transfer Qudus Wahab should allow Scott to shift to the four and take some of the pressure off to defend in the post. The Terps lost Aaron Wiggins (NBA) and Darryl Morsell (Marquette), which should create more opportunities offensively for Scott to expand upon the 11 points he averaged last season as a sophomore.