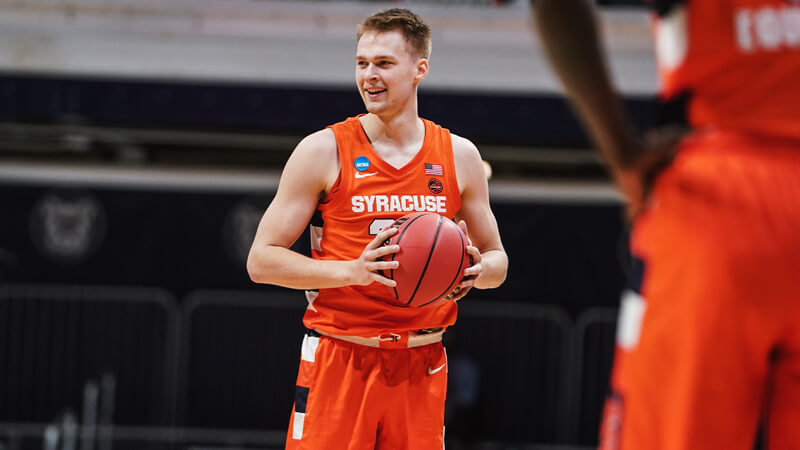 This year’s Big Ten-ACC Challenge will send Indiana on the road to the Carrier Dome to face Syracuse on Nov. 30. This matchup will mark the Hoosiers’ 21st game in the challenge where they hold an 8-12 record.

This will mark the seventh time the two schools have met. The Orange has won five of its six meetings with the Hoosiers. But the first time the two programs went head-to-head was in the 1987 NCAA Championship game, which Indiana won, 74-73.

Jim Boeheim has been the face of Syracuse basketball for 45 years now. He’s served as the head coach at his alma mater since 1976. He started as a walk-on in 1962 and finished his time as a player as the team captain.

As the longest-tenured active coach in college basketball, college football and every professional sport, Boeheim has never had a losing season. Under Boeheim, the Orange have made 34 NCAA tournament appearances, five trips to the Final Four and won the national championship in 2003.

His coaching style is marked by his famous match-up 2-3 zone defense. The zone has been so effective for the Hall of Fame coach for a myriad of reasons, but most notably because most opponents don’t play a zone, so they consequently struggle to prepare for it.

The uncommon defense is simplistic, but helps spark the Orange’s fast-break offense and allows them to control the tempo of the game. And based on Boeheim’s 45 winning seasons — it seems to work.

Last season, Syracuse posted an 18-10 overall record, but finished eighth in the ACC with a 9-7 conference record.

Their regular season performance earned the Orange an NCAA tournament bid as a No. 11 seed. Syracuse made it to the Sweet 16 — upsetting both No. 6 seed San Diego and No. 3 seed West Virginia along the way — before falling to No. 2 seed Houston.

Buddy Boeheim — the coach’s son — put the NBA on notice after his impressive March during Syracuse’s tournament run. During the month, the 6-foot-6 guard averaged 26 points per game and shot 48 percent from 3-point range.

But with still plenty to work on, Buddy is back for his senior season. And this season, a third Boeheim is joining the program, too.

Jimmy Boeheim announced in April he was transferring from Cornell to join his family’s dynasty at Syracuse as a graduate transfer. The 6-foot-8 forward last played in the 2019-20 season as the Ivy League canceled the 2020-21 season due to the COVID-19 pandemic, where he averaged 16.7 points and 5.6 rebounds while shooting 43 percent from the floor.

The program, however, will lose two of its All-Atlantic Coast Conference team members.

After his breakout sophomore season, forward Quincy Guerrier declared for the NBA draft. Averaging 14.5 points per game and leading the team with 8.4 rebounds, he was named to the All-ACC third team. Instead of staying in the draft however, Guerrier transferred to Oregon in May.

Alan Griffin earned an All-ACC honorable mention then chose to forego his last two years of eligibility for the NBA draft. The 6-foot-5 forward played for the Los Angeles Lakers in the NBA’s summer league.

The Orange finished 42nd nationally in the final KenPom ratings last season and are projected to be the nation’s 66th best team this season according to Bart Torvik’s preseason ratings.