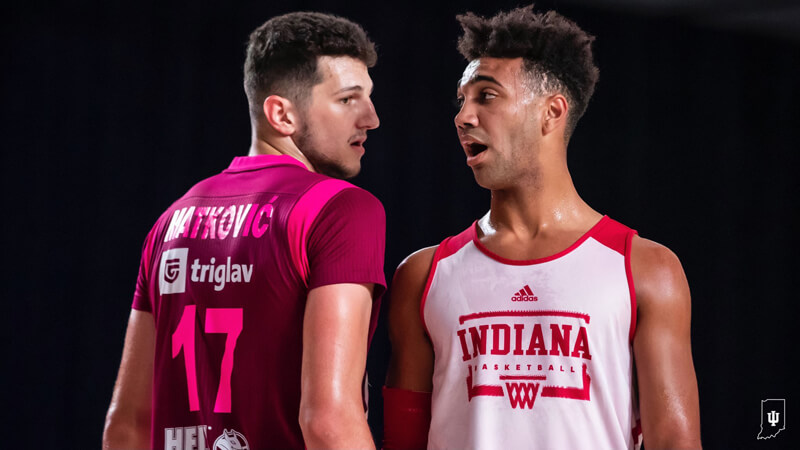 NASSAU PARADISE ISLANDS, The Bahamas – Quick thoughts on a 79-66 exhibition win over BC Mega:

How it happened: A strong offensive performance in the opening 20 minutes set the tone for Indiana’s exhibition opener against BC Mega in the Imperial Ballroom at the Atlantis Resort. The Hoosiers, led by 11 first-half points from Trayce Jackson-Davis and strong perimeter shooting, scored 1.16 points per possession to claim a 41-32 halftime lead over the Serbian professional club. Tamar Bates was stellar in his first performance in an IU uniform, adding 11 first-half points for the Hoosiers, who were 4-of-9 from behind the 3-point line in the first half and made 7-of-10 free throws. BC Mega, meanwhile, struggled with turnovers, committing 11 in the first half.

BC Mega got within five at 45-40 early in the second half on a Malcolm Cazalon bucket with 17:49 remaining, but Indiana quickly stretched the lead back to 10 on a pair of free throws by Race Thompson and 3-pointer by Parker Stewart. By the 13:32 mark of the second half, the Hoosiers led by 13 on 3-pointer by Miller Kopp, his second of the game. Kopp nailed another 3-pointer at the 9:33 mark to put the Hoosiers ahead 66-53. The lead stretched to 15 points on a Jackson-Davis dunk with 8:01 to play and BC Mega would get no closer than 11 points the rest of the way.

Standout performers: Jackson-Davis turned in a solid performance, finishing with 21 points on 9-of-15 shooting to go along with eight rebounds. Kopp, who made three of his four 3-point attempts, added 14 points and Bates also had 14 points.

Statistics that stands out: Indiana had 29 bench points and scored 33 points off of 24 turnovers by BC Mega. 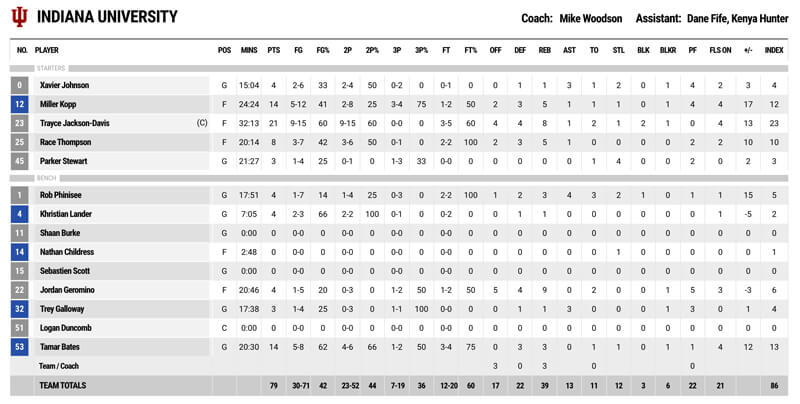