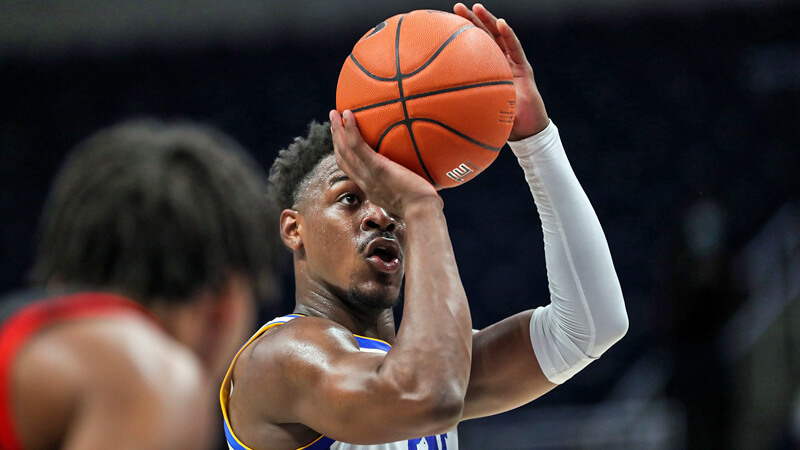 NASSAU PARADISE ISLAND, The Bahamas – In one of their first conversations after arriving on campus this summer, assistant coach Dane Fife told Xavier Johnson why he wasn’t unlocking his full potential on the court.

Johnson’s skill has never been in question. At Pittsburgh, he was named to the ACC’s all-freshman team. He became the first player in program history to surpass 750 points and 300 assists while still a sophomore. In total, he averaged 13.7 points, 4.9 assists and 3.7 rebounds per game throughout his three seasons with the Panthers.

It wasn’t physical ability that Fife wanted to talk about, but it was the mental side of the game.

At Pitt last season, Johnson had the tendency to let surrounding factors – like referees and opposing benches – get into his head. It led to things like slapping the ball away after the whistle and staring down the other team’s bench after making a 3-pointer. During a five-game stretch, he was called for three technical fouls.

Maybe the frustration was a result of all of the losing. Pitt won just 15 conference games in his three seasons. Maybe it was a result of Johnson’s competitiveness, describing himself as having “a big heart that cares about the game.” In reality, it was probably a combination of both.

From a broad perspective, Fife and Johnson are an intriguing duo to talk about mentality. In his playing days at IU, Fife talked smack. He got into his opponent’s heads. He’d probably be the exact type of player to get under Johnson’s skin. It’s also likely why Fife’s mentorship has been so beneficial.

On Thursday afternoon, sitting in the Bahamas media room at the Imperial Ballroom with his arms wrapped over his knees, Johnson sounded like someone with perspective. When asked about what he would tell his freshman self, it’s apparent that Fife’s message has not only been received but welcomed.

“Honestly, just to just keep my head on and not let the refs take me out of the game,” Johnson said Wednesday. “Because that’s one thing I had in the past and what I want to take away while I’m here.”

How exactly has Johnson been working on that?

“In practice, I get no foul calls,” Johnson said with a smile. “That’s a start.”

He’s trying to stay calm if he makes a bad pass or misses a shot. Instead of letting his frustration boil over, he’s focusing on helping his teammates.

In April, Johnson decided to transfer to Indiana, a move that he said has been smooth. Despite being part of five new players to IU this offseason, Johnson was quickly struck by the chemistry of the team, part of a burgeoning culture that has become evident in the program since Mike Woodson arrived. It also shows in off-court rapport like on a recent bowling trip, when there was a lighthearted dispute about who won between frontcourt mates Trayce Jackson-Davis and Race Thompson.

“They were arguing about it for an hour,” Johnson said.

Johnson figures to play an important role for Indiana this season. His skills as an elusive playmaker and facilitator are something that Indiana has lacked the past few seasons. From Johnson’s perspective, there’s another specific reason that Woodson recruited him to IU.

“He brought me here to lead these guys,” Johnson said.

The fact remains that Johnson has played in 84 games, including 66 starts in the ACC, where he’s picked up a thing or two along the way. And Johnson wants to use that knowledge. He’s been a vocal leader, helping keep the energy in practice up.

Part of that has role has been taking sophomore point guard Khristian Lander under his wing, calling him “a little brother.” Johnson studied film of all of his teammates to get to know their game, but he said he watched Lander’s tape more than anyone else. During practices, Johnson corrects Lander if he makes a mistake. He encourages him when he makes a good play.

He’s trying to do the same with freshman Tamar Bates. Among other relationships, Johnson said he’s built a strong friendship with Rob Phinisee. Johnson, Lander and Phinisee figure to be in a competitive battle for playing time at point guard, but how Johnson interacts with his teammates, constantly trying to make them better, is based on a singular goal and something he wasn’t able to do at Pitt: win.