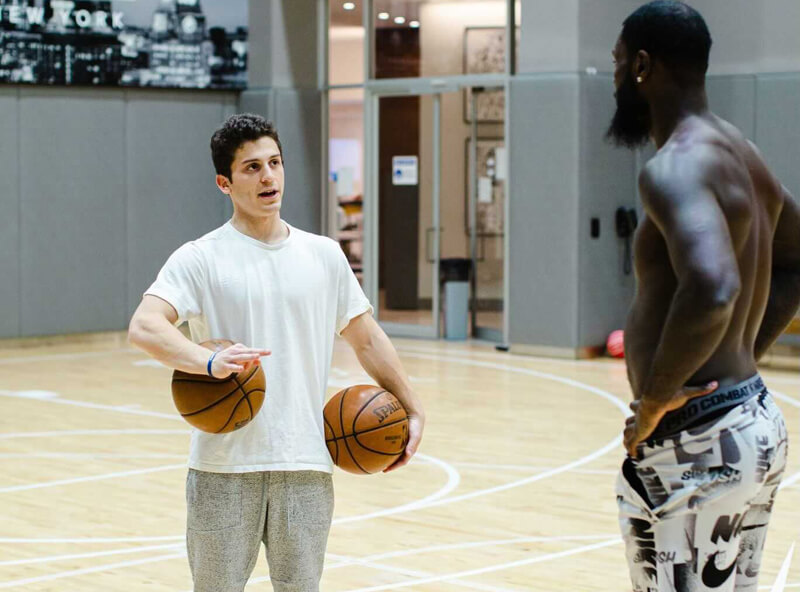 Isaac Green (pictured) is in his first year as a graduate manager for the Hoosiers. A native of Franklin Lakes, New Jersey, he was a member of the PSA Cardinals Nike EYBL 17U coaching staff for 5 seasons under program director Terrance “Munch” Williams. Green held different roles including offensive coordinator and an opportunity to become the youngest Head Coach in Nike EYBL history at age 17. He assisted in the development of 60 Division I College Basketball players, 5 First Round NBA Draft Selections (Ty Jerome, Omari Spellman, Mohamed Bamba, Cole Anthony, and James Bouknight) while taking five trips to Peach Jam.

He earned a Bachelor of Science in Business Administration from Indiana University’s Kelley School of Business in 2021.

Nick Russell starts his first year as a graduate manager for the IU program. The former Kansas State and SMU player joins the staff after enjoying a professional career overseas since 2014. A native Texan, he graduated from Grace Preparatory Academy in Arlington and was one of the top point guards in the Class of 2009.

He began his career at Kansas State where he played two seasons. At SMU, he averaged 11.8 points, 3.5 rebounds and 3.7 assists in 69 games for Coach Larry Brown’s Mustangs.

As a junior, he averaged 14.0 points, 3.6 rebounds and 4.3 assists. He earned AAC All-Academic honors as a senior and graduated from SMU with a degree in Psychology in 2013 before venturing overseas to play professionally.

In Europe, he made stops in Cyprus, Germany, Greece, Romania and Sweden; winning the Cypriot Cup championship in Cyprus earning All-Cyprus honors in 2015. He averaged 12.3 points, 4.4 rebounds, 2.5 rebounds and 1.7 steals per game that season. He also was second team All-Sweden and second in the league in scoring in 2020 after contributing 19 points, 4.0 rebounds, 5.0 assists and 2.0 steals.

Jacob Herrs begins his first campaign as a graduate manager at IU. He joins the Hoosiers after playing four years at Wichita State. The Kansas native graduated from WSU this past spring with a degree in General Business.

He played in 20 career games and the Shockers went 19-1 in those contests. He was named twice to the AAC All-Academic team and helped his squad to an AAC regular season championship in 2021, two NCAA Tournament berths and an NIT Semifinal berth in which the Shockers won at Assembly Hall to earn a trip to Madison Square Garden.

He was as two-time All-League selection at Andover High School and was a two-time regional high jump champion who finished second at the state meet as a senior in 2017. He also played basketball in the summer for Next Level Elite.