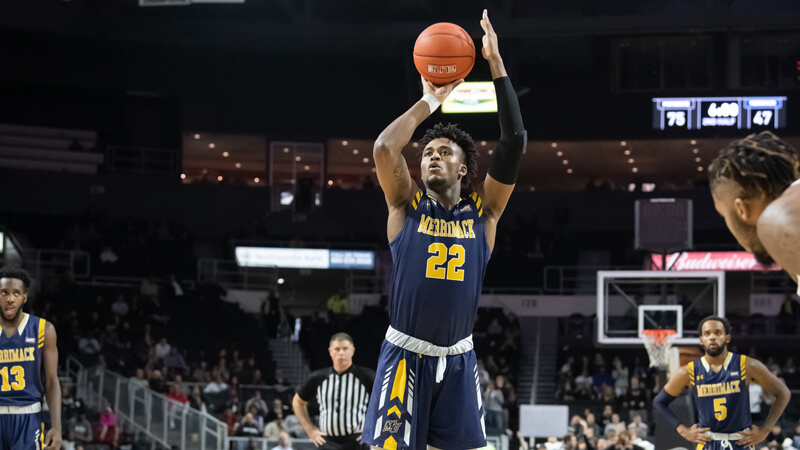 To-date, eight of Indiana’s 11 non-conference opponents for the 2021-22 season have been revealed and Inside the Hall is taking a closer look at each of those opponents as the offseason rolls along.

Up first, the Merrimack Warriors.

Indiana will host the Merrimack Warriors during its nonconference slate, per Jon Rothstein, with a date and time yet to be announced. The private college is located outside of Boston, Massachusetts, and has a student body size of just more than 4,000.

Merrimack is a part of the Northeast Conference and is in the middle of a four-year transition to Division I. The school won’t be full members until the 2023-24 season, and therefore is not eligible for the NCAA tournament until then.

This game will mark the first-ever matchup between the Hoosiers and the Warriors.

Joe Gallo will enter his sixth season as head coach for his alma mater this fall with a 90-54 all-time record at Merrimack. He led the program to three straight NCAA tournaments to finish out its Division II run and snapped a 19-year conference championship drought in 2019.

The Warriors are coming off an extremely average season, finishing right at .500 with a 9-9 record. The team also only faced conference opponents during the 2020-21 season due to the COVID-19 pandemic and finished in fifth in the NEC. Merrimack finished last season ranked No. 287 in the final KenPom ratings.

But in the five seasons before, Gallo’s squad won at least 19 games every year — capped by a 20-win season in 2019-20 before the COVID-19 pandemic cut the season short. In fact, the Warriors set an NCAA record for wins by a program in its first year of reclassification to Division I. During that season, Merrimack recorded its first Division I win on the road at Northwestern on Nov. 8, 2019.

The Warriors are a defensive-minded team who led the NEC in scoring defense, 3-point field goal percentage defense, steals per game and turnover margin during the 2019-20 season.

Merrimack’s leading scorer and rebounder, Jordan Minor, will return for his junior season this fall. The 6-foot 8-inch forward averaged 12 points and eight rebounds per game.

He stepped into a starter role after serving as a reserve during his freshman campaign. During his sophomore season, he ranked among the top five in the NEC in rebounds per game, blocks per game and offensive rebounds per game as well as led the Warriors in double-doubles.

Also returning is Merrimack’s starting point guard Mikey Watkins. The incoming senior’s scrappy style of play led him to 34 steals on the season and he scored in double figures in all but four games.

Both Minor and Watkins landed on the NEC All-Conference third team following the 2020-21 season. In Bart Torvik’s preseason ratings for the 2021-22 season, Merrimack is ranked 178th in the country.