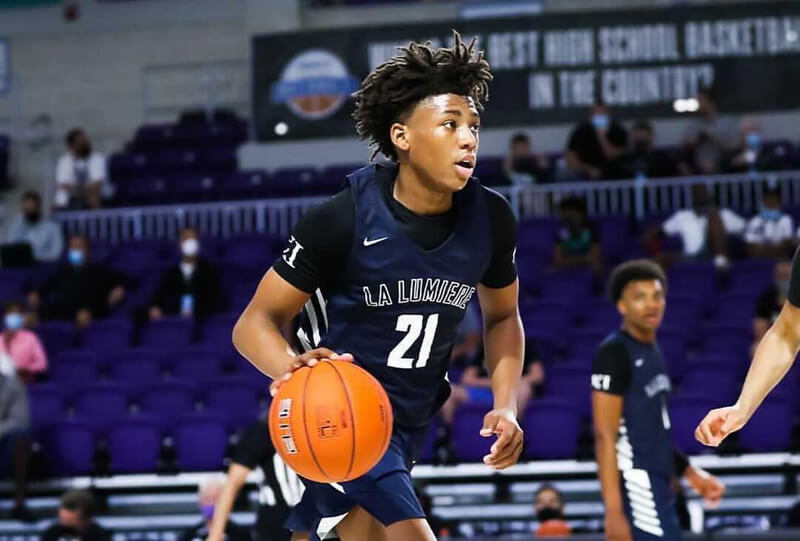 Fears, who began his high school career at Joliet West, has a growing list of scholarship offers. Prior to his visit to Bloomington, Fears took visits this month to Illinois and Missouri. Fears transferred to La Lumiere prior to last season from Joliet West to be able to play a full season due to COVID-19 restrictions in Illinois.

Earlier this week, Inside the Hall spoke at length with his father, Jeremy Fears Sr., about the Indiana visit and much more.

Editor’s note: Some of the questions have been edited for brevity and clarity.

How was the Indiana visit?

Fears Sr.: The Indiana visit was great. We really enjoyed it. It was actually better than we anticipated. We had no idea what to expect and had no real expectations or anything crazy. But walked out of there really, really impressed.

How many other visits have you taken so far this month?

Fears Sr.: We went to Illinois on June 1, the very first day (visits were allowed). Then we went to Mizzou. We were supposed to go to Auburn, but didn’t end up making the Auburn one and then Indiana was next. Then we go to Michigan State next week.

Given that you went through the recruiting process yourself, what’s it been like having that perspective and being able to help your son go through the process?

Fears Sr.: For me, honestly, it’s everything. What’s funny about that is 40 or 50 percent of the coaches that are recruiting my son, recruited me. (Fears Sr. played at Ohio University.) Guys like Cuonzo Martin, Matt Painter, Chris Lowry over at K-State. Bruce Weber. Bill Self, when he was at Illinois. Shaka Smart from back in the days he was in the MAC. I’m not far removed at all (from the process). So I know exactly what I’m looking for.

Mike Woodson’s background is in the NBA and there was some skepticism from some about his lack of experience in college, so what were your impressions of him coming to Indiana and what did you learn from talking to him on the visit?

Fears Sr.: To be honest, I was probably kind of skeptical, too. He didn’t have any real college experience. So dealing with the youth and recruiting and how all of that would work out when you’re using to coaching in the NBA and working with pros and millionaire guys and egos and things like that, but coach (Woodson) was so impressive because he was so humble, he was down to Earth.

He never talked about himself much or even his accomplishments. The relationship and the conversations seem genuine. Super impressive. My wife raved about him the entire way home, all night, and the next day to family and friends and me. Coach seemed to be a great guy. The way he was talking to us, he took time out of what he was doing. We were sitting on the side near Tamar Bates’ dad and as he’s coaching and teaching, he would come over and talk to us. Just having daily and life type of conversations, it wasn’t all basketball. It was impressive.

What do you like about the rest of the coaching staff?

Fears Sr.: I really liked Yasir Rosemond. I’ve been talking to (Dane) Fife for a while. Fife is a great guy. And Kenya Hunter, I thought the entire staff was terrific.

What did you think of the facilities and Evolve (where the players live)?

Fears Sr.: That was icing on the cake. That place was unreal. The living conditions for those kids. It was like a six-star hotel for the kids. I thought that was real nice. I’m being funny when I say six-star, but it’s a real nice atmosphere.

I really liked the football stadium. Of course Assembly Hall is just different and I’m looking forward to it because Jeremy has never been to a tailgate, he’s never been to a football game and he’s only been to one nice college basketball game and that was a couple of years ago right before COVID when Purdue played against Michigan and Mackey was rocking.

Will you try to get back to Indiana this fall for a football game?

Fears Sr.: Without a doubt. They’re supposed to be pretty good.

What can you tell us about Jeremy as a player?

Fears Sr.: The strength of his game is that he’s a natural-born winner and leader. He does not believe in losing. He will go play by play the entire game. He’s just so vocal. It’s contagious. He can change a culture.

So I’ll give you a quick example. Joliet West had won four games previously. Jeremy was 13 years old and had just graduated eighth grade. The next season, the same roster, Jeremy came in as a 14-year old freshman and with his mindset, his mentality and toughness …he’s like a Collin Sexton or a Patrick Beverly. That’s his mentality. It became contagious and he kind of changed the culture with his work ethic.

Just his leadership is next level when it comes to wins and losses and making guys better around him. His intangibles as a point guard and passing ability. He’s electric with the ball. His understanding and IQ have always been high. His nickname is “Coach J” because of his IQ. He’s a coach on the floor.