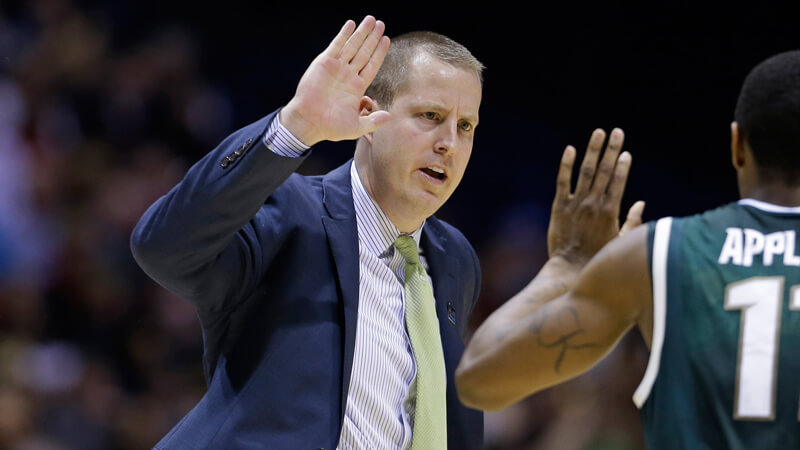 Indiana University men’s basketball coach Mike Woodson has announced that former Hoosier player and assistant coach Dane Fife will return to his alma mater and rejoin the IU staff. The Clarkston, Michigan native is back after spending the last 10 seasons on Tom Izzo’s staff at Michigan State, the last three as Associate Head Coach.

“Dane is someone who I have always had the utmost respect for,” said Woodson. “His knowledge of the Big Ten and his success as a recruiter will be an invaluable asset as we look to continue building a staff that will help elevate this program to the highest levels. I know his love for the Hoosiers and this University comes across the moment you talk to him and we are excited to welcome back Dane, his wife Blair, and daughters Quinnly and Reagan back to Bloomington.”

A 2002 graduate of IU, Fife led the Hoosiers to the national title game and a share of the regular-season Big Ten Championship. Individually, he was named co-Big Ten Defensive Player of the Year as a senior. He is the Indiana career leader with 180 steals over the course of his four-year career (1998-2002), while the 53 he recorded as a senior rank tied for the eighth-best single-season mark at IU. With 99 career 3-pointers, he ranks among the top 20 in school history, while his .478 3-point field-goal percentage in 2001-02 ranks sixth on IU’s single-season chart. The 37 games he started as a senior established the Indiana single-season mark, while the 131 games in which he played over the course of his career rank tied for sixth all-time at IU.

He spent two seasons as an administrative assistant on the staff of then Hoosier Coach Mike Davis after graduation.

In 10 seasons with the Spartans, he was part of a staff which produced 9 NCAA Tournament berths, 4 Big Ten titles, 1 Final Four appearance , 8 All-Americans, 10 NBA Draft picks, and 3 Big Ten Players of the Year.

Under Fife’s guidance, Miles Bridges and Cassius Winston earned consensus Second Team All-American honors in three-straight years, Bridges in 2018 and Winston in 2019 and 2020. From 2016-18, Fife worked closely with Bridges, who was selected by the Los Angeles Clippers in the lottery of the 2018 NBA Draft. Winston was named the Big Ten Player of the Year and set a Big Ten record, and an MSU single-season mark, with 291 assists in 2019 as a junior and, as a senior in 2020, became the all-time leader in assists in the conference and school, breaking a 20-year record held by Mateen Cleaves. He was selected in the second round fo the 2020 NBA Draft. The Spartans led the country in total assists in 2018-19 with 715, finished third in assists per game in 2019-20 (18.3) and ranked No. 11 in assist/turnover ratio (1.45). The team’s 715 assists were the second-most in a single season in program history, the second-straight year the Spartans were among the top three in the record book. Fife has also been instrumental in MSU’s scouting and recruiting efforts. He was among the chief recruiters in several top-10 recruiting classes, including the 2016 class that included Bridges and the 2018 class that included Jaren Jackson Jr. In May 2020, The Stadium listed Fife as one of the top assistant coaches in the Big Ten.

In 2015-16, Fife helped guide Denzel Valentine to National Player of the Year honors, while Bryn Forbes earned Second-Team All-Big Ten honors. Valentine was selected by the Chicago Bulls in the lottery of the 2016 NBA Draft, while Forbes signed a free-agent contract with the San Antonio Spurs. On the court, MSU led the nation in assists per game (20.5), while setting school single-season records for assists (719) and made 3-pointers (321).

Fife also brings the defensive intensity he possessed as a player to his role as a coach, as the Spartans have held opponents below a .400 field-goal percentage in six of the last seven years, including leading the country in field goal percentage defense in 2017-18 (.367), while ranking second nationally in 2015-16 (.382) and 2011-12 (.379). He is also instrumental in MSU’s scouting and recruiting efforts. A May 2014 article by Jeff Goodman and Jay Bilas at ESPN.com listed Fife among the top head coaching candidates in the nation.

Prior to his arrival in East Lansing, he spent six seasons as head coach at IPFW, beginning in 2005-06. At the time he was the youngest head coach in Division I basketball, a distinction he held for five seasons. In each of his six seasons, IPFW tied or broke its record for wins at the Division I level, as Fife guided the Mastodons from independent status to membership in the Summit League. He posted an 82-97 record, including a 34-27 mark over the last two seasons, and a four-year mark of 37-35 in conference. In his final season of 2010-11, IPFW finished with an 18-12 record. Fife mentored three all-conference performers, including Jaraun Burrows (2008, Second Team), Deilvez Yearby (2010, Second Team) and Ben Botts (2011, Second Team). Fife was the Gary Steelheads’ first round pick in the 2002 CBA Draft and started five of the 34 games in which he played, averaging 3.4 points.

A 1998 graduate of Clarkston (Mich.) High School, Fife was the recipient of the Hal Schram Mr. Basketball Award in 1998. He was also a McDonald’s and Parade All-America selection, while playing for his father Dan.

He owns two degrees from Indiana, earning a bachelor’s degree in recreation (2002) and a master’s degree in athletic administration (2005). His family includes his wife, Blair, and daughters Quinnly and Reagan.

Back home again in Indiana. pic.twitter.com/19wzWF2kzp