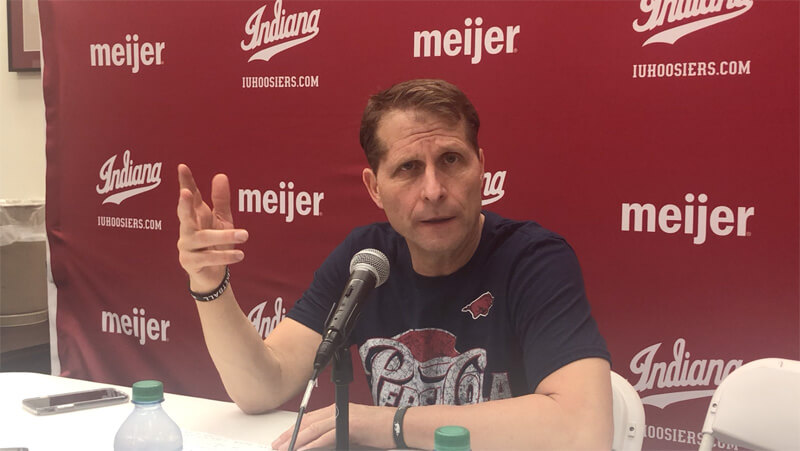 Inside the Hall will profile many of the candidates being discussed for the job over the coming days. Our fourth profile takes a look at Eric Musselman.

An intriguing candidate in the pool of possible hires as Indiana’s next head coach is Eric Musselman.

Musselman, currently the head coach of Arkansas, guided the Razorbacks to a No. 3 seed in the NCAA tournament this week, capping off an impressive 22-6 record this season. The job at Arkansas has been just one of the many stops that the 56-year-old Musselman has made throughout his winding career.

After playing collegiately at the University of San Diego, Musselman became the general manager of the CBA’s Rapid City Thrillers in 1988. It was there that Musselman hired future NBA coach Flip Saunders.

A year later, at 23-years-old, Musselman took over as the head coach of the Thrillers. He eventually registered the second-highest winning percentage in the league’s history at .688 (270-122), behind only George Karl.

From there Musselman worked his way up as an assistant coach for the Orlando Magic under Doc Rivers from 1998-2000. Then he served as an assistant for the Atlanta Hawks under Lon Kruger from 2000-02.

In 2002, Musselman earned his first opportunity as a head coach in the NBA, taking the reins of the Golden State Warriors. In his first season, he finished runner-up in the NBA coach of the year voting, losing out to Gregg Popovich. The following season, the team struggled and Musselman was relieved of the position after just two years.

After a two-year stint as an assistant for the Memphis Grizzlies, Musselman was hired by the Sacramento Kings as the head coach in 2006. But just a couple of months after being hired, he was cited for a DUI in Sacramento. The Kings finished 16 games under .500 and Musselman was let go again, as he never really worked out as a head coach in the NBA.

A couple of years later, in the span of 2010-12, Musselman served as the head coach of the NBA D-League’s Reno Bighorns as well as the Los Angeles D-Fenders. In the 2011-12 season, Musselman was named the D-League coach of the year.

After that, for the first time in his career, he dipped into the collegiate coaching ranks as an assistant and associate head coach at Arizona State under Herb Sendek. In 2014, he moved to Baton Rouge where he was an assistant for LSU.

Then in 2015, Musselman took his first collegiate head coaching job at the University of Nevada, Reno where he led the Wolf Pack from 2015-19. Musselman quickly created a winning culture, turning nine victories the year before he arrived into 24 in his first season.

In his third season at the helm, Nevada broke into the top-25, recorded a 29-8 overall mark and accumulated a program record for total wins in a season. Musselman was named as the 2017-18 Mountain West coach of the year and the Wolf Pack advanced all the way to the Sweet Sixteen.

The Wolf Pack made the NCAA Tournament again in the 2018-19 season but lost in the opening round. As a result of the success, they broke the all-time attendance record at the Lawlor Events Center and average home game attendance that season. Musselman also received a vote for AP coach of the year.

Finally, Musselman found his way to Arkansas where he’s in his second year as head coach. He’s 42-18 in two years and the Razorbacks have been in the top-25 for the back half of this season.

There’s no question that Musselman has the experience to coach at the highest level. He has plenty of connections to the NBA  after so many years in the business. His father Bill also coached in the NBA and in the Big Ten at Minnesota. Musselman’s business-like approach from coaching professionally has remained even at the collegiate level.

“From a preparation standpoint it’s really about your players and how much they can retain,” Musselman said. “As a staff, every team you coach is different. But I do think because we prepare for teams a lot differently than most teams … I mean, I haven’t changed our preparation with a college team one iota from how I prepared an NBA team.

“And NBA players are really smart. So I think we set the bar really, really high from the first game of the season with our preparation and they know they have to digest a lot of stuff. They get quizzed a lot. I’ll text guys individually about matchups. So whatever your team is used to. Our team is used to the fact that they’re going to get asked a lot of questions. They’re going to be put on the spot in front of their peers.”

Musselman is still fairly young and should have a long career ahead of him. As for recruiting, entering this season, Musselman brought in the No. 3 ranked transfer recruiting class, which included former IU forward Justin Smith.

However, Musselman doesn’t have the obvious ties to Indiana as other potential candidates like Brad Stevens or Scott Drew. The most notable link to IU is when the Razorbacks beat the Hoosiers in Assembly Hall during the 2019-20 season.

Musselman isn’t as big of a name as some other candidates but his experience, along with his proven coaching ability in his last two tenures, makes him a promising option to lead Indiana in the future.