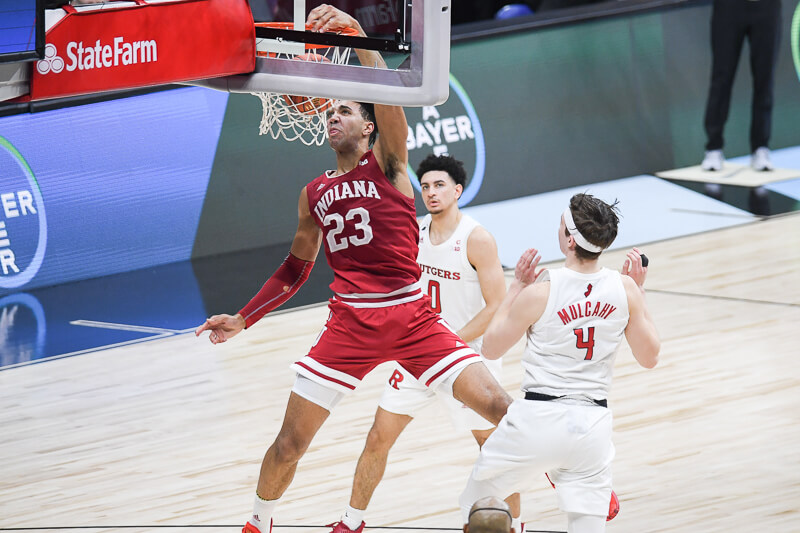 How it happened: Indiana came out with a sense of urgency in its Big Ten tournament opener. The Hoosiers raced to a 21-11 first half lead on the strength of solid 2-point shooting and stellar defense. The Hoosiers were buckling down defensively, moving the ball well and generating favorable looks at the rim for Trayce Jackson-Davis. It was as good of a stretch of basketball Indiana has played in weeks. But as has been the case all season, Indiana couldn’t maintain control nor keep its momentum. Over the final 8:53 of the first half, Rutgers, an NCAA tournament team, ripped off 22 points to claim a 33-32 halftime advantage.

The second half brought more drama and the runs you expect to see in tournament play. After Rutgers opened a five-point cushion at 41-36, Indiana ripped off an 8-0 run to grab a 44-41 lead, which forced a Rutgers timeout. The Scarlet Knights responded with four straight points to grab the lead back at 45-41 with 10:47 to play. A flurry of lead changes took the game into the under eight media timeout with Rutgers leading 49-48.

The turning point came in the next sequence as Indiana had a lengthy scoring drought and Rutgers hit a pair of 3-pointers to take a 55-48 lead with 5:30 to play. By the time Indiana scored again, Al Durham Jr. hit two free throws with 3:14 to play to make it 55-50 Rutgers. The free throws ended a scoring drought of 7:15. The Hoosiers never got closer than five the rest of the way in dropping their sixth straight game to end the season.

Statistic that stands out: With Thursday’s season-ending loss, Indiana became the first team to lose to Rutgers three times in a season since the Scarlet Knights joined the Big Ten in the 2014-15 season.