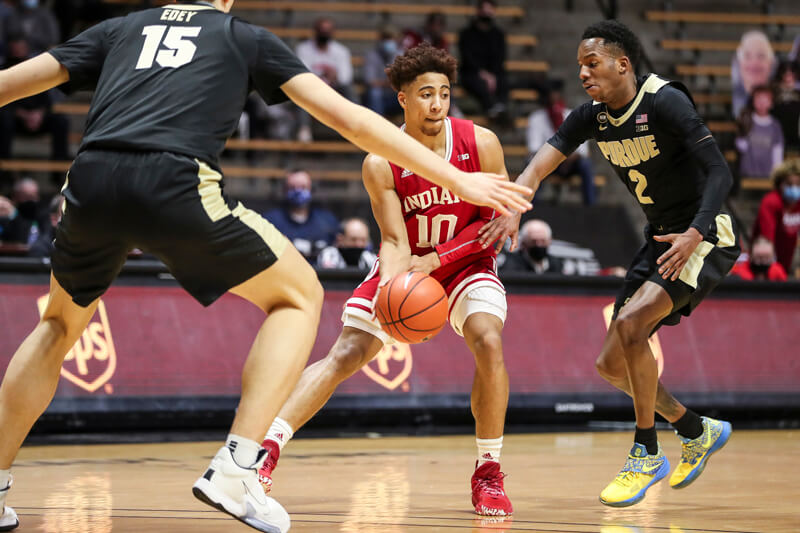 How it happened: Saturday’s game in West Lafayette went just as many expected it would. Indiana, which entered the game on a four-game losing streak, continued its late-season malaise. And Purdue, while not playing nearly as well as it has in recent weeks, easily dispatched the Hoosiers. Indiana led 7-0 early, but once Purdue claimed the lead at 11-9 on a Zach Edey dunk, the Hoosiers never led the rest of the way. By halftime Purdue’s cushion was comfortable at 29-20. Indiana scored just .67 points per possession in the first half. Despite Purdue turning it over on 28 percent of its possessions, Indiana had just six points off of turnovers in the first half.

Indiana got within four in the second half at 35-31 on a Trey Galloway 3-pointer, but it didn’t take Purdue long to regain control. The Hoosiers had a chance to cut it to two (or one with a 3), but a wild layup attempt from Al Durham missed badly at the 13:20 mark. Purdue answered with a 3-pointer by Brandon Newman to stretch the lead back to seven. Indiana never got closer than five the rest of the way. The loss, Indiana’s fifth straight, ends the regular season for the Hoosiers. Indiana is 12-14 overall, 7-12 in Big Ten play and has now lost nine straight overall to Purdue. Archie Miller, in his fourth season in Bloomington, is 0-7 against the program’s archrival.

Statistic that stands out: Indiana’s porous 3-point shooting from its previous two games continued on Saturday at Mackey Arena. The Hoosiers shot 5-of-23 (21.7 percent) in Saturday’s loss and are now 11-of-58 over the last three games from distance (18.9 percent).