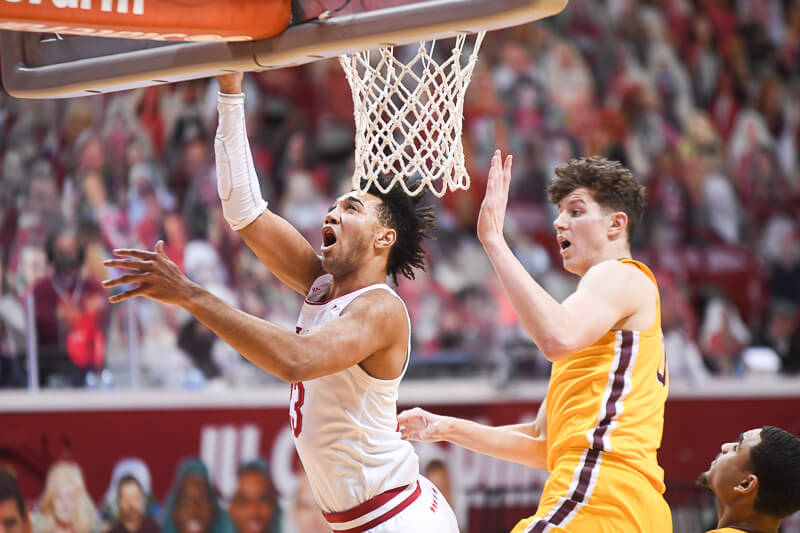 The Naismith Memorial Basketball Hall of Fame announced the five finalists for the 2021 Karl Malone Award, which honors the nation’s top forward, on Thursday.

Who is the PF of the year? ? pic.twitter.com/An0YdpYJhe

Here’s the full release issued by the Naismith Memorial Basketball Hall of Fame:

Springfield, Mass. (Feb. 25, 2021) — The Naismith Memorial Basketball Hall of Fame announced today the five finalists for the 2021 Karl Malone Power Forward of the Year Award. Named after Class of 2010 Hall of Famer and two-time NBA Most Valuable Player Karl Malone, the annual honor in its seventh year recognizes the top power forwards in Division I men’s college basketball.

“We’re excited to recognize these five tremendous power forwards as the best in the collegiate game today,” said John L. Doleva, President and CEO of the Basketball Hall of Fame. “Nonetheless, only one can take home the award come April and we’re grateful to have Karl Malone spearheading a committee that will take great care when evaluating these players in the games that matter most.”

A national committee of top college basketball personnel determined the watch list of 20 student-athletes in November, which was narrowed to 10 candidates in January and now just five finalists. This month, the finalists will be presented to Mr. Malone and the Hall of Fame’s selection committee. The winner of the 2021 Karl Malone Power Forward of the Year Award will be determined by a combination of fan votes and input from the Basketball Hall of Fame’s selection committee. Naismith Starting Five Fan Voting presented by Dell Technologies will go live on Friday, February 26 on hoophallawards.com.

“I am thankful for the honor to annually present an award bearing my name,” said Karl Malone, Basketball Hall of Fame Class of 2010. “Over the past six years, we have recognized some truly gifted athletes who have gone on to have great success in the game. The player who is selected to join the fraternity of this award should be very proud to be in such elite company.”

The winner of the 2021 Karl Malone Award will be presented on ESPN, along with the other four members of the Naismith Starting Five. Additional awards being presented include the Bob Cousy Point Guard Award, the Jerry West Shooting Guard Award, the Julius Erving Small Forward Award and the Kareem Abdul-Jabbar Center Award, in addition to the Women’s Starting Five. Additional information about the award presentation, including date and time, will be released in the coming weeks.