Indiana falls apart during second half in loss to Michigan State 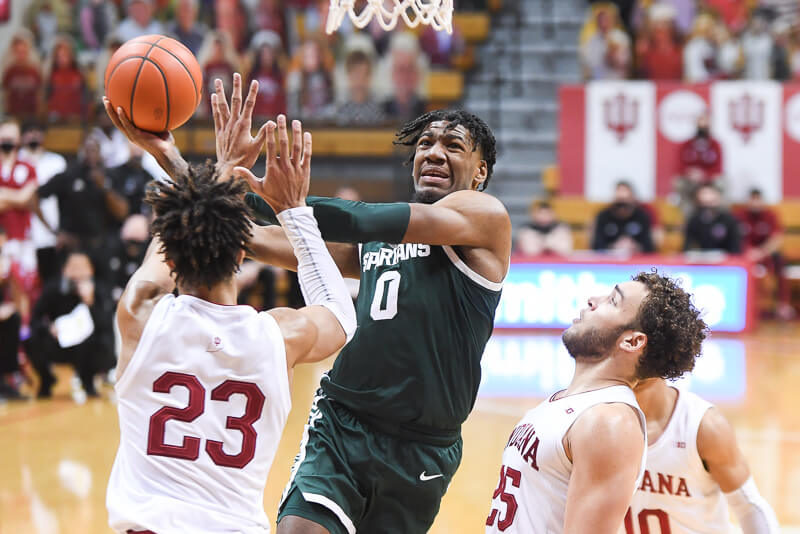 At halftime on Saturday afternoon, Indiana trotted into the locker room with a four-point lead. They hadn’t played exceptionally well. But they hadn’t played badly, either. There was no slow start.

In fact, the Hoosiers jumped out to a 19-6 lead by midway through the first half. Michigan State looked exactly like the underperforming team they had been all season. They gave the ball away left and right, committing 10 first-half turnovers.

Indiana’s halftime lead was as much a product of Michigan State’s horrendous play as it was the Hoosiers’ own production. Still, Indiana was in a solid position at the break with a 30-26 lead.

But then came the second half, and every ounce of Indiana’s momentum dissipated. The Hoosiers collapsed and were outscored by 11 in the second half. Trayce Jackson-Davis’ 34 points went to waste and Indiana fell in a disappointing 78-71 loss.

“As the course of the half went along there were too many errors,” Indiana head coach Archie Miller said. “I think we let Michigan State continue to build confidence throughout the game as they hung around.”

Early in the second half, Indiana extended its lead to nine before everything started to fall apart. The swing, in large part, can be attributed to Indiana’s defensive effort, which was quite possibly its worst performance on that side of the ball this season.

Michigan State scored 52 points in the final 20 minutes. In a loss to Purdue earlier this season, the Spartans scored 54 points in the entire game.

The defensive struggles begin with Indiana’s inability to stay in front of the ball. The same principle was evident against Minnesota on Wednesday when Jamal Mashburn Jr. torched Al Durham off the bounce.

On Saturday, it was Aaron Henry and Joshua Langford that the Hoosiers couldn’t contain. There were multiple occasions where Henry used a pump fake to get an Indiana defender in the air and off-balance. Henry and Langford often drove into the lane with ease.

“We didn’t have a real good matchup for him,” Miller said of Henry. “He jumped over top of us, played bigger.”

When Henry and Langford didn’t decide to take it to the cup themselves, there were shooters waiting on the perimeter. During those drives, Indiana’s rotations were slow, leaving shooters on the perimeter with plenty of time to collect themselves. As a result, Langford tallied five assists.

Michigan State’s Gabe Brown was the benefactor from the drive and kick-outs. He knocked down four 3-pointers, including three in the second half. Sophomore guard Rocket Watts added another.

When Michigan State did miss, they were able to crash the offensive glass. In the second half, the Spartans cashed in 10 points on five offensive boards.

In this case, Indiana’s defensive flaws came down to discipline on the fundamentals. After Indiana’s loss to Purdue earlier this season, Miller focused on the defensive basics in practice and there was some improvement in the togetherness. On Saturday, though, there was more regression.

The other side to the second-half meltdown was Indiana’s offensive inconsistencies. The Hoosiers were carried by Jackson-Davis, Race Thompson and Armaan Franklin on the offensive end. The trio combined for 62 of Indiana’s 71 points.

Other than that, there were very few contributions. Al Durham had just four points and Rob Phinisee, one game after putting together a stellar performance against Minnesota, was held scoreless.

There wasn’t much lift from the bench, either. Jerome Hunter finished with all of Indiana’s five bench points. Khristian Lander, Anthony Leal and Trey Galloway weren’t able to provide a spark. Jordan Geronimo didn’t see the floor at all.

“Bad plays,” Miller said. “Took momentum away and speared it away from ourselves.”

Indiana took momentum away from itself in the scope of the season, too. Saturday was an opportunity for the Hoosiers to break above the .500 mark in Big Ten play for the first time all season. A win would’ve meant another step toward securing an NCAA tournament bid.

Instead, the Hoosiers coughed up the opportunity. Now they head into a challenging final four games of the regular season straddling the bubble.

Again, the Hoosiers were unable to put together a full 40-minute performance. If they still have hopes of making a run in March, they’ll need to figure it out soon.