At The Buzzer: Michigan State 78, Indiana 71 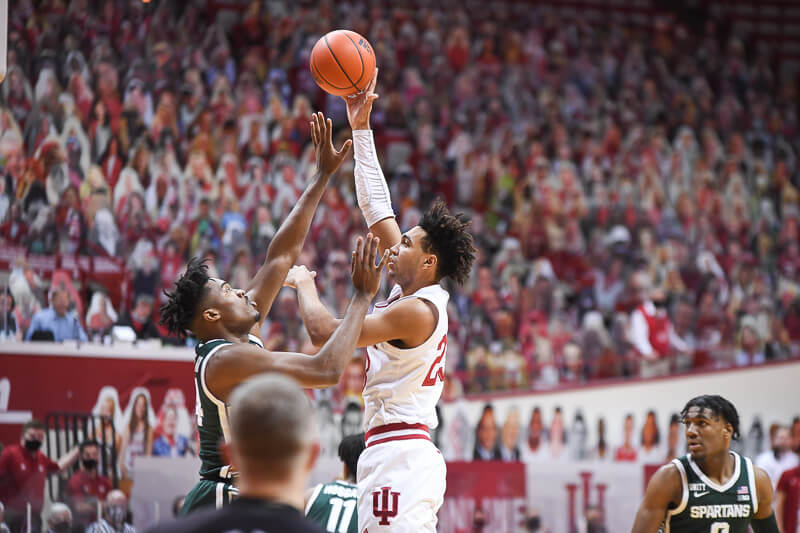 Quick thoughts on a 78-71 loss to Michigan State:

How it happened: It looked like Indiana might run Michigan State right off Branch McCracken Court on Saturday afternoon. The Spartans couldn’t take care of the ball early and Indiana pounded the ball inside to Trayce Jackson-Davis. By the 11:15 mark of the first half, Indiana led 19-6. But the Hoosiers didn’t put their foot down and extend the lead further as Michigan State started to gain some confidence offensively. By the 2:52 mark, Michigan State had tied the game on an Aaron Henry jumper. Indiana closed the half with the final four points and led 30-26 at intermission, but it felt like the Hoosiers missed an opportunity to have far more breathing room going into the locker room. The Hoosiers got some clean looks, but were just 2-of-10 on 3s in the first half.

To start the second half, Indiana went back inside to Jackson-Davis and Race Thompson. The duo scored Indiana’s first eight points of the half as IU pushed the lead to nine at 38-29. Michigan State quickly got back within five, but Indiana punched it back out to 10 on a 3-pointer from Armaan Franklin and a putback from Thompson. Michigan State, however, had an answer. The Spartans closed the margin to four at 48-44 by the under 12 media timeout on a 3-pointer by Gabe Brown. Michigan State got within one at 50-49 on a Joshua Langford 3-pointer and then tied it at 52 on a 3-point play by Langford with 9:03 to play. Michigan State took its first lead on an Aaron Henry runner at 54-52 and stretched it to five on a Gabe Brown 3-pointer at the 7:56 mark. Indiana never regained the lead as the Hoosiers dropped their fifth conference game at home.

Standout performer: Jackson-Davis was unstoppable for Indiana, finishing with 34 points and nine rebounds in 37 minutes.