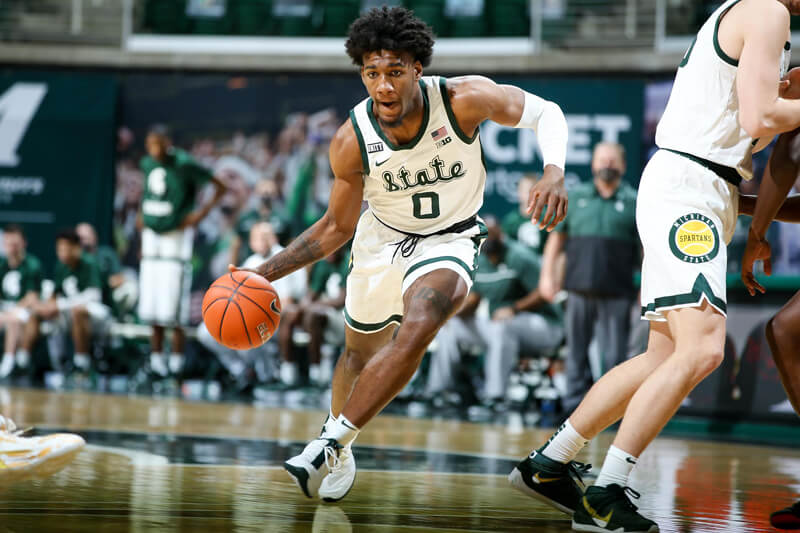 Indiana will look for its fourth win in five games on Saturday when it hosts Michigan State on Saturday at Simon Skjodt Assembly Hall. The Spartans are 10-9 overall, but just 4-9 in Big Ten play.

Saturday’s game will tip at 12 p.m. ET on ESPN with Jason Benetti and Dan Dakich on the call:

Indiana has an opportunity to solidify its standing for the 2021 NCAA tournament when Michigan State comes to Bloomington this weekend.

Following its heartbreaking 75-71 home overtime loss to Illinois on Feb. 2, Indiana was just 9-8 overall and 4-6 in league play. Since then, the Hoosiers have beaten Iowa and Minnesota at home and Northwestern in Evanston.

At 12-9 overall and 7-7 in league play, Indiana is currently in the tournament in most projections. And while a win on Saturday won’t necessarily move the Hoosiers up the S-Curve, the contest is the last opportunity on the schedule for another quad 3 loss.

Picked to finish fourth in the Big Ten back in November, Michigan State’s lack of a succession plan for Cassius Winston and Xavier Tillman has resulted in a dud of a season so far in East Lansing.

It was never going to be easy to replace either player, but the Rocket Watts point guard experiment was a flop and Tom Izzo has been unable to find consistent production out of his frontcourt. Barring a late season turnaround, Michigan State will miss the NCAA tournament for the first time since 1997.

Junior wing Aaron Henry is Michigan State’s best player, but his efficiency has continued to decrease as his usage has increased. The 6-foot-6 forward is averaging a team-high 14.3 points, but is shooting just 28.8 percent on 3s and 49.7 percent on 2s.

Henry is 13th in the Big Ten in assist rate, which highlights his ability to create for others, but he also has a team-high 54 turnovers in 19 games. As his shot chart below shows, Henry likes to operate quite a bit in the mid range: 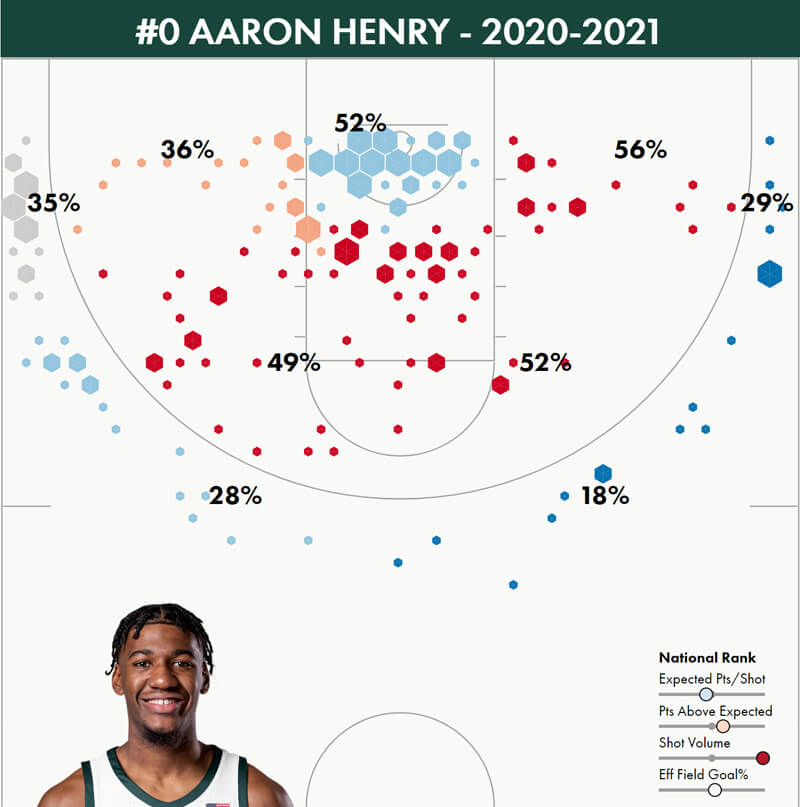 The only other Spartan averaging in double figures is Marquette transfer Joey Hauser, who sat out last season and was expected to be a major addition this season. After shooting 42.5 percent on 3s at Marquette as a freshman back in the 2018-19 season, the 6-foot-9 Hauser is connecting at just a 35.1 percent clip this season. He is shooting a solid 53.5 percent on 2s in Big Ten play, but has a high turnover rate (23.6%) and is a poor offensive rebounder for his size.

Redshirt senior guard Joshua Langford has played in 18 of the team’s 19 games after battling injuries for a large part of his career in East Lansing. A former McDonald’s All-American, foot injuries have prevented Langford from realizing his full potential. Langford is shooting a solid 36.4 percent on 3s this season, but he’s playing just 25.8 minutes per game. Langford’s 9.3 points per game are third on the team.

Izzo’s goal was to move Watts to the point guard position, but that plan failed early in the season. Watts asked to no longer play point guard in late December and has been coming off the bench ever since. Watts is far more of a natural scorer than a faciliator, but has been unable to get going in his sophomore season. He’s shooting just 27.9 percent on 3s and 37.6 percent on 2s this season. In Big Ten play, he’s making only 28.3 percent of his 2s. Watts is as talented as any player on the Michigan State roster, but his inability to make a leap in his second season has been devastating to the Spartans. 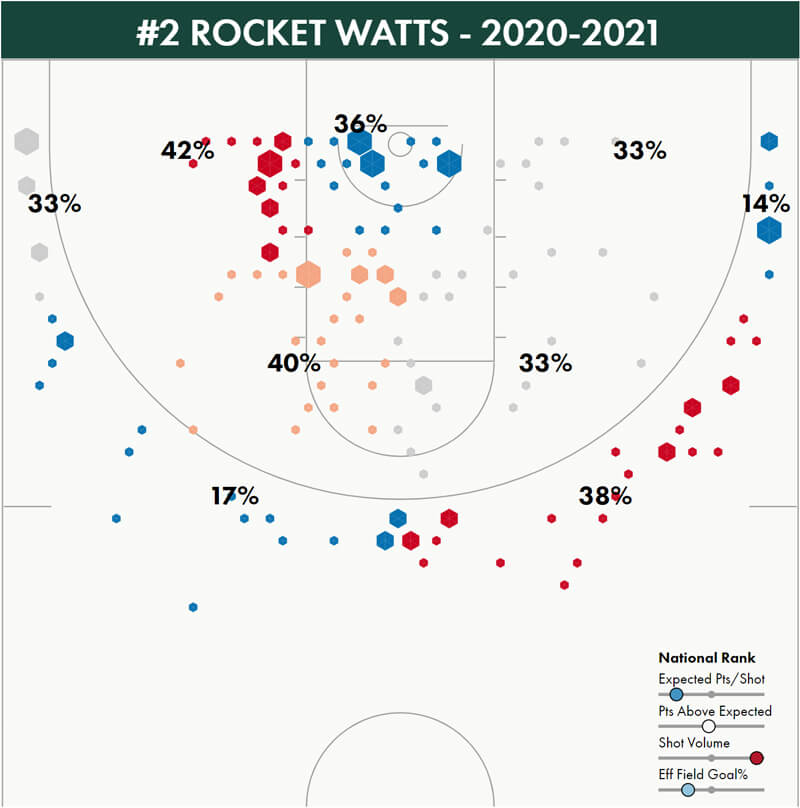 Freshman A.J. Hoggard, a top 100 recruit, has been thrown into more minutes than anticipated and is learning to play point guard on the fly in the Big Ten. Hoggard is shooting just 31.5 percent this season and has 32 assists in 17 games.

The other point guard option, junior Foster Loyer, is expected to miss at least a week due to a shoulder injury.

The rest of the Michigan State rotation is tough to figure out as Izzo played 12 different guys in the most recent loss to Purdue in West Lafayette.

Junior Thomas Kithier has started 14 of the team’s 19 games and is shooting a solid 65.8 percent from the field while averaging three points and 2.7 rebounds.

Sophomore Malik Hall and junior Gabe Brown both log minutes on the wing and have mostly come off the bench this season. Brown is the team’s best 3-point shooter (45.1 percent) while Hall is third on the roster in rebounding at 4.9 per game.

Freshman Mady Sissoko, junior Marcus Bingham Jr. and sophomore Julius Marble comprise the remainder of the frontcourt rotation. Bingham has a team-high 25 blocks, Sissoko is a top 100 recruit who needs seasoning and Marble is shooting 63 percent while averaging 4.3 points in just 8.9 minutes per game.

• Capitalize on Michigan State’s turnovers: The Spartans have struggled to take care of the ball all season, ranking last in the conference in turnover percentage at 19.1. Michigan State also ranks 328th nationally in terms of turning its opponents over, so the points off turnovers battle is an important one for Indiana to win on Saturday afternoon.

• A parade to the free throw line? In addition to its turnover woes, Michigan State is last in the conference in opponent free throw rate (FTA/FGA) at 37.4 percent. Indiana has also struggled to keep its opponents off the line, but the Hoosiers are first in terms of getting to the line with a free throw rate of 41.1 percent. Indiana was able to step up and knock down its opportunities from the stripe in Wednesday’s win over Minnesota, but is 12th in the conference in free throw percentage at 66.9.

• Pound the ball inside to TJD: Michigan State’s frontcourt rotation has struggled all season and defending elite post players has been an issue. Saturday should mark another opportunity to establish Trayce Jackson-Davis early and often, which should free up shots on the perimeter as well as some driving lanes for Indiana’s guards.

Michigan State comes into Bloomington reeling as its only Big Ten road win this season was at Nebraska back on Jan. 2. The Spartans have lost two straight and six of their last eight contests.

The KenPom projection is Indiana by seven with a 74 percent chance of victory and the Sagarin numbers like the Hoosiers by five. Indiana has beaten Michigan State three straight times and a fourth straight victory over the Spartans would propel the Hoosiers one step closer to an NCAA tournament bid.