At the buzzer: Indiana 79, Northwestern 76 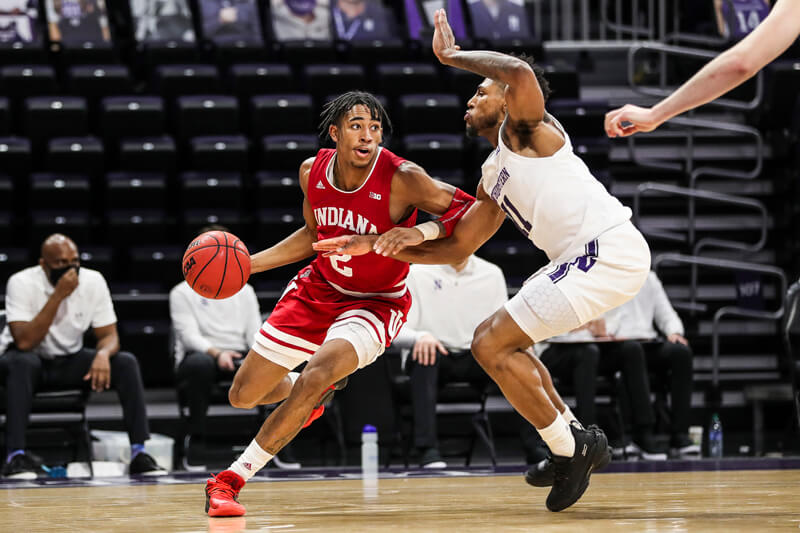 Quick thoughts on a 79-76 double-overtime win at Northwestern:

How it happened: Indiana had another one of its patented slow starts offensively at Welsh-Ryan Arena. The Hoosiers didn’t score a point in the game’s first 5:35 and trailed Northwestern by 14 at the 7:41 mark of the first half. But even with the dreadful offensive start, the Wildcats couldn’t pull away. And as Northwestern produced a lengthy scoring drought of its own, Indiana climbed right back into the game. By the 2:32 mark, Indiana was within three and a late Trayce Jackson-Davis bucket – his first and only field goal of the half – sent IU into half trailing 23-20. Indiana shot just 24.1 percent from the field and committed seven turnovers. The Hoosiers were fortunate to trail by just three.

The turnover woes extended into the second half. The Hoosiers committed five in less than 10 minutes to begin the frame and that fifth mishap turned into a Robbie Beran 3-pointer to stretch the Northwestern lead to six at 39-33. The Wildcats stretched the lead to seven on a Ryan Greer 3-pointer with 7:41 to play, but Indiana answered right back with an Armaan Franklin 3-pointer just nine seconds later. Northwestern responded with a 3 from Robbie Beran and a basket from Greer to stretch the lead out to nine with 6:22 to play.

Out of the under four media timeout, Indiana scored on a Jackson-Davis dunk out of set play to cut it to three, but Northwestern answered with a bucket from Greer to stretch the lead back to the five. After a Rob Phinisee turnover, Northwestern got a bucket from Ryan Young to push the lead back to seven. Indiana split a pair of free throws from Al Durham Jr. on the next possession. The Hoosiers then got a steal that led to two Durham free throws and picked up another steal from Franklin that led to two more Durham free throws to cut the lead to two. The Hoosiers then got a stop and a bucket from Durham with 25.8 seconds to play to tie the game at 54. IU had two fouls to give and used them both as Northwestern didn’t get a shot off its final inbounds attempt with 3.9 seconds to play.

Standout performers: Armaan Franklin still turns it over too much, but he remains a consistent scorer for the Hoosiers despite not being at 100 percent healthy. Franklin scored 23 points on 6-of-15 shooting. Durham had a team-high 24 points and made 11-of-12 free throws.