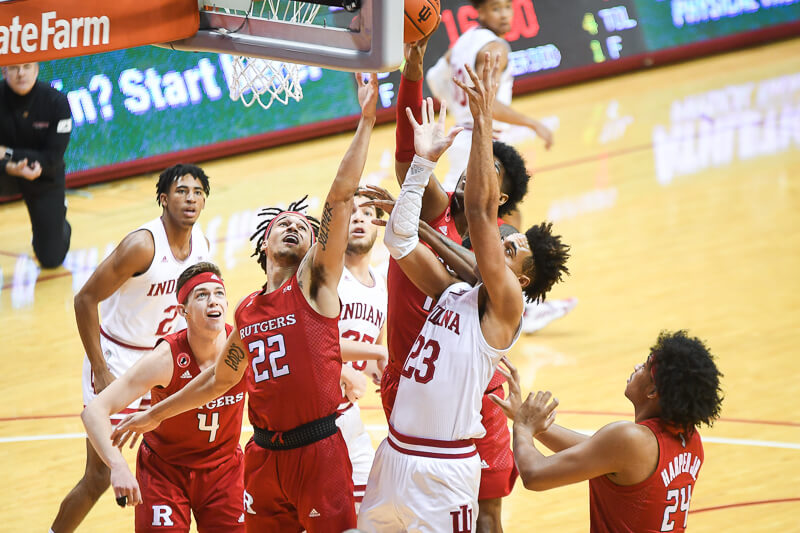 How it happened: Indiana should have had momentum entering Sunday’s matinee against Rutgers in Assembly Hall. The Hoosiers were coming off of an 81-69 win at Iowa, their most impressive performance of the season. But a lackluster defensive performance in the first half allowed Rutgers to gain confidence right from the opening tip. By halftime, the Scarlet Knights were a confident group offensively based on a 16-of-27 shooting performance from the field. Indiana also didn’t help its cause by struggling to finish 2s in the first half (8-of-19). The final play of the first half was a put-back layup by Caleb McConnell at the buzzer after Indiana missed a blockout. So rather than being down just three, the Hoosiers entered the break trailing by five.

Indiana’s struggles continued as the second half began. The Hoosiers had five turnovers in a two-minute stretch early in the half. And Rutgers continued to get what it wanted offensively. By the 11:54 mark, Rutgers led 55-41 after a layup by Cliff Omoruyi. The Hoosiers, however, jumped right back into it over the next four minutes. Freshman Khristian Lander hit two 3-pointers as IU went on an 18-6 run to get within three at 62-59 at the 7:53 mark. The Hoosiers, however, couldn’t get closer than that the rest of the way. Each time Rutgers presented an opportunity to close the gap, Indiana failed to capitalize. The end result was a third home conference loss for the Hoosiers, who aren’t scheduled to play again until Feb. 2 against Illinois in Bloomington.

Standout performer: It was a rough afternoon for Armaan Franklin, who appeared to reinjure his ankle in the first half. Franklin finished with a team-high 14 points, but shot just 4-of-11 from the field.