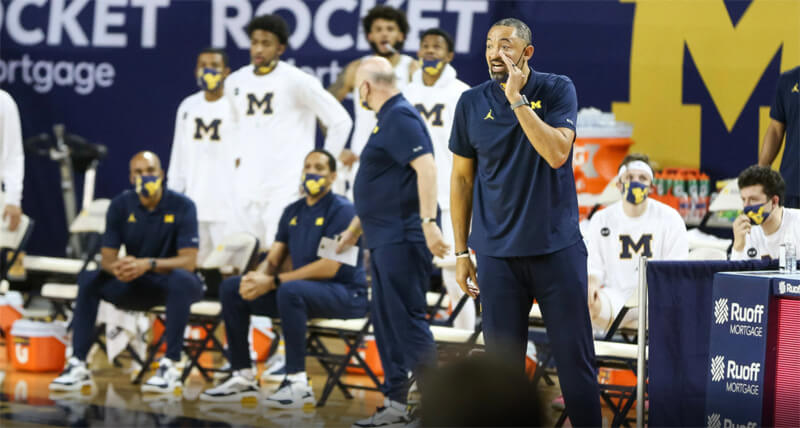 According to a report from The Michigan Daily, the Michigan Athletic department will shut down all programs for a period of at least two weeks due a surge in COVID-19 cases.

Indiana was scheduled to play the Wolverines on Jan. 30 in Ann Arbor at 12 p.m. ET in a game that will now be postponed due to an order from the state health department to shut down:

All University of Michigan athletics will be paused for two weeks starting Sunday, Jan. 24 in accordance with an order from the state health department according to messages obtained by The Daily and confirmed by a source close to the athletic department. The order, which halts all athletic activity including practice, is limited exclusively to U-M athletics after a recent influx of positive cases within several Michigan teams.

A source told The Daily that there were five confirmed cases of the new COVID-19 B.1.1.7 variant, with 15 more presumed positives throughout the athletic department. The novel strain was first introduced at the beginning of the semester by a U-M athlete from the United Kingdom. All members of the athletic department are expected to quarantine for 14 days.

Brendan Quinn of The Athletic confirmed the reporting from The Michigan Daily late Saturday night.

This postponement would be Indiana’s second of the season as the Hoosiers didn’t play at Michigan State on Jan. 17 due to multiple positive COVID-19 cases in the Spartan program.

After Indiana plays Rutgers on Sunday at Simon Skjodt Assembly Hall, the Hoosiers won’t have another scheduled game until Tuesday, Feb. 2 against Illinois in Bloomington.

ANN ARBOR, Mich. — Under a Michigan Department of Health and Human Services (MDHHS) decision made Saturday (Jan. 23), the University of Michigan Athletic Department will immediately pause athletic activities in all sports, including games, team and individual training sessions, until further notice and up to 14 days.

While U-M has worked diligently on testing and reporting within state and Big Ten Conference guidelines, the Michigan Department of Health and Human Services is mandating a more aggressive strategy for this B.1.1.7 variant, which exceeds current program efforts designed around the standard form of the virus.

The mandate follows positive test results for the SAR-CoV-2 B.1.1.7 variant virus infections from several individuals linked to the U-M Athletic Department through its diligent testing regiment. The B.1.1.7 variant is thought to be approximately 50 percent more transmissible than the standard form of the virus, leading to faster spread of the virus, potentially increased numbers of cases, and additional hospitalizations and deaths. Therefore, a pause of all athletic activities and a closure of all U-M athletic facilities are being taken to strengthen the public health intervention. Team members (student-athletes, coaches, and team staff) must immediately isolate/quarantine effective Jan. 23 until further notice and up to 14 days (Feb. 7).

“Canceling competitions is never something we want to do, but with so many unknowns about this variant of COVID-19, we must do everything we can to minimize the spread among student-athletes, coaches, staff, and to the student-athletes at other schools,” said Warde Manuel, the Donald R. Shepherd Director of Athletics.

University public health officials are working closely with the Washtenaw County Health Department and Michigan Department of Human Health Services on additional mitigation strategies to address the COVID-19 B.1.1.7 variant in the university community. The university will be carefully considering additional mitigation measures. There are many unknowns that remain under investigation by U-M, local and state public health officials.

No determination has been made on how the pause may impact scheduled games beyond Feb. 7.