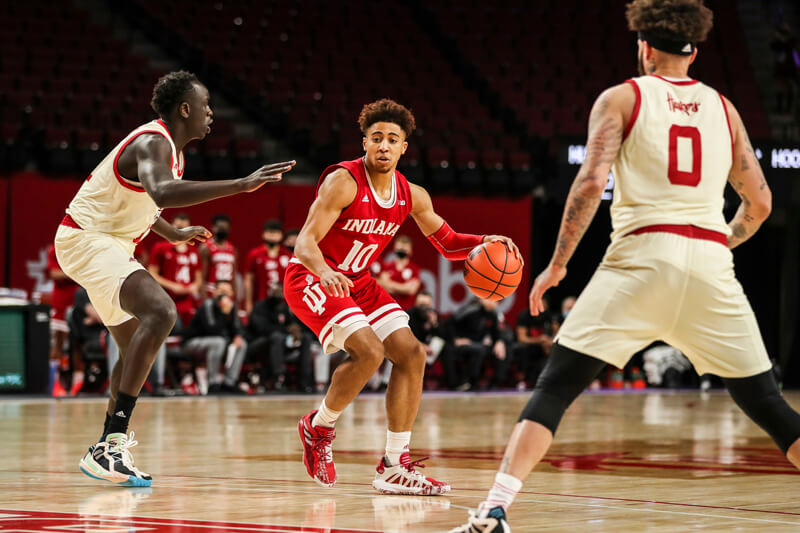 How it happened: Indiana came out firing on all cylinders offensively at Pinnacle Bank Arena. Nebraska was determined to take Trayce Jackson-Davis away in the post and as a result, gave the Hoosiers space on the perimeter to hoist up 3-pointers. By the 10:03 mark of the first half, Indiana had amassed 31 points and led 31-13. Nebraska, however, had an answer and cut Indiana’s lead down to eight by the 2:25 mark on a layup by Derrick Walker. Rob Phinisee, who scored 16 points in the first 14:32 of the half, went down with an apparent leg injury with 1:48 to play in the half. The Hoosiers would go on to score the final four points of the frame and went into the break leading 46-34. IU’s first half offensive numbers were impressive: 1.27 points per possession, 7-of-13 on 3s and an effective field goal percentage of 63.

Phinisee was on the floor to begin the second half and pushed IU’s lead back to 10 with a layup at the 17:36 mark. By the under 16-media timeout, IU’s lead was back to 14 at 55-41. After a free throw from Jackson-Davis stretched the lead back to 15 at the 15:53 mark, Nebraska answered with a 14-4 run to get within five at 60-55 at the under 12 media timeout. The offensive onslaught by the Huskers continued as they were able to spread Indiana out in the halfcourt.

Nebraska grabbed its first lead of the second half at 63-62 on a Kobe Webster 3-pointer from the corner. A 3-pointer from Anthony Leal tied it at 69 with seven minutes to play and by the under four timeout, Indiana led 73-71 following a layup from Jackson-Davis. Four straight free throws from Jackson-Davis helped stretch its lead to 77-72 with 2:50 to play, but Teddy Allen answered with a 3-pointer to get the Huskers within two with 2:08 to play. On IU’s next possession, Jerome Hunter missed a tough shot from the corner, but followed his shot and got a layup to give IU a four-point lead with 1:33 to play. The Huskers would get no closer the rest of the way as IU made enough free throws down the stretch for its first road win in league play.

Standout performers: Phinisee’s 18 points led the Hoosiers, with 16 of those coming in the first half. Jackson-Davis had 13 of his 15 points in the second half. His work at the free throw line was especially important as he knocked in 9-of-14 on the evening.