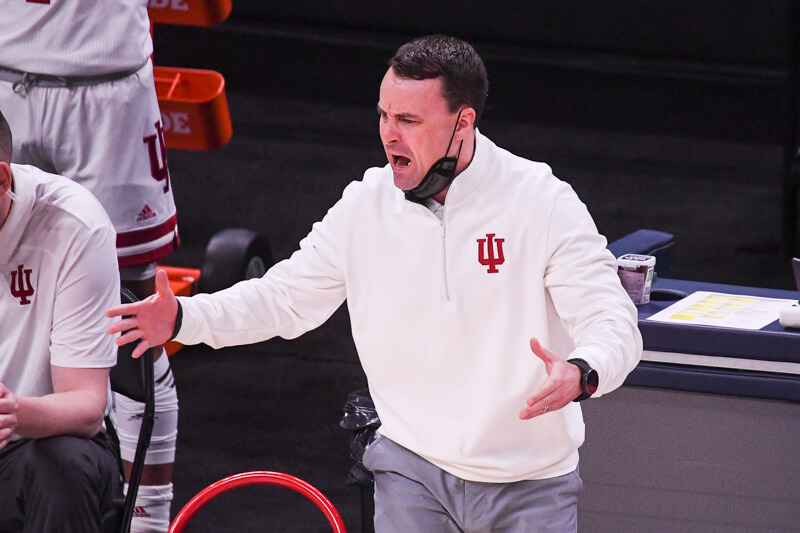 – Miller opens by saying he was pleased with Indiana’s offense in the first half against Butler, but the Hoosiers were over-powered by the Bulldogs’ physicality. “When you play Butler, it’s a physicality game,” Miller said. “You have to be able to match that.”

– Miller said they addressed the physicality of the game at halftime and “got our feet dug in a little bit.” Miller said he was happy with how Indiana was able to turn defense into offense in the second half.

– On Trey Gallway, Miller said: “He’s a throwback, old school type player.” Miller praised Galloway’s ability to maneuver in transition and drive the ball into the paint. From the game against Butler, Miller said: “He impacted the game without scoring. As we get into Big Ten play, he’s going to make more shots.” Miller also said Galloway has made a fairly smooth transition to playing defense at the collegiate level.

– Miller said the freshman class needs to step up to help create a deeper bench. On Anthony Leal, Miller said he “is right there ready to help us… I wouldn’t be surprised if he starts to play more than a role.” Miller also names Khristian Lander and Jordan Geronimo as guys that need to provide a spark off of the bench.

– Armaan Franklin hit 10 3-pointers in the last two games and Miller said a big part of that success is taking shots in “rhythm.” He also notes Franklin has taken pride in improving his shot in the offseason.

– Miller said Rob Phinisee can also contribute from 3-point range, but needs to find a way to stay out of foul trouble. Miller said he needs to have extra attention to detail to make sure he’s not picking up cheap fouls.

– Miller said a good amount of the team’s turnovers are fundamental, calling them “sloppy.” Miller said the team needs to make the simple play and “as we move into conference play we have to keep that about 10 a game. That’s the magic number.”

– Fischer calls the Big Ten a “meat grinder.” Miller agreed, saying that this year will be as difficult, if not more than last season. “It’s going to be a mental challenge to not break down.” Miller pointed out, though, that the conference’s depth will help come tournament time as it will help IU’s overall resume.

– Miller said he was impressed with Northwestern’s upset over Michigan State on Sunday night. “As good as an offensive performance as you will see,” Miller said. The Hoosiers host the Wildcats on Wednesday and Miller named Miller Kopp, Boo Buie and Pete Nance as potential threats.

– Indiana will then travel to Illinois on Saturday. Miller said Illinois runs its game through center Kofi Cockburn. He praised their guards, especially Ayo Dosunmu who he called one of the best players in college basketball.

– Regarding no fans, Miller said that every team in the Big Ten is dealing with the same situation. He joked that Indiana should bring people to “throw things at opposing buses” to compensate for the empty Assembly Hall.