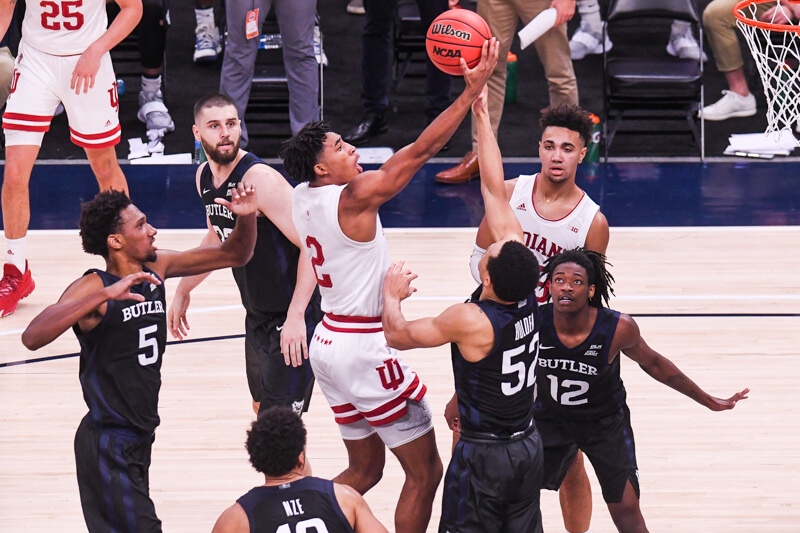 How it happened: It was a tale of two halves defensively for Indiana on Saturday afternoon at Bankers Life Fieldhouse. The Hoosiers seemed content to trade buckets early on and as Butler gained confidence (5-of-7 on 3s in the first half), the Bulldogs opened up a nine-point lead late in the opening half at 37-28. Indiana closed the gap with the final four points to make it a five-point deficit at halftime, but the ledger on the defensive performance was not pretty. Indiana allowed Butler to score 1.14 points per possession before intermission, which is not sustainable for this group to win games. But the Hoosiers responded in the second half. A 15-3 run to begin the half put the Hoosiers ahead 47-40. By the under eight timeout, Indiana led 53-45. It was a dominant defensive performance in the second half as Indiana held Butler to just 23 points on its way to a fifth non-conference win. The Bulldogs shot just 26.7 percent in the second half after shooting 53.8 percent in the first half.

Standout performer: Sophomore Armaan Franklin continued his hot shooting in Bankers Life as he scored 13 of his 20 points in the first half. Trayce Jackson-Davis was equally impressive with 21 points and eight rebounds in 35 minutes.