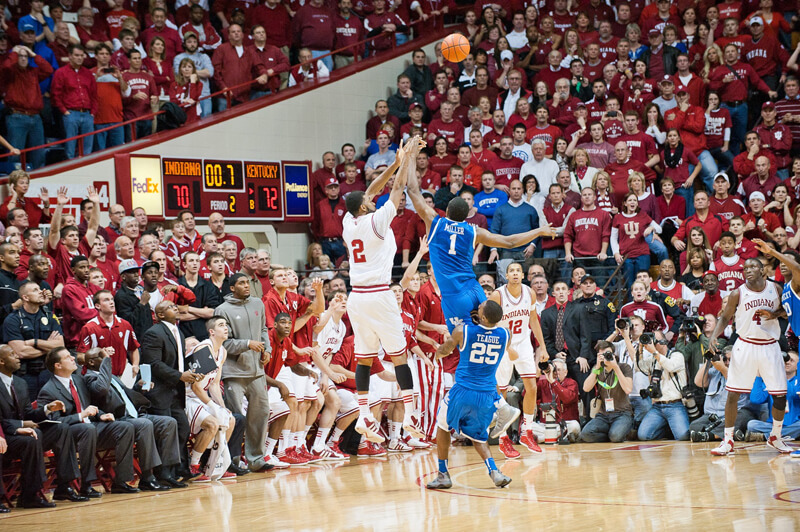 BTN will debut two new documentaries this week on IU basketball, including one with a focus on Christian Watford’s shot to beat Kentucky in 2011.

Inside the Hall photographer Jamie Owens is expected to be featured in the documentary on Watford’s shot, which will air Thursday night at 9 p.m. ET.

A second documentary, titled Not Pictured, will air Thursday at 7:30 p.m. ET. It focuses on Beford native Bill Torphy, a member of Indiana’s 1940 national championship team.

Thursday will on BTN will feature all content related to Indiana. Here’s the full release from IU on the two new documentaries as well as a schedule for Thursday’s programming:

This week, Hoosier fans will have the opportunity to learn about one, and discover more about the other.

Beginning at 6 a.m. ET Thursday, June 11, and continuing through 5 a.m. Friday, June 12, the Big Ten Network will devote its coverage to great moments, victories, and stories about IU sports as part of its Big Ten Network Takeover. Highlighting the 23 hours of coverage is the debut of two new documentaries about these former IU Basketball players.

The Blueline Pictures short documentary, Not Pictured, tells the story of Bedford’s Bill Torphy, a member of IU’s first National Championship team in 1940 who was not only lost too early, but whose presence on that ground-breaking team was all but forgotten for decades. The documentary will air for the first time Thursday at 7:30 p.m. EST.

At 9 p.m. Thursday, Watford will be featured in the BTN’s new documentary series, The B1G Moment. The new documentary series will provide a half-hour deep dive into the context and great stories that surrounded Watford’s unforgettable buzzer-beating 3-pointer that lifted the Hoosiers to a stunning upset win over No. 1 Kentucky in 2011, and announced IU Basketball’s return to national prominence.

In addition to those two documentaries, there will also be another opportunity to see Blueline Pictures documentary Worth the Wait, which chronicles IU Men’s Soccer’s eight-overtime win over Duke in 1982 that earned the program’s first-ever NCAA Championship. While the film is centered on that seminal event, it also details Coach Jerry Yeagley’s journey in building the program from an intramural sport to varsity status. It offers perspectives from Yeagley and many of the other influential individuals who helped build the program from the ground floor, and those who have subsequently maintained that level of excellence since Yeagley’s retirement. The film will air Thursday at 11 a.m.

A complete listing of the BTN’s upcoming programing is: