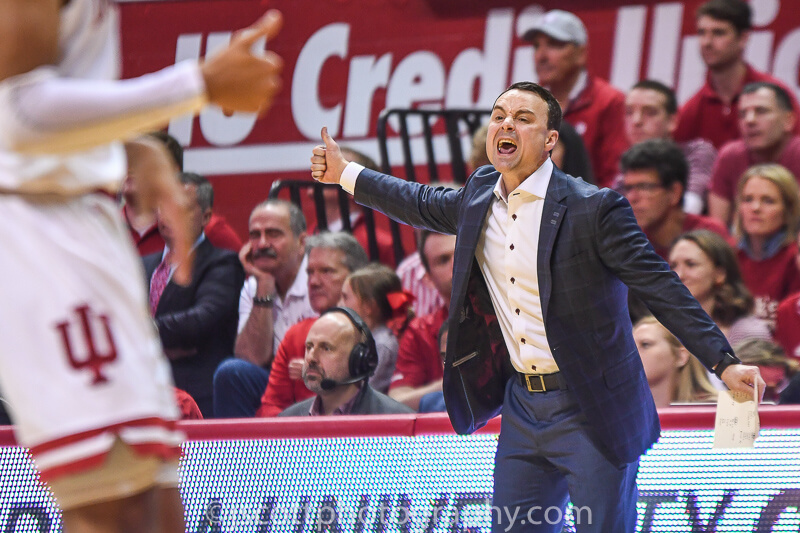 In advance of this week’s Big Ten tournament in Indianapolis, the league held a conference call Monday morning featuring all 14 coaches.

Here are quotes from what Archie Miller had to say on the call:

I think everybody here that gets ready to start (the) Big Ten Tournament probably took a deep breath here in the last 12 to 24 hours, kind of looked back on the grind of the regular season and put it into perspective for their own teams, especially ours, I know we did.

It’s an unprecedented league this season. It was, from the start of the year to Sunday evening, start to finish the best league in America, the deepest league in America. The coaches and especially the players, the fans in general, the level we were at this year was absolutely incredible to be a part of, with 12 teams for two-and-a-half, three months basically competing not only for at-large berths but seeding and whatnot. It’s very, very difficult to navigate that through the highs and the lows. I think every coach probably looked at his own team and really was proud at different times of how you have to get through it, and for us we’re n different.

We’re playing good basketball right now, playing very, very hard. I think offensively, although we struggled against a terrific Wisconsin team the last eight minutes at home the other day being able to put the ball in the basket a little bit, I think we’re playing with a bit more purpose.

What are the specific challenges of trying to beat this Nebraska team three times in one season like you’re preparing to try and do Wednesday night?

Well, we played them ‘early’ early, then we played them at the beginning of really the meat of the schedule for us. In both games they presented a lot of challenges with their offense, five shooters at times on the floor, really spread out with unbelievable pace. They create a lot of problems with their tempo and their spacing.

For us, having to guard the 3-point line and guard the dribble are the two things that stand out in being able to play them. They can really drive (on) you, it puts you in predicaments with one through five off the bounce. In game one really early, they crushed us. We weren’t ready for it. Thought in game two we did a much better job defensively, but still you look back on the games and we had a hard time guarding them.

I think Cam Mack is one of the premier point guard passers, especially off ball screens, in the country. (Dachon) Burke at both ends of the floor, causing a lot of problems. Haanif Cheatham, and now (Jervay) Green being available on the wing spot gives them more versatility and size off the dribble and scoring.

I really feel like when their five men can put together a game, they’re difficult to guard. For us, we’ve had some success against them on the boards, which is something that can’t go away. But as you go into Wednesday night, you know all bets are off. It doesn’t matter how many times you’ve played a team or how many times you’ve beat them. You want to do a one-game season trying to advance and I’m sure they’re doing the same thing and we’re going to have to really be ready to compete.

What have you made of Jerome Hunter’s development this season and where do you think he can still improve as he continues to develop?

Jerome had about as serious of an injury as I’ve ever been a part of, and to this day he’s still not probably 100 percent. We’re very fortunate he was able to get into the season and have some success early in the year. He’s basically a true freshman, didn’t practice, didn’t participate in anything we did (last season) unlike a lot of guys who get injured or sit out, they’re at least able to participate and work out and he (Hunter) didn’t do that. He wasn’t cleared, realistically, until July or August of this year.

As I view him, he’s a true freshman, and with all true freshman they go through ups and downs. But the ones that have a passion to play, compete, work at it, love the game, they find a way to get better. He did that. Right after we really started Big Ten play in January, he was able to sustain a bit of longer stretches of success. And he played in our development as a team.

We count on him now to play role minutes. I think he’s a lot more confident offensively, especially shooting the ball than he was at the start of the season. Defensively he’s gone through his lumps, as all young guys do, having to guard in college for the first time. But to me, he’s a guy who really embodies the love of the game, love to compete, can play to win, and that shows in the course of a development of a young player and I think that’s a credit to him. We’re really fortunate he was able to develop the way he did because he’s given us some really good moments. He’s added depth to our team, he’s added another perimeter scorer as far as our shooting behind the line, which we need at times and I feel like as we head into a brand new season here, we look at him as guy who can play a big role and continue to develop in the offseason.

Anytime you can have some success in March, that leads you into an offseason of confidence. I think Jerome is at that point.

How much better do you feel about the backcourt as a group now, compared to earlier in the season?

I think our guard play has done a really good job. Rob having seven assists and no turnovers in our finale, and against Minnesota on Wednesday night our backcourt combined for nine or 10 assists and one ore two turnovers, so it’s been a huge part of our season.

When our ups are up they play well. When our downs are down we turn the ball over, in particular away from home it’s been a problem. But I think here in our last eight games we’ve sort of come to grips with how we need those guys to play and I think they’ve embraced it. They’re playing a lot better and our team is now playing a lot more consistent. We’re not turning it over as much which gives us a lot better chance offensively to get fouled, rebound, you know score a little bit more.

But as we head into the postseason, it’s everything. You have to play with less mistakes, every possession matters even more and you’re going to be in a lot, a lot of tough games like we’ve been in the recent past. But for us I think our guys know if we keep our turnovers down it’s a recipe for us to be a lot better and I give those guys a lot of credit. I think they’ve really embraced it, they’ve embodied it. They’re being more aggressive and in particular they’re taking care of the ball in a much better way, which has given us the chance to be a lot more consistent.

You’re going to need guard play this time of year. The postseason comes down at the end of the day to guys stepping up and making plays, and for us it’s going to come down to our backcourt. Can they step up and make plays here in March and find a way for us to be successful and win a few more games?

Here down the line in the next few weeks it’s going to come down to a couple of those guys stepping up and playing like they’ve been doing.