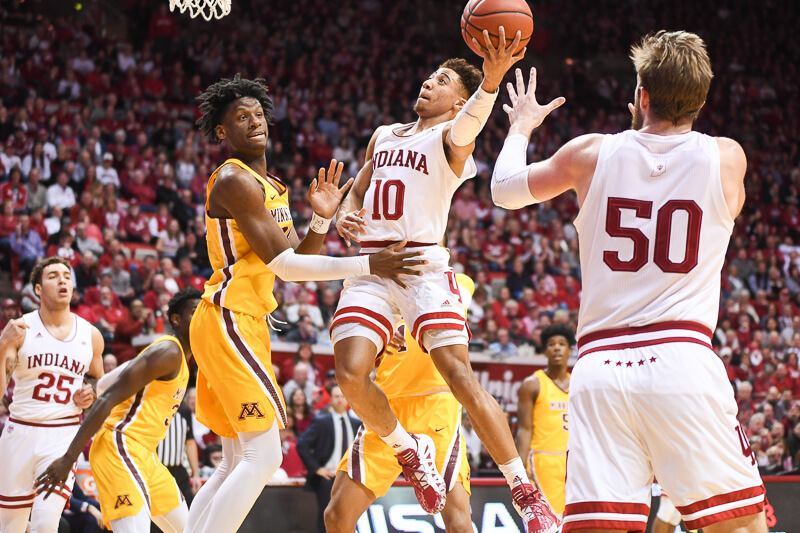 Quick thoughts on a 72-67 win over Minnesota:

How it happened: After back-to-back road losses to Purdue and Illinois, Indiana looked like a team ready to get back on track early on in Wednesday’s game. The Hoosiers raced to an 11-4 lead, which forced Minnesota coach Richard Pitino to burn a timeout. The lead grew all the way to 10 at 25-15 by the 7:40 mark on a layup by Devonte Green. That cushion wouldn’t last long, however, as Minnesota got hot from the perimeter and Indiana relaxed defensively to close the half. In the final 3:05 of the first half, the Gophers splashed in three 3-pointers and went to the locker room leading 34-32. On multiple occasions in the second half, it looked like Indiana might pull away. The Hoosiers built a 7-point lead at the 15:27 mark and an eight-point lead at the 5:39, but each time, Minnesota came storming back. The Gophers, however, would have no answer in the final 3:38. After Gabe Kalscheur missed two of three free throws with 3:02 remaining, Al Durham Jr. sliced through the Minnesota defense to give the Hoosiers a seven-point cushion. Joey Brunk, in his best performance since the Michigan State game, pushed the lead to nine with a bucket on the subsequent possession. Minnesota would get no closer than five points the rest of the way as Indiana secured its 19th win.

Standout performer: Freshman Trayce Jackson-Davis turned in another strong performance with 18 points and nine rebounds in 31 minutes. Jackson-Davis was 8-of-12 from the field.

Statistic that stands out: It was a balanced scoring effort for Indiana as five Hoosiers finished in double figures (Jackson-Davis 18, Brunk 12, Durham 11, Rob Phinisee 11 and Justin Smith 10).