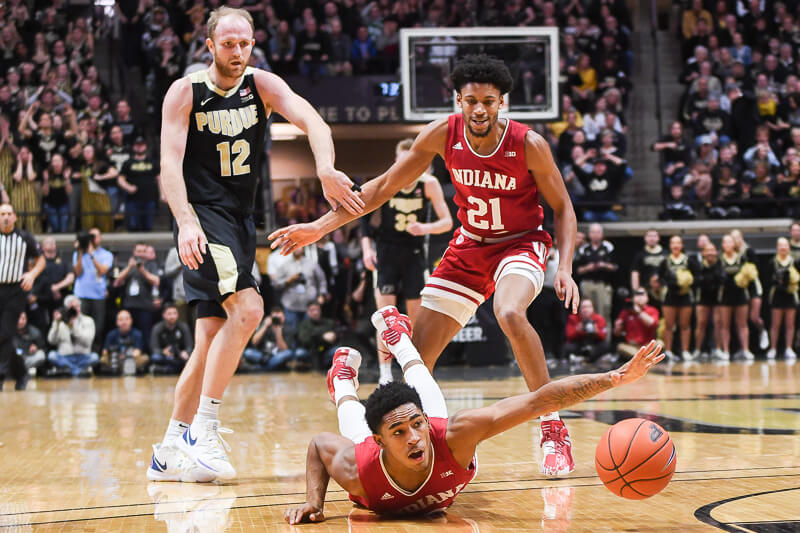 WEST LAFAYETTE – Quick thoughts on a 57-49 loss at Purdue:

How it happened: After an impressive 68-56 win at Minnesota eight days ago, the question entering Thursday’s game at Mackey Arena was simple: could the Hoosiers duplicate the success they displayed at Williams Arena? Early on, it looked like Indiana might put up a fight in one of the league’s toughest road venues. The Hoosiers led 6-2 early and hung around for a majority of the first half. In fact, despite a dismal offensive performance, Indiana trailed just 23-20 with 1:01 to play in the opening period. And then the wheels came off. The Boilermakers scored the final six points of the half – capped off by an Eric Hunter Jr. dunk off a ridiculous IU turnover – to grab a nine-point halftime lead. And it only got worse from there. Purdue opened the second half by scoring the first seven points and IU didn’t make a second half field goal until the 13:37 mark. The Hoosiers never got closer than five the rest of the way. Indiana is now 1-10 in its last 11 games against Purdue and Archie Miller is 0-5 against the Boilermakers.

Standout performer: Race Thompson was a bright spot for the Hoosiers as the redshirt sophomore continues to make the case for a spot in the starting lineup. Thompson finished with six points, eight rebounds, two blocked shots and two steals.

Statistic that stands out: Indiana shot a dismal 15-of-59 from the field (25.4 percent) and scored just .76 points per possession.