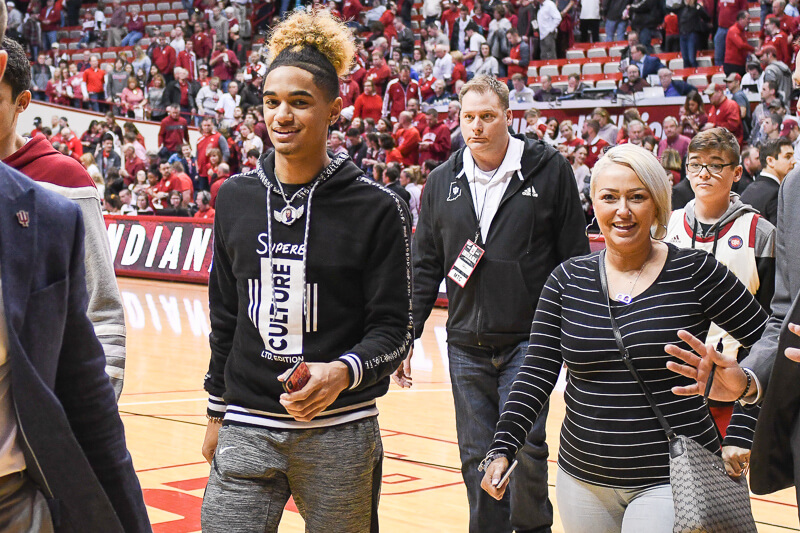 Class of 2021 Evansville Reitz point guard Khristian Lander committed to Indiana on Tuesday, he announced on his Instagram account.

I want to say thank you to all of the coaches that have ever recruited me and that have taken the time out their day to do so. This was a long thought out decision but I’ve decided on the college I will be attending …..STAYING HOME ??? GO HOOSIERS pic.twitter.com/P0HgzBqUJg

The No. 11 player in the class of 2021 according to the 247Composite, Lander chose Indiana over Michigan, Louisville and Memphis. He also had scholarship offers from Florida, Texas Tech, Illinois, Iowa, Kansas, Kansas State, Ohio State, Memphis, Ole Miss, Purdue, Pittsburgh and Tennessee.

He was in Bloomington on Sunday afternoon for Indiana’s 68-60 win over then No. 9 Penn State.

As Jeff Borzello of ESPN pointed out on Twitter, reclassifying to 2020 has been an option for Lander, who is currently the top rated point guard nationally in the 2021 class.

Lander was an AAU teammate of IU signees Anthony Leal and Trey Galloway last spring and summer with Indiana Elite on the adidas Gauntlet circuit. He took a junior year official visit last fall to Bloomington with Leal and Galloway.