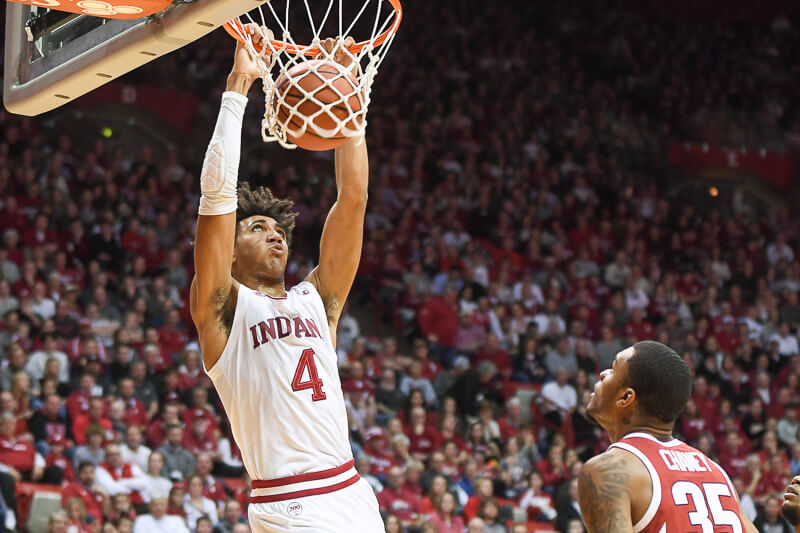 How it happened: Assembly Hall was rocking. And the opponent – Arkansas – brought energy to match the environment. Even as the Hoosiers built an 11-point lead early in the second half, the Razorbacks never went away and kept battling. Isaiah Joe was a major reason for that as the sophomore guard’s hot shooting barrage kept Arkansas within striking distance when Indiana looked ready to push its lead out on a couple of occasions midway through the second half. But when Indiana’s offense sputtered over the last seven-plus minutes – and boy did it ever – Arkansas was ready and waiting to take advantage. As the Hoosiers forgot about Trayce Jackson-Davis and his size advantage in the post, the Arkansas offense got into gear with a 15-1 run. With Indiana clinging to a one-point lead with 3:17 remaining, Mason Jones splashed in a pair of triples to put Arkansas up five with 2:04 to play. The second 3 from Jones was the backbreaker as the Razorbacks handed the Hoosiers their first home loss of the season.

Standout performer: Jackson-Davis finished with 20 points, but attempted just three shots in the second half.

Statistic that stands out: Indiana’s struggles from the free throw line were the difference in the game. The Hoosiers shot just 9-for-18 from the stripe.