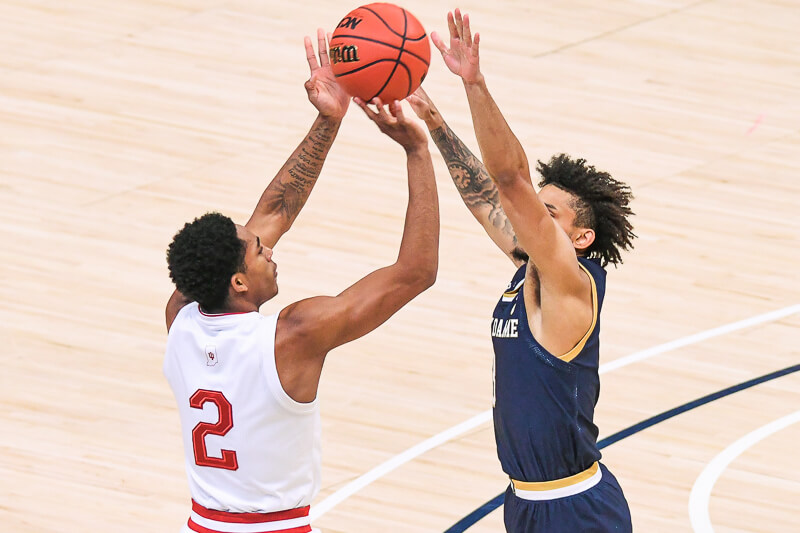 INDIANAPOLIS – Quick thoughts on a 62-60 win over Notre Dame:

How it happened: Indiana entered Saturday’s meeting with Notre Dame in the Crossroads Classic at Bankers Life Fieldhouse as just a 2.5-point favorite. And for a good portion of the afternoon, the Hoosiers looked like they would run the Fighting Irish right off of the floor. Indiana led by 17 points at 44-27 with 15:18 to go on a second-chance bucket by Trayce Jackson-Davis. But then the Hoosiers, who had a chance to put away the Fighting Irish, let them hang around. Notre Dame chipped away at the lead until it overtook the Hoosiers and led by as many as five. But that’s when Indiana’s freshmen made plays. Armaan Franklin splashed in a 3-pointer to cut Notre Dame’s lead to two with 2:49 to play. Trayce Jackson-Davis tied it on a dunk with a minute to go and then Franklin hit the game-winner, a 3-pointer from the left corner, with 15 seconds to go.

Standout performers: Joey Brunk, who became just the second player to play for two different programs in the Crossroads Classic, dominated Notre Dame at times in the paint. Brunk nearly had a double-double at halftime (eight points, 11 rebounds) and finished with nine points and 14 rebounds. Freshman Armaan Franklin, who entered the game 4-of-27 on 3s, splashed in a pair of triples in the first half and also made all three of his free throw attempts for nine points in eight minutes. The Cathedral product finished with 17 points, a career-best.

Statistics that stands out: Indiana avoided a 3-point outburst from Notre Dame as the Fighting Irish shot just 6-of-27 (22.2 percent) for the game. Indiana also won the points in the paint battle, 34-24.