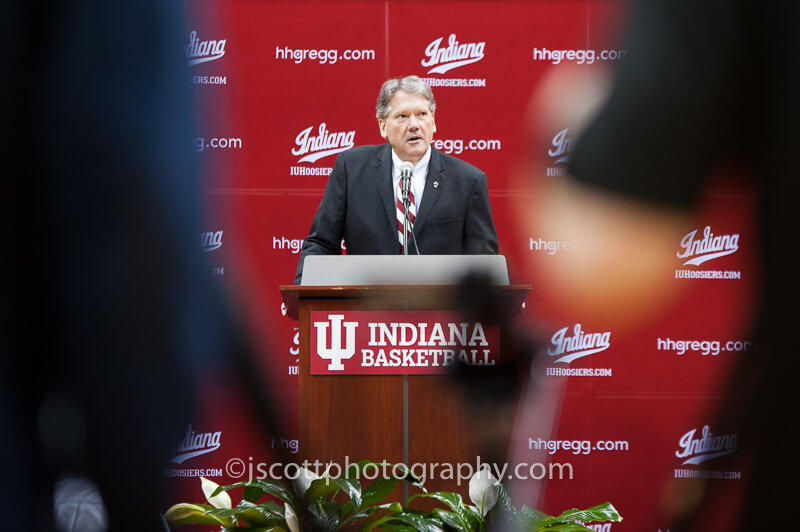 Indiana Athletics Director Fred Glass will retire at the end of the 2019-20 academic year, the school announced on Monday morning.

Here is the full release from IU:

BLOOMINGTON, Ind. – Vice President and Director of Intercollegiate Athletics Fred Glass announced today that he will be retiring from Indiana University as of the end of this academic year. Glass recently advised President McRobbie of his retirement plans to provide President McRobbie enough time to identify Glass’s successor.

“It’s time,” Glass said. “It’s an all-in, all-consuming role, and I’ve loved it, but I’m ready to step back and do something that keeps me closer to home with more time with my granddaughters and the rest of my family. I’ll finish up the Bicentennial Year and give President McRobbie enough time to select a great successor.”

“I want to congratulate Fred Glass on behalf of Indiana University and personally, on a superb tenure as Indiana University’s Vice President and Director of Intercollegiate Athletics. He has done an outstanding job in all areas of his portfolio and IU is seeing levels of accomplishment academically and athletically by its student athletes that rank with the best it has ever achieved. His legacy will be one of strong and competitive athletics programs and teams that play by the rules, a pervasive commitment to compliance and integrity, a commitment to excellent academic performance, record fund-raising and magnificent new or renovated facilities. He is also widely respected as one of the best athletics directors in the Big Ten, and has represented IU nationally with the greatest distinction. I wish him the very best in the next phase of his career, already filled with many notable achievements.”

“I feel like we’ve rebuilt IU Athletics both culturally and physically,” Glass said. “We have followed the rules. We are graduating our students at a record rate. Competitively, most of our programs are doing historically well, and the futures are bright for all of our sports. We are an athletic department nationally known for the holistic care and development of our students. We have had unprecedented success with fundraising and facility development. I thank all of the students, coaches, faculty, staff, donors, and fans who have made this such a wonderful experience for me, and especially President McRobbie for giving me this opportunity and being such an engaged and supportive leader.”

President McRobbie said he would announce very soon the members of a committee to be chaired by IU Vice President for Government Relations and Economic Engagement Bill Stephan to begin the search for Glass’ successor.

During Glass’s tenure, IU Athletics set records for both academic and athletic success, made historic and much-needed investments in facilities, delivered unprecedented fundraising dollars, and established nationally recognized programs and policies for student development and welfare.

While the accomplishments of IU Athletics under Glass through last year are summarized below, it is worth noting that the current year is also off to a great start. Football had: its best regular season in 26 years, tying for the third most wins in school history; its first winning Big Ten season in 26 years (and only sixth in the last 50 years); its first win over Nebraska in 60 years; its first national ranking in 25 years; the fifth Old Oaken Bucket in seven years; and just its fourth bowl game qualification in 25 years, but third in the last five years. Men’s Soccer, for the first time in 20 years, won both the regular season and tournament Big Ten Championships back to back, and Todd Yeagley (Glass’s first coach-hire) was once again named Big Ten Coach of the Year. Men’s and Women’s Cross Country, for only the second time ever (with just last year being the first), each finished in the nation’s top 20 at the NCAA Championships. Women’s Basketball at 10 – 1 has achieved its highest national ranking in program history, in part, by beating number five and 2017 national champion South Carolina. Men’s Basketball, led by Indiana Mr. Basketball and two-time Big Ten Freshman of the Week Trayce Jackson-Davis (the first back-to-back Mr. Basketball successfully recruited by IU in 21 years), is off to a strong 10 – 1 start. Men’s and Women’s Swimming and Diving are each nationally ranked, 4th and 16th respectively.

Academically, over Glass’s tenure, IU Athletics has set or tied records for its Graduation Success Rate seven consecutive years, with its most recent record of 91% representing a dramatic improvement over the 77% GSR score in 2011. Also during Glass’s tenure, IU Athletics has also set all-time records for Academic All-Big Ten honorees, Big Ten Distinguished Scholars, Academic Progress Rate, and teams with perfect single-year APR scores. Glass also oversaw the creation of the 25,800-square-foot D. Ames Shuel Academic Center in Memorial Stadium and led an unprecedented review of the Department’s academic metrics, processes, and procedures, believed to be the first and only of its kind in intercollegiate athletics.

Since Glass arrived in 2009, 23 teams and 195 individuals have won conference championships, 45 students have been named Big Ten Player of the Year in their respective sports, 588 students have earned All-American honors (including a school record 91 in 2017-18), three students have been named Big Ten Athlete of the Year (before Glass’s arrival it had been 19 years since an IU athlete had won the award), 24 coaches have been named Conference Coach of the Year, five coaches have been named National Coach of the Year, and the department has produced a National Team Championship, as well as 28 individual National Champions. Last year (2018-19) alone, for example: four programs won Big Ten Championships (the most in 27 years); IU won the Governor’s Cup, the all-sports competition with Purdue (which IU now leads 9-7-2 all-time); men’s soccer earned an NCAA record 20th trip to the College Cup and won both the regular season and tournament Big Ten titles; men’s swimming and diving won its third straight Big Ten title (its first three-peat in 34 years) and placed third at NCAAs (marking first time in 44 years its had back-to-back top three finishes); women’s swimming and diving won the Big Ten title and earned a program-record fifth consecutive top-10 finish at NCAAs; baseball won the Big Ten regular season title for the third time in seven years and a sixth NCAA berth in the last seven years (both Big Ten bests) and head coach Jeff Mercer was named Big Ten Coach of the Year (the first Big Ten coach in 37 years to win the Conference Championship in his debut season); softball had two wins against top ten teams for the first time ever and its own national ranking for the first time in 23 years; women’s basketball had it fourth consecutive 20-win season (a program record and only nine all-time); men’s basketball successfully recruited back-to-back Indiana Mr. Basketballs for the first time in 21 years; football secured its highest-rated recruiting class in school history, including the two highest rated individual recruits ever, a program record five four-star recruits, and four of the six highest-rated recruits from Indiana; men’s and women’s indoor and outdoor track and field teams each finished first or second at those four Big Ten Championship meets for the first time in 34 years; men’s and women’s cross country, for the first time ever, each finished in the nation’s top 20 at NCAAs; and rowing qualified for a school-record sixth straight top 15 national finish.

Glass has led a much-needed, quarter of a billion dollar effort to renovate and expand IU’s aging athletic facilities, all without any use of tuition contribution, student fee, or taxpayer money. With the openings this academic year of the Terry Tallen Indiana Football Complex, the Pfau Course at Indiana University, the Cross Country Course, and the Armstrong Stadium renovation, Glass will have completed the University’s ambitious Bicentennial Facilities Master Plan for IU Athletics which also included the Simon Skjodt Assembly Hall renovation, Mark Cuban Center for Sports Media and Technology, the Memorial Stadium South End Zone Excellence Academy, and Wilkinson Hall.

Glass has been a prodigious fundraiser, leading the effort to set six all-time annual fundraising records in the last nine years, secure 17 of the 18 largest gifts in IU Athletics history, and raise more than triple the funds in one million dollar-plus gifts than in the entire rest of the history of IU Athletics. IU Athletics will soon meet its record-shattering $215 million goal for the University’s Bicentennial Capital Campaign (which isn’t over until July of next year).

Glass has been known for his deep commitment to the wellness, security, and holistic development of the students under his charge. He established five priorities for the Department and its students, which were the hallmark of his tenure as athletic director: 1.) playing by the rules; 2.) being well in mind, body, and spirit; 3.) achieving academically; 4.) excelling athletically; 5.) integrating with the rest of the University. Building on these priorities, Glass subsequently unveiled a creed that represents Indiana University Athletics’ core values: The Spirit of Indiana: 24 Sports, One Team. To ensure that the Department meets the promise of The Spirit of Indiana, Glass established The Excellence Academy, one of the nation’s most innovative and comprehensive student personal development programs. As of last fall, the Excellence Academy program is housed in the new $48 million, 66,575-square foot Excellence Academy facility that encloses the south end of Memorial Stadium.

In 2014–building on the Department’s priorities, Spirit of Indiana, and Excellence Academy–Glass unveiled the Indiana University Student-Athlete Bill of Rights, a first of its kind, 10-point document that sets forth the Department’s commitment to students who participate in intercollegiate athletics during their time at IU and beyond. Glass also established the Spirit of Indiana Showcase, an annual awards gala celebrating our students’ top athletic and academic achievements as well as other talents. The Spirit of Indiana Director’s Award honors the senior male and female student who, on the whole, best personify the tenets of The Spirit of Indiana: 24 Sports, One Team. A leading advocate for sexual violence prevention, Glass established intercollegiate athletics’ most comprehensive Sexual Violence Disqualification Policy, which prohibits any individuals who have a documented record of sexual violence from participating in intercollegiate athletics for Indiana University.