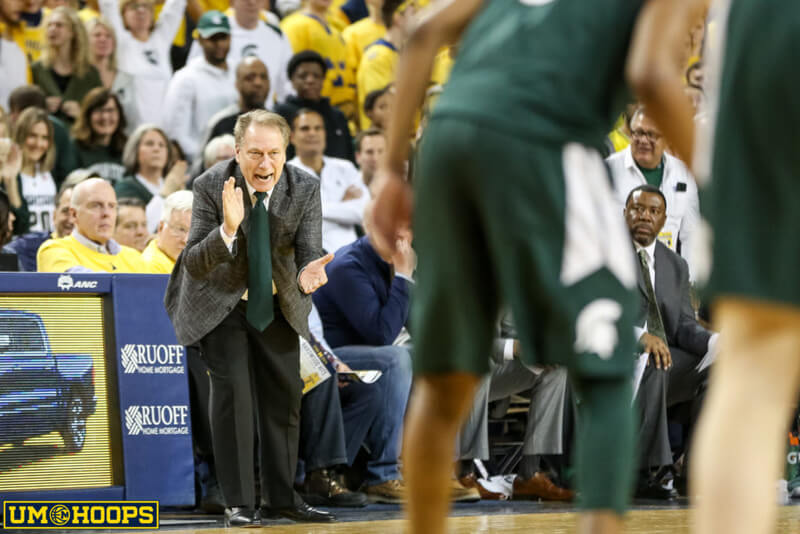 The fall semester will begin at most Big Ten campuses next month, but roster movement has continued across the conference since our last update in late May.

Here’s the latest on the rosters across the conference heading into the 2019-20 season. Current preseason Bart Torvik T-Rank ratings are in parenthesis for each team and teams are listed in order of their T-Rank.

(Note: This is the seventh post in a series that will be updated multiple times. In most instances, only scholarship players are included. If we missed anything, please email corrections to [email protected] or post in the comments.)

Notes: The Spartans were No. 1 in our last update in Bart Torvik’s ratings, but have fallen to No. 2 after Florida added Virginia Tech grad transfer Kerry Blackshear.

Notes: Maryland was No. 12 in the Torvik ratings in our last update, but have since moved up four spots into the top 10 at No. 8. There’s no denying the Terps will be one of the league’s most talented teams next winter.

Notes: Is Purdue really a top 10 team? There’s where they land in Torvik’s ratings and Matt Painter has earned the benefit of the doubt after last season’s run to the Elite Eight.

Notes: Illinois moved up from No. 16 to No. 13 since our last update and the Illini also had another roster move recently as Kane entered the transfer portal.

Notes: Ohio State at 18 seems low as the Buckeyes have one of the league’s best rosters and a coach who has proven himself capable of winning Big Ten games.

Notes: If Ohio State seems low at 18, Penn State at No. 20 seems way too high. Since our last update, the Nittany Lions added Jones, who began his career at IU.

Notes: Wisconsin returns a solid nucleus, but how will it replace Happ? It is a question that we will not be able to answer until the meat of the schedule arrives.

Notes: The Wolverines added a major piece earlier this month when Wagner, the younger brother of Moritz Wagner, committed to the program. He will likely be in the conversation for Big Ten freshman of the year under new coach Juwan Howard.

Notes: The Hawkeyes will have a solid one-two punch with Wieskamp and Garza, but if Bohannon is unable to play, it could be a long season in Iowa City.

Notes: Rutgers continues to move up the Big Ten hierarchy, but was dealt a significant blow when Omoruyi opted to transfer this offseason.

Notes: Can Indiana outplay the Torvik expectation? If not, it will be a fourth straight NCAA tournament miss for the Hoosiers.

Notes: The Gophers added a guard in mid-June when Greenlee, who is from Florida, committed to the program.

Notes: Nebraska has a tour to Italy scheduled for next month and the Huskers are going to need as a new coaching staff attempts to bring together a slew of new pieces.

Notes: It could be another tough season in Evanston as Northwestern will be projected by most to finish in the bottom two or three of the league.