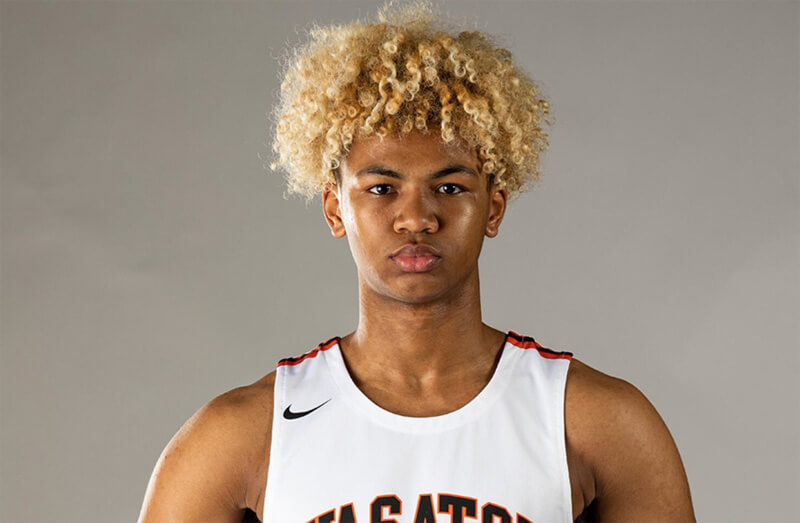 Class of 2020 Wasatch Academy (UT) guard Mike Saunders Jr. opened eyes this spring with his play for G3 Grind on the Under Armour Association circuit.

The Indianapolis native, who played at Lawrence North before transferring to Wasatch, recently added a scholarship offer from Cincinnati and was watched by Archie Miller during the lone April evaluation period.

Inside the Hall spoke at length with Saunders recently about his recruitment, his interest and relationship with Indiana and much more. Our full Q & A is available below:

On the first evaluation period and playing in front of coaches:

“It was a very good experience. I’ve done it in the past so it wasn’t anything new to me. I didn’t really pay attention to who was there because I feel like if I get caught up in who is there and who is not there, then that is going to affect my game. I think I had a pretty good weekend. I feel like it was very productive.”

On what he’s heard from Indiana and his relationship with the coaching staff:

“I’ve talked to Archie Miller one time. He seems like a very good guy and he’s shown a lot of interest in me. I’ve also talked to Bruiser Flint. He has a very good relationship with my father. IU has been showing interest lately.”

On the newest schools involved in his recruitment:

“My dad told me that Cal-Berkley has been showing interest. Also Arizona, BYU and Tennessee. Those are just interest at this point.”

On the experience of playing at Wasatch and the adjustment moving away from home:

“It was definitely a big adjustment because I was leaving my family for the first time. Not having my family around was a big change. And just coming from a public school to out here in the middle of nowhere. The school is in a small town with not a lot of people. It was a big change, but I feel like over time I matured. It’s a good environment.”

On whether it’s been helpful to be forced to focus on school and basketball at Wasatch:

“Definitely. Because there are no distractions or anything like that. And my head coach, Dave Evans, he puts you on a big stage. And the fact that traveled a lot across the country, it’s helped me boost my platform and helped a lot to be able to focus on basketball and school.”

On what he’s working on in the gym:

“Mostly just shooting consistently. Midrange and also the 3. Because I feel when I’m hot, I don’t miss. And when I’m cold, it might take a little bit of time to get going. I like to shoot when I’m tired so that when I’m in a game and I’m tired, it’s natural to me to stay in the same motion and stay locked in.”

On his plans for the rest of the summer:

“School ends May 25, I believe. I’ll home at the end of May and the beginning of June, I think, for some time. And then I’ll come back here as we have some team camp at some colleges on the west coast. And then mostly in July and August, I’m home.”

On the connection that brought him to Wasatch:

“Coach Evans is really close with George Hill. And that’s my god brother. And at the time when I was in eighth grade or a freshman, coach Evans was at a school called Lone Peak. Nobody really knows that, but I was actually looking at that school before I went to Lawrence North, but at the time, I felt like I was too young. But then after my sophomore year, coach Evans got in touch and told us he was getting the job at Wasatch and laid out the plan and just told me how the season would be. Basically it was my decision and it was all up to me and I chose to come here.”

On whether he wants to get back to the midwest for college:

“I’m open to go anywhere. Honestly, I don’t see myself going to a certain location. I’ll pick the best fit for me. I don’t think it matters regionally where I go.”

On IU as a program and his thoughts on the program’s stature in the state:

“I’ve been to a couple of Indiana games and I can just tell that everybody in the area is a diehard fan. A lot of the fans are so supportive of the team whether they’re doing good or bad. They’re always going to be behind them. I really like that aspect of Indiana. And the fact that it is home. I wouldn’t mind coming back home. It’s a very good atmosphere. I’ve always liked the basketball there.”