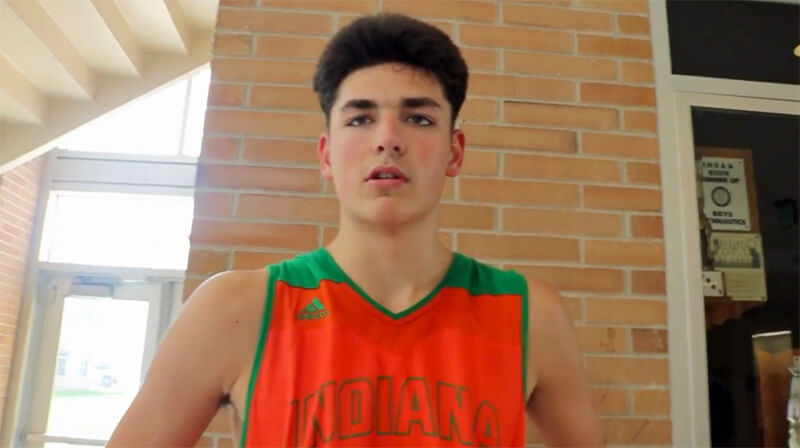 Class of 2020 Culver Academies guard Trey Galloway added a scholarship offer from Indiana on Monday afternoon during an in-home visit with the coaching staff.

Inside the Hall spoke with Galloway earlier this evening about the offer, another in-home visit he had on Monday, his recruitment at-large and more.

On today’s in-home visit and what it meant to get the scholarship offer from the IU staff:

“It meant a lot to me just knowing that after the tournament (over the weekend) and the quick turnaround, they got up here this afternoon. It meant a lot knowing what they want their program to be and just being from Indiana.”

On the timing of the offer following the evaluation period:

“They don’t just give out scholarships to anybody. You’ve got to earn it. It’s not like they’re going around offering everybody. They like to take time with the process and just see who they really want and who they think will fit in to their program. They want guys who can take that responsibility of playing at Indiana. I think coach (Archie) Miller just wanted to see a little bit more this spring. I was unhealthy last year in the spring a little bit. So this was a good year for me. They got to see me healthy.”

On the significance of getting an IU offer as a kid from Indiana:

“I wasn’t an Indiana fan growing up, to be honest. But it’s a big deal. Obviously there are a lot of people behind me that are Indiana fans that would like to see me go there. It means a lot for them to give me an offer and it shows that I’ve been working hard. I wouldn’t say it’s any more significant that any other schools, but I’m just going to see what I want, keep looking around and see what the best fit is for me.”

On today’s visit with Michigan:

“Coach (John) Beilein and two of his assistants were in today. It was good. I was lifting and they watched me and then watched me workout after a little bit. And we went to dinner together and just talked through some things. This past weekend was coach Beilein’s first time seeing me play. He didn’t really see me play before and he liked what he saw so that is why he wanted to get down here really quick to start talking to me and tell me they want to start to recruit me. They’re not going to offer obviously right now because he’s only seen me play once, but he wants to keep recruiting me because he thinks I’m a good player. They definitely want to get me back on campus and get me around campus to see some things in their program.”

On the schools he’s hearing from the most other than IU or Michigan:

“I’m hearing from Notre Dame a lot. Purdue, Michigan State, Cincinnati’s been talking to me. California has picked it up. Butler and Iowa. Those are the main schools off the top of my head right now.”

On what he’s looking for in a school:

On what he likes about the IU staff:

“Just from analyzing them and watching them at the games … I went to two games this season and they want to win, too. That’s one thing they recognize with me is my competitiveness. I recognize that with them, too. They want to win games. They struggled a little this year, but that was killing them … they know they’re rebuilding but they want to win games as soon as possible. That’s one thing I noticed is I feel like they’re starting to create that family bond with their guys. I talk to coach (Tom) Ostrom the most. He texts me a good amount. That’s one thing that me and him kind of connect with and text each other and also getting to know coach Miller is good.”

On the changes to this year’s recruiting calendar and whether he felt any extra urgency this past weekend to play well with it being the lone April evaluation period:

On the scholarship offer to Anthony Leal, playing with him for Indiana Elite and whether they could play together in college:

“I’ve known him for a while. We’ve definitely created a bond. We’ve gotten to know each other over the years. We haven’t really talked about (college) much, but I could definitely see myself playing with him somewhere. It would be cool to maybe team up in college, but we really haven’t talked about it much.”