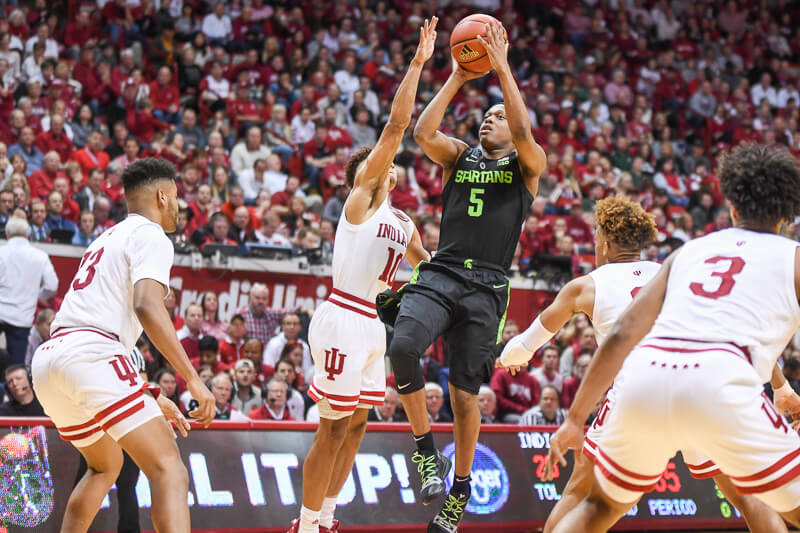 Big Ten rosters are still in flux with the addition of late 2019 signees and graduate transfers, but several key NBA decisions are already out of the way.

Periodically throughout the offseason, we’ll be publishing Big Ten power rankings as we try to forecast what the league will look like in 2019-20.

14. Northwestern – Remember when the Wildcats were America’s team back in the 2017 NCAA tournament? Those days feel like a distant memory.

If Chris Collins deserves credit for guiding Northwestern to its first and lone NCAA tournament appearance back in 2017, he has to also take the blame for the program cratering the past two seasons.

Collins shouldn’t be in any real danger of losing his job, but right now it is hard to see the Wildcats finishing anywhere other than the bottom four of the league next season. Vic Law, Dererk Pardon and Ryan Taylor are all gone and the talent level needs a significant upgrade in Evanston.

13. Nebraska – Fred Hoiberg replaces Tim Miles and while the Huskers had a fair amount of talent last season, most of it has departed Lincoln.

In time, Hoiberg will recruit his fair share of transfers to Nebraska and attempt to follow the same blueprint he laid out during his time at Iowa State.

Next season, however, looks bleak. Glynn Watson, James Palmer Jr., Isaac Copeland and Isaiah Roby are all gone and it’s hard to imagine the Huskers adding enough between now and the fall to make up for those departures.

12. Penn State – If, and it is a big if, Lamar Stevens decided to return to State College, we’ll be moving the Nittany Lions up this list.

But right now, we’re operating under the assumption that Stevens won’t be back as his name is currently on the NBA draft early entry list and he’s coming off of a very productive junior season. Josh Reaves is also gone and Rasir Bolton recently entered his name into the NCAA’s transfer portal.

Pat Chambers still hasn’t made the NCAA tournament in State College and he’s entering his ninth season at the helm. Might this be his final season on the job?

11. Minnesota – This is another situation where a significant NBA draft decision could alter our outlook going into next season.

In the case of the Gophers, it’s the decision of junior Amir Coffey, who is one of the league’s most versatile wing players. If Coffey does decide to come back, it would be a major win for Richard Pitino.

If, however, he remains in the draft, losing Coffey, Jordan Murphy and Dupree McBrayer is a lot to stomach.

10. Rutgers – Slowly but surely, Steve Pikiell is helping Rutgers climb the ladder in the Big Ten.

The Scarlet Knights are likely to return every notable piece for this past season’s group that won seven league games.

Rutgers still has plenty of growth to do offensively, but the Scarlet Knights have improved every season under Pikiell and we expect another move up the standings in 2019-20.

9. Indiana – Archie Miller enters season three at the helm in Bloomington and there will be significant pressure to reach the NCAA tournament.

IU missed the postseason completely in Miller’s first season and then reached the NIT in 2018-19. To show progress, the next step is getting back to the big dance, which hasn’t happened since 2016.

Romeo Langford and Juwan Morgan are both gone, but IU returns a solid nucleus and the Hoosiers also welcome Trayce Jackson-Davis, the lone McDonald’s All-American to sign with a Big Ten program.

8. Wisconsin – For the first time in his tenure as Wisconsin’s head coach, Greg Gard will enter a season without Ethan Happ on the roster.

While he may not go on to play in the NBA, the Badgers can’t replace one of the most productive players in program history.

Wisconsin will look much different next season, but we still like several of the pieces on this roster, including D’Mitrik Trice, Brad Davison, Nate Reuvers and Kobe King.

7. Iowa – The Hawkeyes have a real shot to outperform our current expectations as everyone notable is expected to return with the exception of Tyler Cook.

Overall, this is still one of the league’s deepest rosters and it could be even deeper as two sit out redshirts become eligible (Jack Nunge, CJ Fredrick) and Pat McCaffery, a top 100 recruit, also joins the program.

However, there are still reasons for concern as Iowa’s defense was once again abysmal last season in conference play.

6. Purdue – After losing four starters entering last season, the narrative was that Purdue would take a major step backward. It didn’t happen.

The Boilermakers grabbed a share of the Big Ten regular season title and were a Virginia miracle away from a Final Four appearance.

Carsen Edwards will be gone as will Ryan Cline, but there is young talent in West Lafayette and the Boilermakers also just landed a key grad transfer in Jahaad Proctor. Matt Painter has built a winning culture at Purdue and at this point, it would be foolish to bet against another productive season for the Boilermakers.

5. Illinois – The Fighting Illini got a major boost when potential all-conference guard Ayo Dosunmu opted to return to school without even testing the NBA draft process.

Giorgi Bezhanishvili and Trent Frazier are also back and the Illini welcome a top 50 recruit in Kofi Cockburn to further solidify the frontcourt.

It was a rocky start for Brad Underwood in his first two seasons in Champaign, but Illinois seems to be headed in the right direction.

4. Maryland – The Terps are another school that received a major boost from a freshman’s decision to skip the NBA draft process altogether.

In this case, Jalen “Sticks” Smith is returning to College Park and assuming Anthony Cowan joins him, Maryland looks like an NCAA tournament team once again.

Bruno Fernando is gone, but Maryland has a very strong young core in Aaron Wiggins, Eric Ayala and Darryl Morsell and a solid incoming recruiting class as well.

3. Ohio State – Assuming Kaleb Wesson returns, which seems likely, the Buckeyes will be able to pair a strong group of returnees with the league’s best recruiting class.

Considering the overachieving that Chris Holtmann did in his first two seasons in Columbus, we’re buying a move up in the standings in year three for the Buckeyes.

Freshman point guard D.J. Carton should be productive immediately and there’s still plenty of room for growth for Wesson, who was one of the league’s best post players last season.

2. Michigan – We still don’t know how Michigan will finish out its recruiting for 2019, but the Wolverines appear to be involved with William and Mary grad transfer Justin Pierce and German Franz Wagner, the younger brother of Moritz Wagner.

Yes, Michigan is losing Jordan Poole, Charles Matthews and Ignas Brazdeikis, but Zavier Simpson, Jon Teske and Isaiah Livers are all back. Freshman wing Jalen Wilson should help immediately and the track record of John Beilein speaks for itself. Until proven otherwise, pencil in Michigan as a Big Ten contender.

1. Michigan State – The return of Cassius Winston installs the Spartans as the clear favorite to win the Big Ten next season.

Michigan State is coming off a Final Four appearance and is also hopeful that Joshua Langford will be helpful next season. The Spartans also welcome back Aaron Henry and Xavier Tillman, but the key is clearly Winston.

If he can repeat as Big Ten player of the year – which doesn’t seem unrealistic at all – it should be another special season in East Lansing.