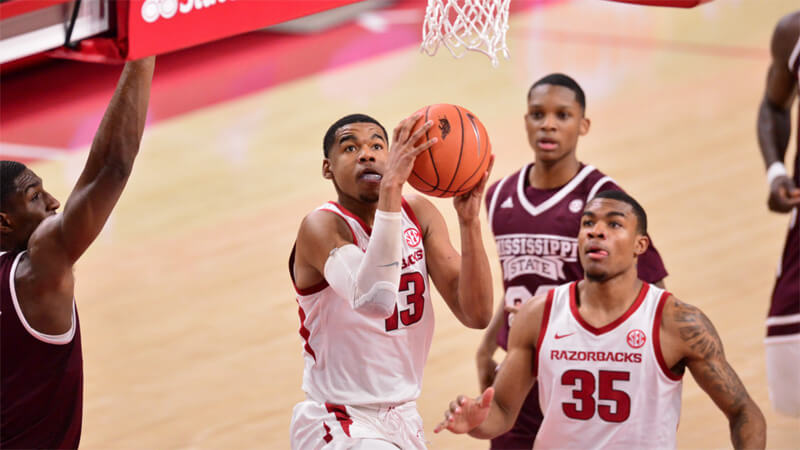 Indiana and Arkansas will meet for the second time this season on Saturday afternoon at Simon Skjodt Assembly Hall. The Hoosiers and Razorbacks both comfortably won their first round games in the National Invitation tournament (NIT) on Tuesday. Arkansas won the first meeting this season between the two teams, 73-72, in Fayetteville.

Saturday’s game will air on ESPN at 12 p.m. ET with Dave Feldman and Dan Dakich on the call:

Indiana and Arkansas will look much different when facing off for the second time this season on Saturday afternoon.

The Razorbacks will be without their star, Daniel Gafford, and the status of IU freshman guard Romeo Langford remains up in the air after he injured his back in the Big Ten tournament in Chicago.

Gafford, who torched IU for 27 points, 12 rebounds and three blocks in the first matchup back in November, is entering the NBA draft and thus, skipping the NIT.

Langford’s situation isn’t as clearcut as the future lottery pick said in the aftermath of IU’s Big Ten tournament loss that he intended to play in the NIT, but missed Tuesday’s game against Saint Francis (Pa.). If Langford isn’t 100 percent healthy, there’s no reason for him to risk further injury to play in the NIT.

Regardless of the status of Langford, the show will go on Saturday for both teams and as is typically the case in the NIT, the more motivated and hungry team will advance to the quarterfinals.

THE FIRST MATCHUP AND THE PERSONNEL

The two major stories from the first meeting between Indiana and Arkansas was Gafford and the inability to take care of the ball by the Hoosiers.

Gafford won’t be a problem on Saturday, but Arkansas will still roll out its signature ball pressure. The Razorbacks forced Indiana into 18 turnovers back in November for a turnover percentage of 23.7.

Freshman guard Isaiah Joe is second on the team in scoring at 13.9 points per game and scored 13 points against IU in November, but shot just 3-for-11 on 3s.

Sophomore Mason Jones has fallen out of the starting lineup over the last seven games, but he’s still a huge key to the success of Arkansas. The Oklahoma native scored a team-high 18 points in the NIT opener at Providence and hit four of his six 3-point attempts. Jones is shooting 37 percent on 3s this season and is capable of getting hot at anytime.

Junior guard Jalen Harris had the seventh best assist rate in the SEC this season, but is shooting a woeful 11.9 percent on 3s on 67 attempts.

With Gafford out, Arkansas will rely on sophomore Gabe Osabuohien and freshman Reggie Chaney inside. Both players are coming off stellar performances against Providence. Osabuohien had 11 points and eight rebounds while Chaney came off the bench and went for 14 points, five rebounds and seven blocks.

The Arkansas statistical profile has one major strength and two major weaknesses.

The strength is the ability of the Razorbacks to force turnovers. Arkansas ranks 15th in the country in opponent turnover percentage at 18.4.

Arkansas, however, is one of the four worst defensive rebounding teams in the country and is in the bottom 25 in opponent free throw rate. Are those two areas Indiana can successfully expose?

The Hoosiers are just 325th nationally in free throw percentage, which is a clear weakness, and Indiana is middle of the pack in offensive rebounding. With Gafford out, there could be even more opportunities for second chance points for IU, but will the Hoosiers be able to capitalize?

Arkansas does excel at drawing fouls and getting to the free throw line and it also plays at one of the faster tempos in the country (70.4 possessions per game).

Attendance will be interesting to watch on Saturday. After drawing only 5,431 fans for Saint Francis (Pa.) on Tuesday, there’s a lot going on in both Bloomington, around the state and the country on Saturday. Little 500 qualifications are taking place Saturday, the IHSAA basketball state finals are taking place at Bankers Life Fieldhouse and of course, the NCAA tournament is also being played at various sites across the country.

Given how sharp Arkansas was in its 12-point win at Providence on Tuesday, Indiana won’t be able to afford the lackluster effort it had in the first half against Saint Francis (Pa.) if it hopes to advance. Arkansas has won four of its last five and looked motivated against the Friars to prove it could still be successful without Gafford.

If Indiana beats Arkansas, it would face either Wichita State or Clemson next Tuesday or Wednesday in Bloomington. If the Hoosiers lose, another long offseason will begin for Hoosier Nation.