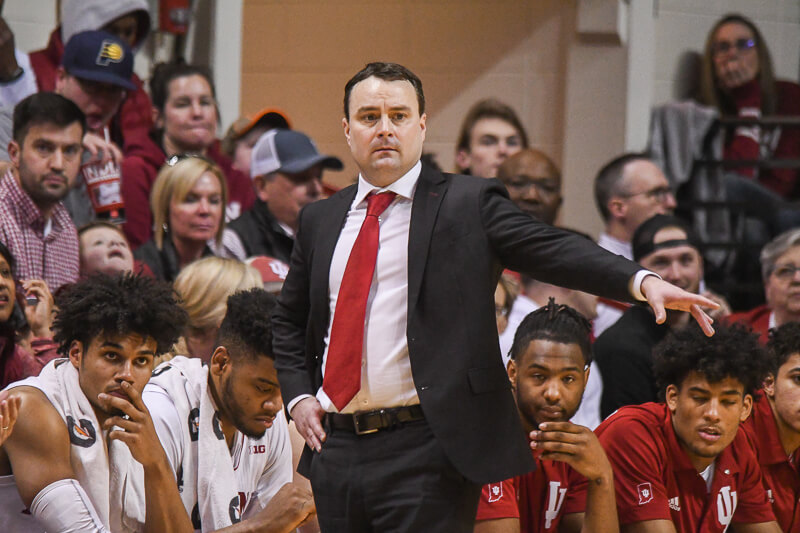 In advance of this week’s Big Ten tournament in Chicago, the league held a conference call on Monday morning featuring all 14 coaches.

Here are quotes from what Archie Miller had to say on the call:

“We just had, obviously, a really good week for our team playing against two teams that have really, really improved throughout the course of the season and made our league as deep, if not the deepest, league in the country in Illinois and Rutgers. I thought our guys did a really nice job this week of just staying in the moment and continuing to just kind of focus on the daily approach, which is sort of how we had to navigate a very, very tough January and February. But to their credit, our attitude is great. We’re playing a lot like maybe our staff thought we could envision us playing our best basketball at some point in time. We have a good vibe and we’re really excited to go to Chicago. The Big Ten tournament should be something that is probably going to be one of the most entertaining and competitive tournaments in the country just due to the fact that I know sort of how the teams from the top to the bottom are playing right now. There’s very few teams that are there that aren’t capable of winning multiple games. So I’ll leave it at that.”

On how IU will prepare for Ohio State and the status of Kaleb Wesson:

“He’s going to play. We’ll just assume and prep for them having him there. If he’s not there, obviously, that is what it is, but we’ll prepare to have him there. We had just really a fight the last time we played them at our place. They were able to come out on top and make some real key plays late. I thought it was a really, really tough game to play in and I expect the same thing. They’re a very, very good team. When you take a player of that caliber off the floor, things obviously change. We’ve dealt with it all season long. One guy can make a world of difference and he’s obviously a very big cog. They’re terrific on defense, they’re an NCAA tournament team and at the end of the day for us, we just have to continue to prepare, get better and find a way to keep playing as well as we can.”

On being able to rebound from a tough stretch and play well in recent weeks:

“I think the big thing is just focusing on our attitude. So many times when you have ups and downs, the attitudes are masked by winning. When you’re losing, everything stands out. For us to be able to find a way to make the best out of our situation was to correct our attitude as a team. And part of that starts with the staff being willing to embrace guys, make them better and challenge them. At the same time, you really can’t have any slippage in certain areas when you don’t have a lot of room for error. I think we’ve got some guys right now with great attitudes again. Our practice habits have been as good as any here in the last three to four weeks and that’s why we’ve gotten better and played very competitively against anyone that we’ve played with. I think at the end of the day, one win or two wins as everyone knows in this business, it sort of lifts the cloud over you and you feel a little bit better. For our guys to be able to experience some wins down the stretch after some of the just really, really tough games that we’ve played in that could have went either way, it’s just a good thing. Confidence is such an amazing thing to watch it come and go. And I think our team right now has as much confidence as we’ve had all season in each other.”

On whether this is the team that IU envisioned having at the beginning of the season:

“Yeah. You know what, every coach probably sets out at the start of a season. And you say to yourself, we have the ability to do A, B and C. And for us it was going to be a mesh of a lot of new guys, five freshmen and a grad transfer with our second year returners, one senior, two seniors being really Zach (McRoberts) and Juwan (Morgan) and then obviously our, our other guys being, you know, sophomores and juniors, you know, how are we going to mesh these guys? But I think in the front end we thought we had a deeper team. I think we had a group that we felt like we could play really hard and play a lot of different types of combinations of people. And that got derailed from day one. You know, we just, we had season ending injuries, we’ve had concussions, we’ve had suspensions, we’ve had a lot of things where it just hasn’t been able to get that chemistry. A big part of it was just having four or five guys out of practice for months. The wear and tear of our depth just wasn’t there. And the last four weeks, Race Thompson’s come back and to his credit, what an incredible story it’s been for him to be able to help us at the end of the year. De’Ron (Davis) missing most of January really hurt us and he’s back. All of a sudden, you know, you have another guy in there and then, you’re able to get McRoberts in there a little bit more in practice. We just became a deeper team here late and we had some more guys, I think that we’re getting in the game which helps your morale a little bit. But without question, if you watched us play here in the last three or four weeks, you’d say that team, right there is playing hard. They look like a good team. At the end of the year that’s all you hope for. You make the best out of everything. A negative can always be made into a positive. And some of what we’ve walked through, you know, has made us a tougher group. It’s made us a more together group and guys want to come to the building and work out in practice and get extra lifts in, you know you’re doing something right as a unit, you know, you’re feeling good about your situation. So that’s where we’re at. Hopefully it carries over a little bit more here.”

On Ohio State and what’s different about them since the last time the teams met:

“We have to kind of dive in. I mean, you’re immersed with your current deal and we obviously just finished yesterday as they did. So I’m sure we’re all regrouping and trying to figure out what’s happened in the last month. Obviously not having Kaleb play in the last three games is a disadvantage. They’re not the same team. We’re preparing obviously for him to play. So we look back on our first game and then sort of when he was playing since our game to see what they’re doing and what they did. The big thing is, you know, each team kind of prepares to play against the other team in a certain way. And I think those guys chose in the first game to know really pack the paint, defend certain guys, they trapped the post. They did a great job there and we just had a really hard time scoring the ball in that game. It was very difficult. We know making a couple shots late, which ages gave us a little bit of breathing room but you know, give them credit. They finished the game better than we did. And defensively, we’re going to have to be a lot better than we did in our last two games. And I think it’s just evaluating yourself. Our last couple games defensively we haven’t been as tough and we’re going to have to really, really be better in a couple areas as we go to Chicago. So we’ll focus on ourselves on that. But the big thing for us is, you know, when you’re playing in a team like that is you’re going to have to be tough minded group. You can’t give up second shots and you can’t get rattled, go through the course of the game if you’re not scoring. They’re a great defensive team. You have to be able to hang your hat on, staying with it and kind of doing the next thing. But we’re obviously going to have to really dig in an  and look at game one and we’re going to have to really dig in and see… They’ve obviously progressed since we played them. We’re a different team than we were the day we played them and I’m sure they’re different in many ways, but the current state of our group, I think we’re excited to play. That’s the one positive.”