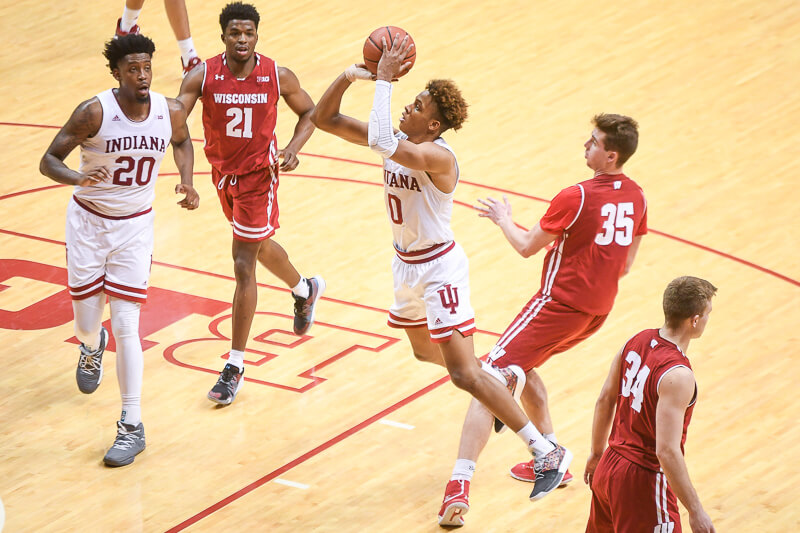 Indiana snapped its five-game losing streak on Tuesday night with a 75-73 double overtime win over Wisconsin at Simon Skjodt Assembly Hall. The win improved the Hoosiers to 14-14 overall and 5-12 in the Big Ten.

Here’s a look at five takeaways from the win over the Badgers:

That was the word Romeo Langford used to describe his feeling about the layup he made with .8 seconds remaining in double overtime to sink Wisconsin on Tuesday.

Langford had been in position to make game winning shots on a couple of occasions this season for the Hoosiers, but came up short. On both of those occasions (at Michigan State and at Iowa), Langford settled for step back jump shots.

This time, there was no settling. Langford attacked the basket with a full head of steam. And once he got his shoulder past Khalil Iverson, it was clear he would not be denied.

“Rob (Phinisee) came up to set the screen, and they messed up the read on it,” Langford said. “I just saw a lane to get to the basket, and that’s just what I did.”

The Hoosiers hit 6 of their 14 3-point attempts in the first half and four different players connected from distance. Al Durham Jr. hit 3-of-4 and Langford, Phinisee and Devonte Green each hit a triple. It was quite a performance for a team that came in as the league’s worst perimeter shooting team.

The stellar shooting didn’t continue in the game’s final 30 minutes as Indiana missed all six of its attempts from distance down the stretch, but the Hoosiers wouldn’t have built their lead without that first half performance.

· A balanced effort offensively: The Hoosiers managed just .96 points per possession in Tuesday’s win, which isn’t a particularly strong number, but they did it with balance.

Langford led the way with a team-high 22 points, but three other Hoosiers finished in double figures. Justin Smith bounced back from a tough performance at Iowa with 12 points while Durham and Phinisee added 11 points each.

Juwan Morgan had just nine points on 3-for-12 shooting, but he did grab five offensive rebounds.

Indiana has been too reliant on Langford and Morgan all season to carry the load offensively, but that wasn’t the case in the win over the Badgers. If the Hoosiers want to carry this momentum forward in the season’s final three games, they’ll need continued balance offensively to do so.

· Defense hitting its stride: As Jerod Morris pointed out this morning on Twitter, Indiana’s defense has been a major strength over its last three games.

Since the Minnesota loss, the Hoosiers own the nation’s sixth best adjusted defensive efficiency, per Bart Torvik’s ratings. IU’s last three opponents have shot a combined 19-for-77 against the Hoosiers on 3s. Indiana is now eighth in the conference at 1.03 points per possession allowed with just three regular season games to go.

Whether that can hold up remains to be seen, but it won’t take long to get an answer. Michigan State, which owns the league’s best offense, comes to Bloomington on Saturday.

· Race Thompson looks like a valuable piece for the future: Race Thompson hasn’t been a factor nearly all season for the Hoosiers as he recovered from a concussion, but the redshirt freshman is finally healthy and is making his mark.

Thompson’s offensive game has a long way to go, but he’s made solid contributions the last two games with his defense and rebounding.

His work in the post defensively against Ethan Happ was impressive on Tuesday and he also grabbed seven rebounds in a career-high 22 minutes.

“He’s got more physicality than we’re accustomed to,” Archie Miller said. “He can bang. He can mix it up a little bit. The other thing is, he’s a really good rebounder per minute. He’s rebounding the ball on both ends of the floor for us in his minutes that he’s given. He’s been able to do that. So that’s a big step for him to come in.”