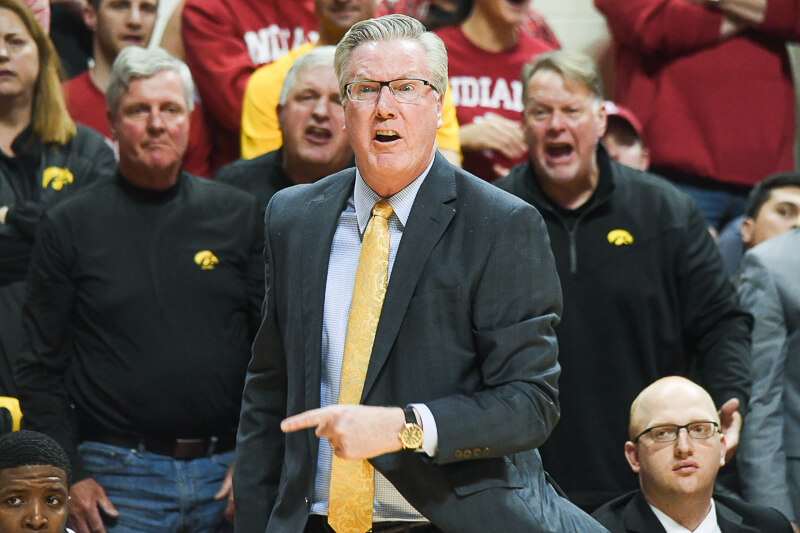 Indiana will look to avoid falling further down the Big Ten standings on Friday night as the Hoosiers travel to Carver-Hawkeye Arena to take on Iowa. The Hawkeyes are 20-6 and 9-6 in the Big Ten.

Tonight’s game will be broadcast at 9 p.m. ET on FS1 with Dave Revsine and Andy Katz on the call:

Just 15 days after meeting in Bloomington, Indiana and Iowa will meet again on Friday night in Iowa City.

In the first meeting, Indiana’s postseason hopes were still alive as the Hoosiers had just come off of a win over Michigan State in the Breslin Center. However, Indiana hasn’t won a game since that victory in East Lansing and won’t be favored again until the regular season finale against Rutgers in Bloomington.

Iowa, meanwhile, is a rock solid NCAA tournament team with four wins in its last five contests. The Hawkeyes are coming off of a tough 66-65 loss at home to Maryland after winning two straight games in dramatic fashion over Northwestern and Rutgers.

Three Hawkeyes did most of the damage against IU in the first meeting at Simon Skjodt Assembly Hall.

Freshman Joe Wieskamp got comfortable from the perimeter early and splashed in all four of his 3-point attempts before halftime. Junior big man Tyler Cook was also a major problem for Indiana as he scored 13 of his 21 points in the first half as the Hawkeyes built a 10-point lead.

The hero of the game, however, was junior Jordan Bohannon, who hit some dagger 3-pointers late on his way to a game-high 25 points in Iowa’s 77-72 win. Bohannon, one of the league’s best point guards, had a mostly quiet first half, but exploded for 19 after intermission.

In many ways, the first meeting was a classic case of Indiana’s inability to sustain momentum offensively over the course of a game. After racing to a four-point lead and scoring 15 points in the first five minutes of the game, the Hoosiers scored just 21 over the final 14:33 of the first half against the Big Ten’s worst defense.

Iowa, meanwhile, rode the hot 3-point shooting of Wieskamp and Bohannon and the stellar post play of Cook to take the Indiana crowd out of the game. After trailing by 10 at the half, Indiana got no closer than three in the game’s final 20 minutes. 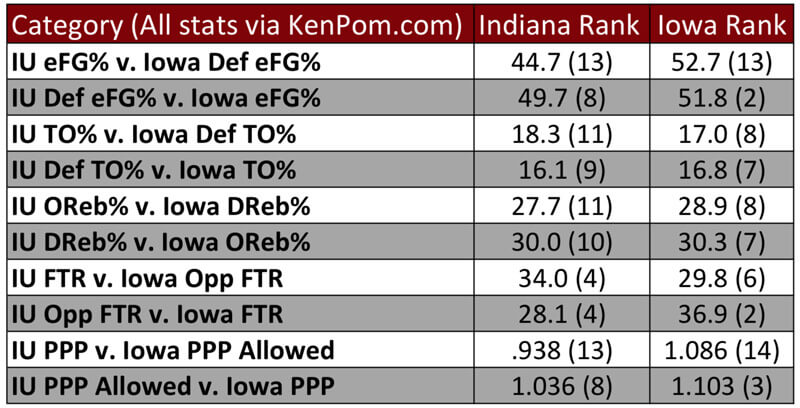 Iowa is an elite offensive team and below average defensively. In fact, Iowa hasn’t done much to fix its putrid defense from a season ago, but it hasn’t mattered because the Hawkeyes can put points on the board in an efficient manner.

The strength of Iowa’s offense lies with 3-point shooting – 38.1 percent in Big Ten games – and an ability to get to the foul line. The Hawkeyes are second in the conference in free throw rate (FTA/FGA) at 36.9 percent and are converting at a 75.8 percent clip from the stripe in league games.

Indiana took far too many 3-pointers against Purdue in Tuesday’s loss and can’t afford to have the same thing happen tonight in Iowa City. The Hawkeyes are allowing Big Ten foes to shoot close to 55 percent on 2s in league play, which is the worst in the conference.

The Vegas line as of Friday morning favors Iowa by seven and KenPom concurs with a prediction of the Hawkeyes by seven. The Sagarin ratings like Iowa by five.

Iowa has three Big Ten home losses this season  – Wisconsin, Michigan State and Maryland – but closes out its home schedule with two of the worst teams in the standings in Indiana and Rutgers.

As we’ve seen throughout this season, it’s hard to know what to expect from Indiana on a game-to-game basis. The Hoosiers handed Michigan State its only home loss of the season earlier in the month, but in their most recent road game, laid an egg in Minnesota. It’s fair to wonder if a letdown is coming after Tuesday’s hard fought loss to Purdue in Bloomington and the reality of this season’s outcome taking grip.