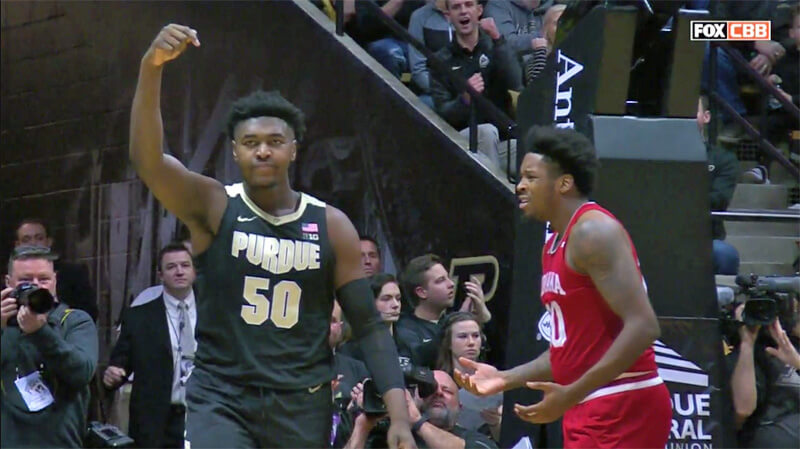 Indiana will look to avoid a fifth straight loss at home on Tuesday night as the Hoosiers welcome rival Purdue to Simon Skjodt Assembly Hall.

The Boilermakers are 18-7 overall and 11-3 in the Big Ten. Tuesday’s game will tip at 7 p.m. ET on ESPN2 with Jason Benetti, Dan Dakich and Molly McGrath on the call:

That’s the best way to describe the two rivals, separated by a little over 100 miles, who will meet on Tuesday in Bloomington.

Purdue, despite graduating four starters from last season’s team, is a legitimate contender to win the regular season Big Ten championship. Matt Painter would be the pick for Big Ten coach of the year if the season ended today and Carsen Edwards is a legitimate All-America candidate. More importantly, the leadership of Painter and Edwards has guided Purdue’s complementary pieces into roles conducive to success.

Indiana, meanwhile, is lacking in every key area. Archie Miller and the coaching staff are failing to get through to the players. The players, in their most recent effort, delivered a complete stinker at the Barn in Minneapolis. The appetite from the fanbase to watch this team play is dwindling. It’s been a stunning collapse for a team that was once 12-2 and ranked as high as No. 21 in the Associated Press top 25 poll.

But the game must go on and there is, at least on paper, plenty to play for on both sides. Purdue, which is still in the thick of the Big Ten title race, needs to win to keep pace with Michigan State and Michigan. And Indiana, its NCAA tournament hopes dashed, has pride on the line.

Purdue easily won the first matchup between the two teams back on Jan. 19 in West Lafayette.

Despite shooting just 7-for-22 from behind the 3-point line, the Boilermakers rode a balanced scoring attack to a comfortable 70-55 victory.

Edwards was just 6-for-18 from the field, but dished out a game-high seven assists in 38 minutes. Sophomore Nojel Eastern was a difference maker as he posted a double-double (10 points, 10 rebounds). And the inside duo of Matt Haarms and Trevion Williams combined for 20 points, eight rebounds, five assists and four blocked shots while shooting 9-for-11 from the field.

Indiana, meanwhile, was a mess offensively. The Hoosiers couldn’t establish Romeo Langford, who finished with a season-low four points. The leading scorer in West Lafayette for IU was Justin Smith, who was 7-for-8 from the field for 15 points, but committed four turnovers.

Besides Saturday’s loss at Minnesota and the Big Ten-ACC Challenge loss at Duke, Indiana’s performance at Purdue was probably its third worst of the season on the road.

Purdue owns the Big Ten’s best offense and if the Boilermakers are hitting perimeter shots, they can be near impossible to slow down.

Purdue ranks third in league play in 3-point shooting at 38.1 percent and also does a terrific job of taking care of the ball. The Boilermakers are turning it over on just 15.9 percent of their possessions in league play.

Offensive rebounding is also a major strength for Purdue as the Boilermakers are grabbing 33.9 percent of their missed shots in conference play. Defensive rebounding has been an issue at times for Indiana and the Hoosiers simply can’t afford to allow Purdue second-chance opportunities and expect to win.

The KenPom projection is Purdue by four and Sagarin concurs as his ratings also predict a four-point Boilermaker win. The Vegas line won’t be released until late Monday afternoon.

Indiana’s last two home games came down to the final minutes, but poor late game execution in both instances ultimately foiled any chance at victory. Purdue is better than both Iowa and Ohio State, so if Indiana doesn’t come out with more focus, this contest could get out of hand in a hurry.

What was once a promising Indiana season has spiraled out of control with 10 losses in 11 tries. Archie Miller noted that the Hoosiers need to make “drastic changes” in the aftermath of Saturday’s debacle at Minnesota, but it is unclear what that will entail. With its offense broken and its home court advantage gone, will Indiana get off the mat and fight on Tuesday night?