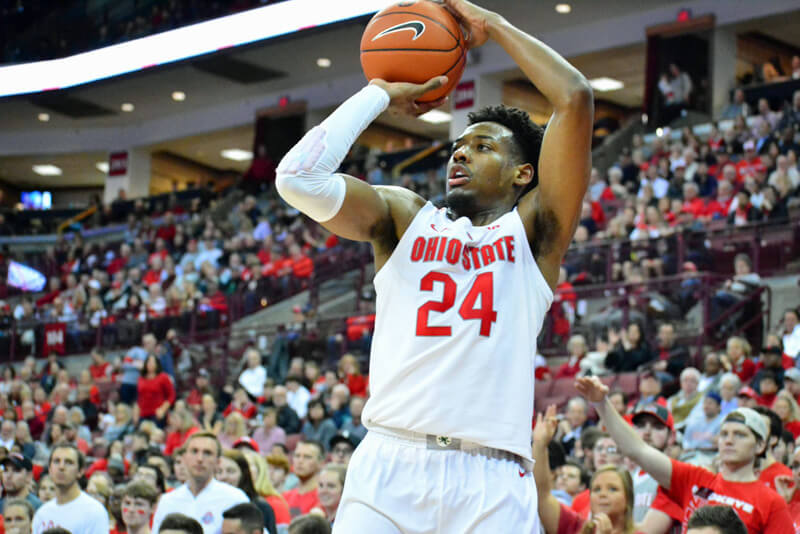 Indiana will look to snap a three-game home losing streak on Sunday when it hosts Ohio State. The Buckeyes are 15-7 overall and 5-6 in Big Ten play.

The game will be broadcast at 1 p.m. ET on CBS with Kevin Harlan and Dan Bonner on the call:

Indiana’s NCAA tournament hopes are in the crosshairs and with just eight regular season games remaining, the Hoosiers are running out of time to collect the wins necessary to go dancing.

Last weekend’s win at Michigan State snapped a seven-game losing streak, but Indiana couldn’t build on that triumph and lost on Thursday night at home to No. 20 Iowa. Indiana still has five home games remaining but three of them are against the Big Ten’s upper tier (Purdue, Wisconsin and Michigan State). That makes Sunday’s game against Ohio State pivotal. It could be the last time Indiana is favored in a game until the regular season finale against Rutgers.

The preseason narrative was that February’s home-heavy schedule could allow Indiana to hit its stride late in the season and build momentum heading into March. The reality now, however, is that Indiana’s abysmal January has left the Hoosiers with little margin for error for the remainder of the month.

Chris Holtmann did a terrific job last season in Columbus as he rode a Big Ten player of the year campaign from Keita Bates-Diop to a 25-9 record and a No. 5 seed in the NCAA tournament.

This year’s Buckeyes have taken a step back, but still remain in the hunt for another NCAA tournament bid. Ohio State had a rough January and lost six of seven games, but righted the ship in recent weeks with a road win at Nebraska and home wins over Rutgers and Penn State.

Kaleb Wesson is Ohio State’s go-to player on offense, but the Buckeyes have had trouble keeping him on the floor because of foul issues. The sophomore big man is averaging a team-high 14.9 points per game on 52.5 percent shooting from the field, but he’s eclipsed the 30-minute mark just twice in 11 Big Ten games. In Big Ten play, Wesson is averaging 6.6 fouls per 40 minutes. When he is on the floor, Wesson is a high usage post-up player who can also step out and hit the 3-pointer (10-for-20 in Big Ten play).

Because of Wesson’s foul issues and a lack of other post scoring options, Ohio State’s offense is perimeter heavy. Senior point guard CJ Jackson has the Big Ten’s seventh best assist rate (23.9 percent) and is a 40.8 percent 3-point shooter in league play. The duo of Rob Phinisee and Devonte Green will have to be much sharper defensively than they were in Thursday’s effort against Jordan Bohannon. Jackson is marginal inside the 3-point line (44.6 percent on 2s), so Indiana needs to work to keep him in the midrange as much as possible.

Luther Muhammad is one of the Big Ten’s best freshman guards and the New Jersey native can also hit the 3-pointer. Muhammed is shooting 45.2 percent on 3s overall on the season and 47.1 percent in league play. Muhammad owns the 15th best free throw rate (FTA/FGA) in conference play and is hitting 80.6 percent of his free throws.

Andre Wesson, Kaleb’s older brother, is Ohio State’s undersized four-man that can step out and also finish at the rim. Per HoopMath, Wesson is shooting 67.6 percent at the rim. In Big Ten play, he’s shooting 37.8 percent on 3s. When Kaleb Wesson gets into foul trouble, the 6-foot-6 forward gets some minutes at the five along with Kyle Young, who recently returned from a stress fracture in his leg that kept him out for four games. Young is making 78.2 percent of his 2s this season and is a hustle player who isn’t afraid to mix it up in the paint.

Graduate transfer Keyshawn Woods has really struggled with his perimeter shot. After making over 37 percent of his 3s last season at Wake Forest, Woods is shooting just 29.1 percent overall on 3s for the Buckeyes and 20 percent in league play.

Freshman point guard Duane Washington is probably looking at a reserve role for the foreseeable future with DJ Carton arriving on campus this summer. Washington, however, has been productive at times playing behind Jackson and had nine points in Thursday’s win over Penn State. Bloomington North product Musa Jallow is a limited offensive player who has started five of Ohio State’s 22 games. Jallow is shooting just 32 percent on 3s and 48.3 percent on 2s.

As mentioned earlier, Ohio State’s offense is perimeter heavy. The Buckeyes are generating 35.2 percent of their points in Big Ten play from 3-pointers, which is the second highest percentage in the conference.

Ohio State is both turnover and foul prone and doesn’t block any shots, either. Indiana will likely be looking to establish Juwan Morgan and De’Ron Davis in the post early and often to force Kaleb Wesson to defend. But the Hoosiers and the packline defense have been vulnerable to hot 3-point shooting teams and Ohio State is capable of knocking down triples if IU doesn’t close out properly. That was a consistent problem against Iowa and an issue that IU can’t afford to have happen again on Sunday.

The KenPom projection is Indiana by two and Sagarin likes the Hoosiers by three.

Realistically, Indiana needs to win on Sunday and at Minnesota next Saturday to keep its name in the NCAA tournament conversation. The Hoosiers already have 10 losses on the ledger and while they do boast several impressive wins, there also comes a point where the volume of losses is too much to overcome.

Indiana has played much better the last two games and if continues to play with that same energy and focus, it will be in most games the rest of the regular season. Sunday’s game will likely come down to how well Indiana can defend the 3-point line and whether Morgan and Davis can outplay Wesson in the post.